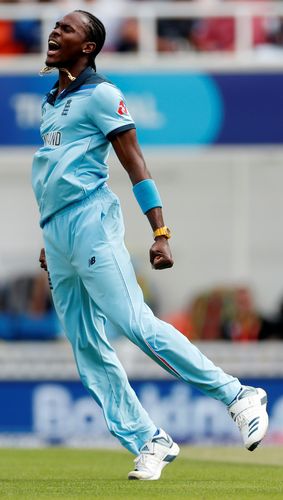 Everything about Jofra Archer is simple. Be it his run up, his bowling action or his approach to life and cricket. He bowls fast, usually above 140kmph, with the aim of hitting the batsman’s helmet grille and, of course, taking his wicket. His bowling figures are simple, too. As of now, they read—five ODIs, six wickets. Not much to rave about. Yet, the latest arrival in the world’s top-ranked ODI team has been hogging the limelight. Not only for his sharp bowling, but for his power hitting, too. Even Virat Kohli, the Indian captain and arguably the world’s best batsman, said he was England’s X factor in this World Cup.

So far in the tournament, Archer has figures of 3 for 27 against South Africa and 0 for 79 against Pakistan. In the former, he played a starring role in the decimation of the Proteas; in the latter, he learnt an early lesson in international cricket—it need not be your day every time. In the first match, he blew away the South African middle order and even hit Hashim Amla on the helmet; he had to retire hurt and get tested for a concussion. “He is a bit nippier than he looks,” South African captain Faf du Plessis said after the match. He would know, having faced Archer in the Indian Premier League and having watched his Chennai Super Kings skipper M.S. Dhoni get hit on his head during a match in Jaipur.

Archer was born and brought up in Barbados. His father is English, his mother Barbadian. He was playing for the Barbados and the West Indies under 19 teams when England fast bowler Chris Jordan, also from Barbados, saw him in the nets in 2012 and convinced him to switch to England for a brighter future. “I brought him over from Barbados,” Jordan, a regular in the England T20I team, told THE WEEK. “For someone to bowl with that pace with so little effort—even before he played county cricket—was amazing. Once he gets stronger, he will only get better and quicker. That kind of thing cannot be taught. Those were the early signs I spotted.” Jordan himself got a few snorters while facing the 16-year-old Archer in the nets. “He is a phenomenal bowler, cricketer, person,” he said. “I have literally watched him on his journey as a cricketer and as a person. He is very hardworking and any little chance he gets to improve his game, he diligently does it. This is a testament to his character—how quickly he has moved up and made it to the England ranks.” Jordan said Archer has taken to international cricket like a duck to water. “He operates in straight lines, very effortlessly, and there is no strain on his body.”

Both Jordan and Archer play for Sussex county, and were part of the 17-member squad that played Pakistan before the World Cup. Archer had qualified to play for England this March and, within weeks, there were loud calls to include him in England’s World Cup squad. So loud, in fact, that the selectors could not ignore them. “The selection panel has been impressed with Jofra Archer’s performances in domestic and franchise cricket,” said England’s national selector Ed Smith. “He is a very talented and exciting cricketer.”

During his county stint—he made his debut in 2016—Archer stayed with former England fast bowler and then Sussex fast bowling coach Jon Lewis. “I was his landlord!” said Lewis laughingly. He played a major role in Archer’s development as first-class cricketer. “Jofra is fundamentally a really good person,” he told THE WEEK. “He is humble, polite and goes about his business quietly. He is driven as a person as someone who wants to reach the top. [He likes to] watch and talk cricket all the time, wants to know what every other bowler is doing. He wants to make sure he is up to speed with what is going on around him.”

Michael Holding, the West Indies fast bowling great, first saw Archer bowl in the World Cup match against Pakistan. “Unfortunately, I had never seen Archer bowl before this World Cup and would not want to judge him on the little that I have seen in this game,” he told THE WEEK. “What is easy to see is that he has a nice, relaxed action, which helps him generate the pace that he has. That easy action should help him have a long career as far as physical fitness is concerned.”

Initially, when he moved to England, Archer was “very raw”, said Lewis. “He always had pace, but he was not quite as accurate as he is now. He does not miss his line and length. In white ball cricket, he has shown people what he can do. Hopefully, he will do the same with the red ball in his hand. He can generate a lot of movement off the wicket.”

Pace aside, Archer places mind over matter. “It is about his mind, his belief that he can get anyone out, can bowl at any phase of the game,” said Jordan. “With the new ball, in the middle overs, or at the death. He can fit into any situation.”

The clamour for including him in England’s World Cup squad grew louder after his impressive outing in the recent IPL. Playing for Rajasthan Royals, he took 11 wickets in 11 matches at an economy rate of 6.76. “He has been amazing,” said team head coach Paddy Upton. “He has delivered in every game. He is a highly skilled bowler, is able to structure his six balls, seems to know what balls to bowl at what time, and his execution is awesome.”

For Archer, this World Cup is just the beginning. That 0 for 79, said Lewis, should not bother Archer too much. “I expect him to bounce back. He thinks about his game, will come back better out of it,” he said. “He is still learning as a cricketer. He is just really interested in learning.”