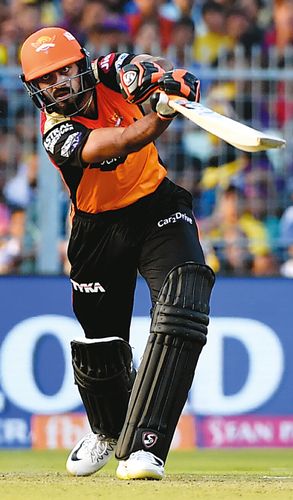 VIJAY SHANKAR IS NOT an archetypical ‘star’ cricketer. At least, not yet. He does not have tattoos on his rippling biceps, a designer face fuzz or a reluctance to speak. He talks with a lot of positive energy and is willing to share stories of his cricket journey.

The 28-year-old from Tamil Nadu, who plays for Sunrisers Hyderabad in the Indian Premier League, made his ODI debut in January 2019. Three months later, he is preparing to travel to England as part of India’s World Cup squad. His selection in the final 15 has aroused mixed reactions. It came at the expense of Ambati Rayudu, who had been earmarked as India’s no. 4 batsman early last year.

“After the Champions Trophy [in 2017], we tried quite a few people in that position,” says M.S.K. Prasad, chairman of senior selection committee had said while announcing the World Cup squad. “We did give quite a few chances to Rayudu. Vijay Shankar is three-dimensional. We are looking at him at no. 4 to begin with.”

Shankar is a firm believer in the Rahul Dravid school of cricket, and had played for India A under Dravid’s coaching. “I have missed a lot of cricket because of injuries,” he tells THE WEEK. “I came out of it by working really hard. I am someone who believes in my work ethic. I am true to myself in whatever I do—be it my rehab or my strength sessions.”

Shankar adds that the call to the team during the New Zealand series in January was unexpected. He, along with Shubman Gill, was picked to the team after K.L. Rahul and Hardik Pandya were suspended over their controversial episode of Koffee with Karan.

Shankar walked in to bat in Wellington in what was his fourth ODI. India’s score read 18/4. His 98-run partnership for the fifth wicket with Rayudu, in which he scored 45 off 64 balls, steadied the ship. India won the match by 35 runs. His temperament and quality of batting impressed many, though Rayudu was the top-scorer and man of the match.

S. Balaji, Shankar’s coach at India Cements since the age of 15, expected him to seal a spot for the World Cup. “Shankar impressed the team management with the quality of his batting,” he says. “In ODI, teams are keen on solid players.”

Shankar’s preparation for that series involved training in the nets using synthetic and tennis balls. “We do target-hitting each time he practises,” says Balaji. “That is a concept I adopted listening to a Roger Federer interview. With the fielding having improved so much, you need to get your angles perfect [for playing shots]. I knew that if the selectors go just by quality, he would be there; if they go by averages and experience, he might have missed.”

Shankar is looking at the World Cup as a learning experience. “In the New Zealand series, I played in different situations—batted and bowled... even bowled the last over,” he says. “I told myself, ‘These are big experiences for me’.” He adds that he did not worry about getting selected for the World Cup. But, Balaji says that when the team announcement happened, he “was over the moon”.

Former cricketer and commentator L. Sivaramakrishnan points out that Shankar’s innings with skipper Virat Kohli in the Nagpur ODI against Australia in March (46 off 41 balls) helped him seal his position in the squad. “Shankar is a very good runner between the wickets and rotates the strike well,” he says.

Asked about the pressure playing the World Cup, Shankar says: “There is pressure on everyone who plays for the country or for an IPL team. If I put extra pressure, I will not enjoy [the game]. It is about how I prepare [for the World Cup].”

Shankar has drawn praise from selectors and coaches for the way he has battled injuries ever since he made his First Class debut in 2012. S. Sharath, former Tamil Nadu skipper and selector, says what has stood out for Shankar is “first and foremost his attitude. He will always look at the team’s interest first. And, then, of course, his cricket—he plays with a positive intent.”

Shankar, who is currently Tamil Nadu’s limited-overs captain, calls 2016-2017 his most difficult season. “I was almost thrown out of the Tamil Nadu side at one point as I fractured my finger,” he says. “When I made my comeback, I was under pressure.” With a crucial innings of 95 against Mumbai in the Ranji Trophy, he sealed his place in the Tamil Nadu team.

However, another career-threatening knee injury came just before a tour to Australia as part of the India A team. “The doctor advised surgery. It was a big call for me to go for surgery or take injection, and play,” he says. “I spoke with my family and coach Rahul [Dravid] sir. All advised me to think about the long term.”

He credits his physio at the National Cricket Academy in Bengaluru, RajaniKanth, who oversaw his rehab after the surgery. “He was with me right through and kept motivating me,” says Shankar. “I recovered in four months, did well in the Ranji Trophy, led Tamil Nadu, and won the Vijay Hazare Trophy.”

Shankar says that his days in the India A team under Dravid changed him. He echoes Dravid’s cricket philosophy—the emphasis on work ethic, process and journey. But, unlike Dravid, he is not a voracious reader. “If I read a book, I fall asleep,” he says.

Sharath underlines Dravid’s impact on Shankar’s cricket. “Whoever has gone through Dravid’s process has become successful. He makes a player understand that this (cricket) is a lifelong process and [tells them] not [to] get carried away.”

Balaji is waiting for the IPL to get over to start Shankar’s focused training for the World Cup. “It is his first trip to England, but the conditions will be somewhat similar to New Zealand,” says Balaji. “His game is suited for English conditions. He is an old-fashioned cricketer with top hand control—an accumulator of runs who can also play shots.”