Keeping up with MSD

No doubt Pant has impressed with batting, but his glove-work is yet to match Dhoni’s 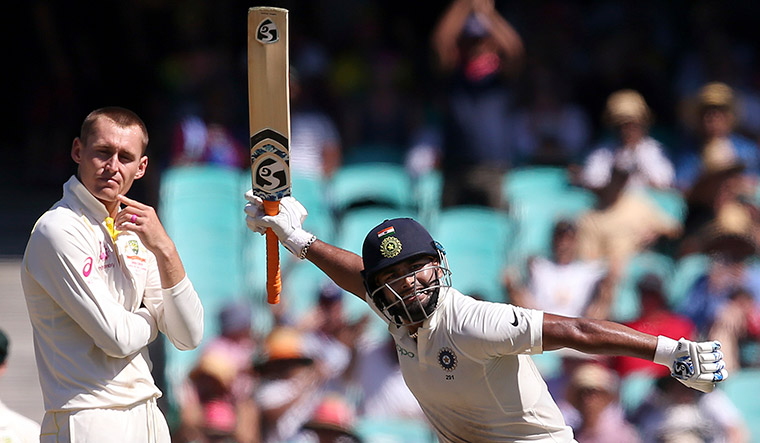 Punt on pant: Rishabh Pant celebrates his century in the Sydney Test | AP

WHEN AUSTRALIAN captain-cum-wicketkeeper Tim Paine took a dig at Rishabh Pant on being snubbed by selectors for the limited overs series in Australia and New Zealand, the Indian wicketkeeper batsman responded both verbally and with the bat. Pant’s unbeaten 159 in the fourth Test in Sydney helped India secure its first ever series win in Australia. He was India’s second highest run scorer in the series with 350 runs from seven innings, behind only Cheteshwar Pujara.

Pant’s potential has been there for all to see, for at least a couple of years. In the 2016 Under-19 World Cup in Bangladesh, the exuberant left-handed batsman opened for India. He hit two half-centuries in the group stages, including a record-breaking 18-ball 50 against Nepal, and followed it up with a century in the quarterfinals against Namibia.

The 21-year-old made his T20I debut for India in 2017 and became the first choice wicketkeeper in 2018, thanks to Wriddhiman Saha’s shoulder injury. Going by Pant’s performances, Saha’s place is by no means a certainty on his recovery from injury.

In Australia, he was bright behind the stumps, too, taking 20 catches—the most ever by an Indian stumper in a Test series.

“He will be a superb player for India in the future,” former India skipper Sourav Ganguly told the media in Kolkata. Another cricketing great, former Aussie captain Ricky Ponting compared Pant to Adam Gilchrist. “He is a real talent and [an] incredibly good ball striker,” Ponting told Cricket Australia’s official website. “He could play a lot of cricket for India in all three formats.” Ponting is also head coach of the Delhi Capitals, Pant’s IPL team.

While Pujara and Jasprit Bumrah were the standout performers against Australia, Pant and left arm, unorthodox leg-spinner Kuldeep Yadav also earned praise for their performances against the depleted hosts. Even as Australia continues to struggle with a depleted squad for the ODIs—their replacements just not measuring up to the exacting standards of the past—India is already in World Cup preparation mode. Of the four mentioned above, only Yadav has stayed back.

While Test-specialist Pujara’s return was expected, the BCCI has decided to manage the work loads of key players and rested Bumrah. Mahendra Singh Dhoni, who had a tepid run with the bat last year, is back in the scheme of things, and Pant will be honing his skills playing for India A in a five-match limited overs series against England Lions at home, under the watchful eyes of coach Rahul Dravid and assistant coach Abhay Sharma, a former wicketkeeper with Railways.

Syed Kirmani, one of India’s finest wicketkeepers, told THE WEEK: “I think he [Pant] is a very fast learner, a bundle of talent. He will serve India for a long time if he keeps his head on his shoulders.” Kirmani was not altogether approving of the chatter from behind the stumps, however he was all praise for Pant’s batting. “The manner in which he paced his innings in Sydney was absolutely wonderful,” said Kirmani. On Pant’s wicketkeeping, Kirmani said he still had a lot more to learn. “He lacks anticipation,” said Kirmani. “His movement behind the stumps, particularly to the spinners; he is getting up before the ball is pitched. His movement to side of the wicket needs work—a lot of diving practice is required, though he has the natural ability to dive.”

Former India wicketkeeper Kiran More, who has worked with Pant, echoed Kirmani’s views. “He has talent, but needs to be more polished, especially while keeping to spinners,” said More. “Keeping wickets in Australia is not difficult, but in India, the ball does not carry as much.” More added that with the bat, Pant was already a match-winner. Former India wicketkeeper and Pant’s former Ranji Trophy coach Vijay Dahiya said it is still “a learning curve” for Pant when it comes to keeping at the highest level. He added that Pant’s partnership with Pujara in Sydney showed that he is maturing fast as a batsman. Dahiya was very surprised that Pant was dropped from the T20I squad.

Pant is still very much central to Team India’s efforts to fill the gap left by Dhoni in Test cricket and his looming retirement from the shorter formats. More, who is also a former chief national selector, said Dhoni’s return to the squad instead of Pant is about giving the former enough game time ahead of the World Cup. There is no doubt that Dhoni will be India’s main wicketkeeper batsman at the World Cup, but selectors have got more options now with Dinesh Karthik still strongly in the mix and Pant improving. Chief selector M.S.K. Prasad has confirmed that Pant is part of Team India’s World Cup plans.

Kirmani, member of the 1983 World Cup winning team, is clear that India will have to go with Dhoni as first choice in such a big competition. “You need experience in tournaments like the World Cup,” said Kirmani. “Besides, he must be there, for youngsters like Pant to learn from him. Dhoni is still as competent with his glove-work as he was earlier.” More and Dahiya feel Pant could be the surprise package. Dahiya said he is the best option after Dhoni. “But mind you, there is no pressure on Dhoni,” said Dahiya. “He is above all pressure.”