What life at LAC is doing to ITBP jawans 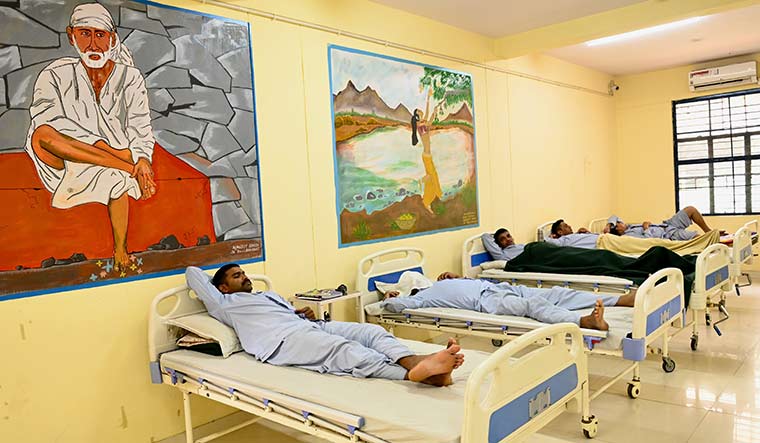 Tough mission: Jawans admitted to the ITBP Base Hospital in Delhi | Salil Bera

Shimla is usually pleasant during summer. And so, this April, we drove to the farthest corner of north India where Himachal Pradesh ends and Tibet begins―the Line of Actual Control. “Are you mad?” asked a deputy commandant of the Indo-Tibetan Border Police, based in Shimla. According to the weather update on his smartphone, the next few days would be anything but pleasant. He gave the go-ahead only after much persuasion.

The ITBP was raised in 1962 after the war to guard the Indo-Tibetan border. In 2004, the entire stretch of the India-China border came under the ITBP.

The Line of Actual Control is around 100km from Chitkul, the last Indian village along the LAC. “No one is allowed beyond Chitkul, except security forces,” said the ITBP officer. His weather update soon came true. We encountered heavy winds about 50km from Chitkul. Fearing nature’s onslaught, even the chai stalls called it a day at 3pm. Our car driver was worried that it would rain rocks from the mountains. His fears came true in Mastrang, the border outpost which is a two-hour drive from Chitkul. The road ahead was blocked, and the Army was at work clearing the rocks.

The road was lined with Army transit camps. The ITBP camp at Mastrang is is the last outpost―14,000ft high; temperature―5°C. Around 150 jawans are stationed here. Fifty of them are packed into a room lined with cots. The jawans, wearing windcheaters, were seeking warmth inside sleeping bags.

Sub-inspector Ashwini Rana will lead the team of around 150 jawans to scale the mountain from Nittal Thatch. A vehicle would take the troops to the last border outpost―Nakdum. The Army is constructing a road from Nakdum to Yamrang La, the last line on the LAC in the sector. But till the time the road is built, the jawans have to walk for 20km with arms, rations, water and winter gear to reach the LAC.

During the walk to the LAC itself, the water they are carrying will freeze. Many of them will get frostbite, some will have high-altitude cerebral oedema. Rana has had pulmonary oedema. “Many have lost their fingers. Limbs have been amputated, and some of them have died in avalanches as well,” he said.

The deputy commandant in Shimla said that in emergency cases, soldiers were treated at the local Army hospital and if it was a chronic case, they were shifted to the ITBP Base Hospital in Delhi. 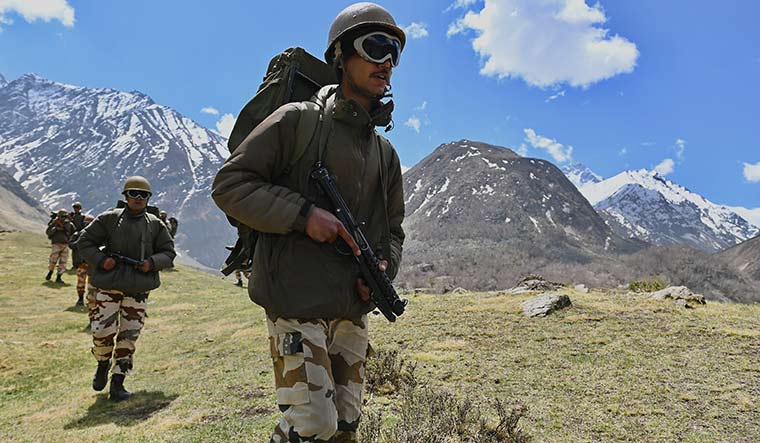 The jawans near Yamrang La are at an advantageous position as they are stationed on a hilltop and can keep an eye on the Chinese below. But, at times, the Chinese soldiers do come up during the change of guard and put up posters in Mandarin, instigating the jawans. ITBP soldiers are taught Mandarin as part of their training. “The poster headlines clearly state that the Chinese soldiers would like to redraw the LAC,” said Rana. “Sometimes, the posters have objectionable language against our leaders.”

But Indian soldiers never react to such provocations. “Special order has been given not to fall into their trap,” said an ITBP commandant at the headquarters in Delhi. “For, they could turn it into a gun battle like in Galwan or as tense a situation as in Doklam.” Rana said it was a mind game between India and China.

Himachal Pradesh and Uttarakhand share a 545km border with Tibet. In Himachal Pradesh alone, around 6,500 jawans are deployed in 32 border outposts, covering 25km to 30km per outpost. So, each border outpost would have around 200-odd jawans that many believe is too small a number, considering the length of the LAC. However, a 40km stretch between Himachal Pradesh and Ladakh has been left unguarded by the ministry of home affairs. THE WEEK spoke with Sanjay Arora when he was the director general of ITBP. “The ministry of home affairs is aware of the situation and appropriate action would be taken, considering the sensitivity of the place,” he said. Guarding the border amid a tough terrain in harsh weather and against an ever-invasive enemy demands grit of a higher level. And, some crumble, physically and mentally. At the Base Hospital in Delhi, ITBP jawans fill up beds, not just with physical injuries but more so with mental ailments.

Take, for instance, Niraj Kumar, who was deployed in Leh. He became lonely, forgetful and suicidal. Things were fine at home and work. A father of two sons, Niraj, 43, had received a salary hike thanks to the implementation of the seventh pay commission. But Niraj has no clue why he feels suicidal. All he knows is that when he needed to be tough in the extreme conditions at the border, he would turn “angry and restless” instead. Chief Medical Officer Dr Prashant Mishra called it a case of extreme depression. “I started [him on] yoga and meditation,” said Mishra, a psychiatrist. “Then there was cognitive behaviour therapy. We gave him antidepressants along with anxiolytics to lift his mood.”

Amitabh Agnihotri, 35, who originally hails from Jharkhand, has served in high-altitude areas for 14 years. That took a toll on his mind and marriage, which ended in divorce. When he would go home on leave, he would have constant fights with his wife. Unaware of his depression, she left their home, saying she should not have married a dark-skinned man like him. “I started crying when she left me,” said Agnihotri. “I had to sign the divorce paper otherwise she would have slapped cases on me. I decided to commit suicide because I was dark and no woman would like me ever. I wanted to be left alone.”One day, he tried to hang himself. He was saved by his brother in the nick of time. “He had a fixed idea about his dark complexion,” said Mishra, who asked his team to treat Agnihotri with caution. Even the medicines were fed to him by the nurses. He was also given counselling. “He was taught why a job is more important than ending his life and what he could do with his salary,” said Mishra.

Mahendra Kumar Saini from Rajasthan got a “healthy posting” after serving in high-altitude places in four states. The only healthy part about the posting was that it was in the plains―he was sent to Chhattisgarh to battle Maoists in 2021. His wife had been requesting him to take her along on his postings, even to the high-altitude areas, ever since their wedding in 2017. He tried to tell her that such areas do not provide good accommodation to families, but she would keep insisting. “In Chhattisgarh also, she wanted to come with me,” he said. “When I refused, she filed for divorce.”While they were married, Saini had paid Rs10 lakh bribe to a government agent to get his wife a teacher’s job. He had borrowed the money for the bribe. Now, his wife has asked for alimony to care for their three-year-old daughter, and Saini has now taken another loan of Rs12 lakh to fight the divorce case, which involves dowry charges. He is left with just Rs25,000 from his salary every month. The divorce battle coupled with financial woes pushed him into depression. Mishra said that without telling his seniors or peers, he consulted a gastroenterologist, cardiologist and a neurologist. He would pop 10 tablets every night. His battalion commandant found him dizzy one day, and he was sent to the Base Hospital in Delhi. Mishra reduced his tablets to two per day. “With pharmacological and non-pharmacological treatment, he is now 85 per cent fit. It will take some time for him to be fully fit,” said Mishra.

Sources said the hospital gets around 500 patients from the one lakh strong force every month. The number is low, say officials, because ITBP has a psychological guide in every battalion.

What makes it worse for ITBP jawans is that when they are not guarding the LAC, they are posted either in Kashmir or Chhattisgarh, where they have to face militants and Maoists, respectively. And, sometimes, such postings scar their families, too.

Gourishankar Rao, a constable from Andhra Pradesh, was posted along the Ladakh border since 2017. For three years, he did not communicate with his wife and two children, aged nine and seven. One day, he was told that his wife had hanged herself. “I came to know about her death after a week. I went into severe depression and could not bear the pain,” said Rao, who is being treated at the Base Hospital in Delhi.

But there are those like Rahul Kumar Rajak, 21, from Bihar, who are still bright-eyed about their future in the ITBP. “Adventure is a top priority for me,” said Rajak, who joined the force last year and is learning Mandarin. “Could you imagine that I would be surrounded by snow-laden mountains?”

May the light never leave his eyes.