Alternative romantic partnerships that cherish the big, bold spaces between them 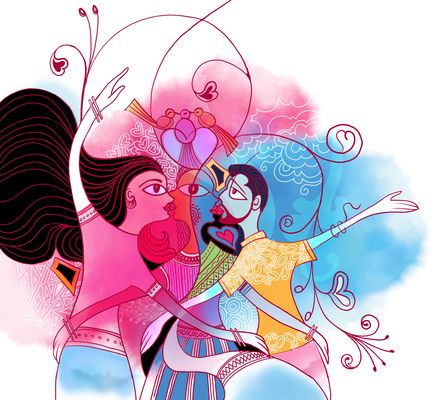 By definition, solo polyamory means having several intimate relationships without a primary partner. One chooses to have a single, independent life in the midst of a vibrant dating circle with multiple meaningful connections. When Sejuti Biswas (name changed) learnt about the phrase in June 2020, she had an epiphany of sorts. Just before lockdown started in March, Biswas, a Delhi-based freelance publishing professional, was fresh off a breakup. While isolating in her two-room flat, she reached out to her once-distant neighbour, college friends, cousins, mother, random dates, her two cats and her paintbrushes to become functional again. Theoretically, she knew that it took a sum total of all relationships to feel happy and complete, and not just a romantic partner. But it was really a pandemic-induced lockdown that made her get off the “relationship-escalator”—the bundle of social scripts on how a romantic union is supposed to develop, from attraction and love to sex, cohabitation, marriage and children. “I have had a lot of romance in the conventional sense but that hasn’t led to a primary partner,” says Biswas, now 39. “Initially, I was not okay with it, but later I realised it is such a great thing. It is like you don’t have anything to lose. I discovered that every experience is an end in itself. I felt quite free.” There are multiple combinations that are acceptable now. “People can have sex without getting attached. People can only be emotionally attached. They can only meet once a year. Or, communicate only via text. Or, never meet at all. All of it is valid,” says Biswas, enumerating the many patterns and permutations in her own love life.

Post-pandemic, post-traumatic, post-romantic. Is it fair to say, as we slowly emerge from the clutches of a receding virus, that there is a new consciousness around how we understand love and relationships? The internet is awash with research findings on how the pandemic transformed relationships for better and for worse. Like, lockdowns forged better connections between couples, married or dating; divorce rates shot up during pandemic. The findings are confounding at best. But few surveys account for pre-existing vulnerabilities or the fact that how we define and experience love needs to be re-evaluated. A monumental health crisis made us dissect distance and isolation at its most visceral level.

“I have seen a lot of festering insecurities around finance flare up. There have been uncertainties around employment, whether to have children or not, and mental health issues like anxiety disorders have been further triggered. Boredom was on the rise and so was infidelity,” says couples therapy expert Shivani Misri Sadhoo. “The result is that people are now much more cautious about what they want in marriages and relationships. They are also a lot more responsible.” She attributes these changes to a culture of embracing social distancing protocols since the pandemic started.

Mumbai-based advocate Dhruti Kapadia saw a 130 per cent jump in divorce cases in 2020 and 2021, compared with pre-Covid times. But the number of uglier divorces came down with more amicable settlements and out-of-court resolutions. “Because the courts were shut, mediation was hugely responsible for fast-tracking divorces,” she says. “Before Covid, people didn’t care for this kind of dispute resolution. They would go, abhi court mein dekhenge (we will see you in court).”

Even with so many dysfunctional relationships ending, the self continued to stay like seashells after a hurricane. Prachi Gangwani, author of Dear Men: Masculinity and Modern Love in #MeToo India, says that couples have never felt more helpless or experienced this scale of loss of control over relationships, whether they lived together or apart. And, there is a new awareness around respecting one’s needs. “I think what has happened is that people have started to pay more attention to their own lives, their professional and social ambitions, where they want to live, what kind of lifestyle they want to have, what kind of jobs they really want,” says Gangwani. “The sort of structure we took for granted in the past has been shaken because of the pandemic. And, experimenting with different types of relationships is just a side-product of that.”

For her book, she mostly interviewed married men all through 2020 and early 2021. The context then was understanding what sexual boundaries mean to Indian men in the shadow of the #MeToo movement or why they hurt the women they love and how they manage traditional gender roles. But if she had to re-situate her book as ‘Dear Men: Masculinity and Modern Love in #Covid-19 India’, there is only one thing she would like to highlight: mental health. “Because men are less likely to recognise their own mental health concerns and even less likely to seek help, the impact of their unresolved issues on their relationship is, quite often, much higher,” says Gangwani.

Philosophers have for centuries inquired into the meaning of love. But for the purposes of this story, there are some whose writings are more relevant (or accessible) to the workings of modern-day romance. The “existentialist power couple” Simone de Beauvoir and Jean-Paul Sartre lived in an open relationship for more than 50 years. They talked about couples zealously guarding their individuality and managing their differences. How did this pan out in their lives? To give an example, in spite of their intimate relations, Beauvoir and Sartre did not live under the same roof. They often met in cafes to trade notes on their respective lovers, among other things. Plato, in his “ladder of love” theory, espoused spiritual love to be the highest and purest form of love, while for German philosopher Arthur Schopenhauer all the ecstasy around love was just an illusion, a non-stop headache except for sex.

Perhaps the most lucid illustration of post-romanticism has to be attributed to British philosopher Alain de Botton who with his hugely successful YouTube channel—The School of Life—has developed a global following. He says that romanticism as the ideological foundation for love has been a disaster. Romanticism teaches us to be hopeful of marriages to last a lifetime and retain the excitement of a love affair. It always unites love and sex or rather elevates sex to the supreme expression of love. It discounts marriage of reason, and insists on acting on instinct by entering “a marriage of feeling”. He has a list of alternative models like the parenting relationship, which is most concerned with securing the well-being of children while parents can find partners elsewhere. Or, the yearly renegotiated relationship union, where it is assumed that there will be an audit after the expiration of a year, perhaps like an appraisal in a contract.

Funny as they are, these ideas force us to revisit our most complacent assumptions about how we have learnt to enter, enjoy or suffer romantic unions. But Dr Sraboni Bhaduri, a Delhi-based psychologist, says that so-called alternative relationship models start to take shape at a certain stage in an ever-evolving, highly complex phenomenon called romantic love. “The pull is mostly towards converting it back to the conventional. But whether it is a conventional kind of union or an alternate one, both end up being a search for the mythical,” says Bhaduri, who believes that in the present generation women have covered a lot of ground as empowered individuals. “The way men react to this when studied as a cultural phenomenon in urban Indian metros is leading to several relational issues. A man’s mother and a man’s partner are vastly different people today.”

According to UN figures released in 2020, India is home to the world’s largest youth population, with almost 600 million below the age of 25. When Tinder set up its first international office in India in 2016, 50 per cent of the country’s population was under 25. This particular age cohort continues to dominate the user base for Tinder, which truly introduced the concept of dating and hookups in the Indian cultural landscape. “Dating has become more fluid and honest with more than 62 per cent of singles in India not looking for a committed relationship and preferring friendships with romantic potential, casual dating, whilst remaining noncommittal in defining what they want and seeking more open-ended relationships,” says Ahana Dhar, communications director at Tinder India. “This new generation of daters are continuously asking for more from us: more ways to show off their authentic selves, more ways to have fun and interact with others virtually, and more control over who they meet on Tinder and how they communicate. IRL (In Real Life) dates have become more about experiential activities than traditional icebreakers.”

For Arnab Deb, 29, going “parasocial” has helped him train his mind to be happy with the little he has. By “little” the assistant professor of literature in Kolkata means his personal portrait of the famous French actress Juliette Binoche. Parasocial relationships are long-term, one-sided affairs with someone far away, typically a celebrity, or a “face-to-face relationship between spectator and performer [that] may be governed by little or no sense of obligation, effort, or responsibility on the part of the spectator”. Deb is most enamoured by Binoche’s depiction in Iranian auteur Abbas Kiarostami’s 2010 film Certified Copy, where two strangers who meet for the first time in an Italian town hit it off so well that they seem as close as a long-married couple—romantic possibilities Kiarostami could not have explored in a more conservative Iran. “I will never meet Binoche in the bus, tram or the rickshaw I take around the city,” says Deb. “But in my subconscious mind we know each other well. I become the stranger who can pull her out of her unhappy marriage, if only for a day. And I keep playing and replaying the picture of happy domesticity. It is realistic enough for me to keep going, to feel more hopeful when my own real relationships are rocky.”