Titanic at 25: The little-known mystery of India’s own Titanic 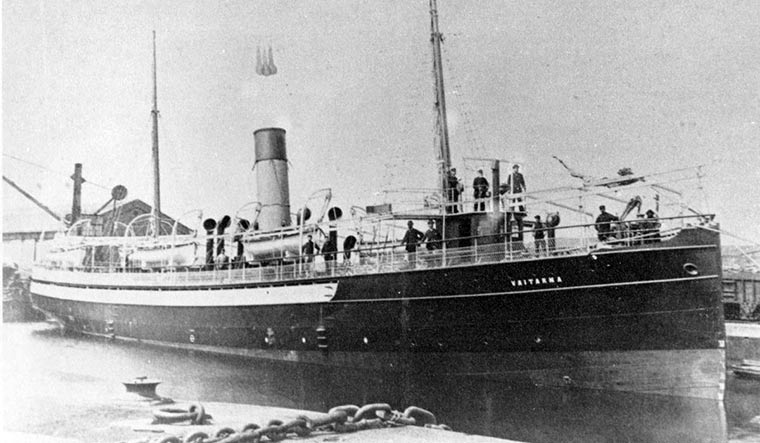 Vanished without a trace: The SS Vaitarna.

More than two decades before the sinking of the RMS Titanic in 1912, an Indian-owned passenger ship, the SS Vaitarna, sank off the coast of Gujarat. Not many have heard of this tragedy, the records of which are usually hard to come by. But the available information is somewhat sufficient to piece together a narrative.

The SS Vaitarna was known locally as Vijli, or Haji Cassum ni Vijli, after Cassum Ibrahim Agboatwala aka Haji Cassum, who was the captain of the ship at the time of the incident. The name Vaitarna may have come from the river in Bombay Presidency; the local name, Vijli (electricity), derived from the ship being lit up with electric bulbs. This was done long before external lighting was made mandatory for safe navigation at sea.

The SS Vaitarna shuttled between Mandvi in Kutch and Bombay, carrying passengers and goods in around 30 hours against a fare of 08. Stories around the sinking of the ship have led to it being dubbed the ‘Titanic of Gujarat’.

On November 8, 1888, the SS Vaitarna set sail for Dwarka and, later, Porbandar. Owing to bad weather, it was unable to berth at Porbandar and headed for Bombay. She is believed to have been wrecked in a cyclonic storm before reaching Bombay. Apparently, 703 passengers were on board. The number would be higher if additional embarkations, usual in those times, are factored in. At the time of the event, casualties were estimated to be between 700 and 900.

On the day of the fateful trip, say sources, there were 13 wedding parties on board and several students headed for Bombay to appear for their matriculation exams.

The Vaitarna was owned by A.J. Shepherd & Co. in Bombay and built by Grangemouth Dockyard and Co. Ltd in Scotland. Its keel was laid in 1882 and the ship was launched in 1885. The three-year construction period is indicative of its large size and sophistication. The engines were made by Dunsmuir & Jackson in Glasgow and the ship was registered in Glasgow itself. Her value was estimated to be 10,000 pounds, and she was insured for 4,500 pounds.

Haji Cassum, the ship’s “Musalman skipper”, was an aristocrat from Kutch who held tracts of land between Borivali and Dahisar in Bombay, had his office on Abdul Rehman Street, and lived in Malabar Hill.

Mahomedbhoy Dawood, captain of the Savitri, the vessel that was sent to search for the Vaitarna, had known Cassum for many years. Dawood knew Cassum as one of the most careful navigators.

The fading saga of Cassum and the Vaitarna was gleaned from a few rare surviving archives. Two triggers call for revisiting the tragedy. This is the silver jubilee of the release of Titanic, the blockbuster starring Kate Winslet and Leonardo DiCaprio. Secondly, in March, the Antarctic explorer Ernest Shackleton’s ship—the Endurance, which sank in 1915—was located in the Weddel Sea, six kilometres from where it had disappeared. For a 107-year-old shipwreck, the Endurance was in fairly good condition.

Unlike the original Titanic, the Vaitarna did not leave behind survivors. In fact nothing of the ship’s wreckage could be traced. The Return of Wrecks and Casualties in Indian Waters (1888), a report by the then government of India, claims that when the Vaitarna left Mandvi for Bombay, she was efficiently manned and fully equipped. Her hull and machinery were in good order. In the report, a marine engineer known as Mr Macintyre said the Vaitarna could safely pass through a cyclone. The storm that wrecked it would have been considerably violent.

That the Vaitarna left no survivors indicates that the ship did to have life boats. A ‘marine court of inquiry’, set up by Bombay Presidency to investigate the circumstances that led to the sinking, said the Vaitarna was ill-equipped on the safety front. The aneroid barometers used aboard steamers such as the Vaitarna were later found to be faulty. The barometers would have failed to forecast stormy weather.

Much effort was undertaken to locate the remains of the steamer. The Savitri, under Dawood’s command, did not find anything. A huge sum of Rs14,050 was spent in search of the Vaitarna. The shipping company faced persistent inquiries from anxious relatives of the victims, some of whom even promised to spend large amounts on charity if their loved ones were discovered. Just a day or two after the incident, newspapers like The Pioneer, The Bombay Guardian and The Times of India not only narrated the entire incident, but also went on to report the unsuccessful steps taken to look for the wreckage.

The “Vaitarna disaster” was the lesson that reformed India’s shipbuilding and navigation systems. There was realisation about the need for relaying early, credible forecasts about storms and better arrangements for life-saving equipment in passenger vessels.

Mishaps of such monumental stature leave a deep and lasting impact. A famous folk song—‘Haji Cassum, tari vijli re madhariye veran thai’ (Oh Haji Cassum, your Vijli has sunk to the bottom of the sea)—perfectly commemorates the story of Vaitarna.