Titanic at 25: A 'posthumous' gift from India's own Titanic

How the gift became a treasured family heirloom 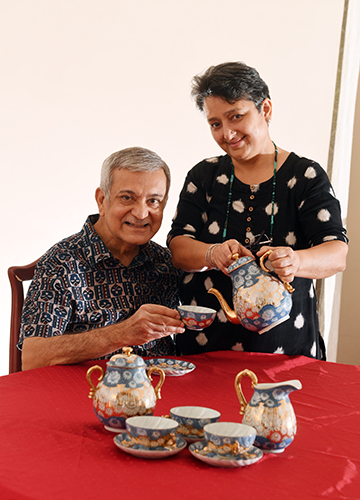 Tastes of yore: Saeed Ibrahim and wife, Naila, having tea in the bone china set that has become a family heirloom | Bhanu Prakash Chandra

November 8, 1888. It is a Thursday, dull and slightly overcast. The usually staid seaport of Mandvi in Kutch has come alive with activity. There is jubilation and excitement in the air as a giant new ship, the SS Vaitarna, prepares to set sail from Mandvi to Bombay. Throngs of curious bystanders have gathered on the pier side to admire the vessel. Being the first steamer to be lit up with electric bulbs, the Vaitarna is nicknamed “Vijli”, or electricity.

The dock area buzzes with activity, as there are several marriage parties bound for Bombay with a fully equipped Gujarati musical band. Running hither and thither, trying to get a last-minute passage, is a motley group of students headed for Bombay to appear for the matriculation examination. Among the other passengers waiting to board the ship are an anxious couple, Hajra and Jan Mohammed, my great-grandparents. They are keen to reunite with their 16-year-old daughter, Aisha, who on a previous visit, had stayed back in Bombay with her mother’s sister. They are planning her wedding and Jan, who runs a profitable crockery business in Bhuj, has already ordered a bone china tea set from a porcelain manufacturer in Staffordshire, as part of Aisha’s wedding trousseau.

At noon, the Vaitarna leaves Mandvi with 520 passengers and 43 crew members. She reaches Dwarka, picks up an additional 183 passengers, and leaves for Porbander. But because of bad weather, she does not stop at Porbander; she heads for Bombay.

She would never reach Bombay.

Later that evening, the Vaitarna encounters a heavy cyclonic storm. High, gusty winds and torrential rain produce gigantic waves that lash the sides of the ship, tossing it like a mere toy. The ship is ill-equipped to withstand such tempest. After a valiant battle with the sea, she sinks off the coast of Mangrol.

The ship is declared missing the following day. Bombay Presidency and shipping companies send out steamers. But there are no survivors. No wreckage, no debris, and no bodies are found. Vaitarna has just vanished; its passengers and crew are consigned to a watery grave.

News of the Vijli’s disappearance is slow to reach the families in Bombay. When it does finally get to them, it is met with shock and utter disbelief. Aisha, who would become my grandmother, is devastated. Her cries of anguish echo through the house; no words can console her.

One day, her aunt informs her that a consignment of goods has arrived in her name from England. It is the bone china tea set that her father had ordered for her. It is a beautiful blue-and-gold set of the finest egg-shell china. Six dainty cups and saucers, a large and elegantly shaped tea pot, milk jug, sugar bowl, half a dozen dessert bowls and an equal number of side plates.

Aisha is overwhelmed. This unexpected, posthumous gift from her parents lifts her spirits. She feels engulfed by their loving presence. Where other attempts to console her had failed, this symbol of her parents’ great love for her finally brings her comfort.

Orphaned at the age of 16, the void left by the loss of her parents remains with her throughout her life. But, with the unstinting support of her family, she learns to grapple with her loss and face life with equanimity. She grows from childhood to womanhood, marriage and motherhood.

My grandmother’s 19th century bone china tea set has come down to us as a family heirloom, and it has been the inspiration behind my book, Twin Tales from Kutch.

—Saeed Ibrahim is a Bengaluru-based author.