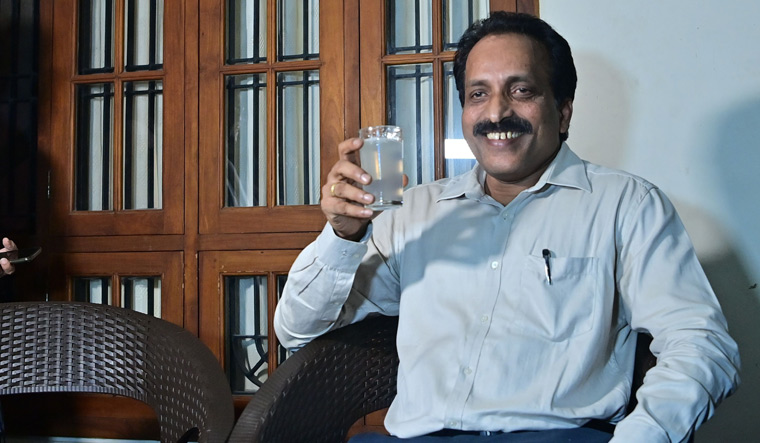 He is a film buff, and has offered to sit for a session dedicated only to discussing film dialogues—be they from potboilers or classics, Akira Kurosawa or Adoor Gopalakrishnan. S. Somanath, 58, the chief of Indian Space Research Organisation (ISRO) himself has a cine star flamboyance about him, with his thick mop of hair, dark moustache and stylish mannerisms. Unlike the stereotypical scientist, he is an excellent, if breathlessly fast-paced, communicator, who can convince not just top decision makers about a proposal, but explain rocket science to school students in a way that they see themselves flying out in a spaceship.

The rock-star personality hides the keen mind of a rocket scientist and aerospace engineer that has made him ISRO’s go-to trouble-shooter. Whether it was fixing a last minute issue with the first PSLV launch in 1994 or detecting the helium leak in the GSLV Mk III rocket for Chandrayaan-2 in 2019, Somanath was part of the team.

He takes over at a time when India is entering a new age in space, opening up for private enterprise. At the same time, ISRO itself is emerging from the setbacks of the pandemic. He has the task of flying Indian astronauts into orbit and landing a probe on the moon. Here is Somanath, himself, in conversation with THE WEEK:

Q/What will be your top priorities as you take charge? There appears to be a lot of unfinished work at ISRO.

More important, now, is to give direction for the future, and a lot is going to happen in this front. The government has started reforms in the space sector, but it only gives an overarching idea. The department of space has to convert it into an action plan. We need to create new verticals.

We created NewSpace [India Limited]. A top priority is to get it fully functional, so that new actors can come in. We also have to make new policies. At present, there is no legislation or policy directing how new players can enter the space sector. We need to work out legal issues for activities like launch authorisation and frequency management.

A third aspect will be on how to convert the space sector into a bigger operating environment and bring in more business. Technology is inspiring, but it will sustain only if it gets into a business environment, producing self-sustaining results. Otherwise, our space sector will continue working as a government-subsidised programme.

A/We will make the human-rated titanium sphere, in which the team can descend to a depth of 6,000 metres. It will be two metres in diameter and made of titanium. When we learnt that National Institute of Ocean Technology (NIOT) was looking for a shell manufacturer, I offered that ISRO team up. K. VijayRaghavan, the principal scientific advisor to the government of India, liked our proposal and we got the mandate. Various stages of manufacture will be at different facilities across India.

Q/There are big ticket missions, which seem to be behind schedule. Will their deadlines be shifted?

A/I have not studied them, so I cannot comment on it. We have been working on deadlines given by my previous chairman, but if I have to answer your question, I will have to first study it myself. We are working on big exploratory missions—Gaganyaan, Chandrayaan-3, the solar probe Aditya. Many spacecrafts were waiting to be launched, too.

Q/How much has the pandemic impacted ISRO’s work?

A/It has certainly impacted us in a big way and made us think about evolving another work model. At present, our work is spread across various centres in the country, it is not under a single facility. The model was evolved to make use of the strengths of various facilities and minimise costs. However, it entails a lot of travelling of personnel and transporting material back and forth; every activity cannot be shifted into the virtual mode.

Take the example of making a cryogenic engine—it involves at least five work centres spread across the country. To conduct a launch from SHAR [Sriharikota Range] several teams of people have to travel at various stages. Our model created a bottleneck during the lockdowns. We did what we could in a limited way, but the pace was greatly reduced.

Q/What lessons did ISRO learn from the pandemic?

A/(Laughs) Why just ISRO, the country, the world, has learnt a lesson that despite medical advances, pandemics are possible and that they can disrupt economies and livelihoods. But we are good at finding solutions to problems. We developed new mechanisms for remote inspection of manufacturing, new systems of procurement.

Q/How do you see ISRO evolving over the next few years?

A/Since I am secretary, department of space, I will not just talk about ISRO, but the entire space sector. The department should not just remain a promoter of ISRO, but an enabler for anyone who wants to create new enterprises, new technologies. ISRO will always remain the prime organisation with technological supremacy. I see the space sector growing substantially; its monetary value should grow three to five times the present amount.

Q/ISRO has started space explorations. Will we see space tourism next?

A/Space tourism is happening elsewhere, but it can never be a priority for ISRO. How can we use public funds for such activities? A private entrepreneur, however, can always take it up as a commercial activity in the country, taking advantage of the new space enterprise-enabling outlook of the government.

Q/Will there be militarisation of space under the new policy? What will be your role in it?

A/Space can be used for peaceful or not so peaceful purposes. We are a peaceful organisation; we develop technology for peaceful purposes. There are departments—armed forces and strategic groups—which are mandated with protecting India’s strategic assets. It is not the mandate of the department of space or the ISRO. We are technology holders of many things, whatever help is required, we will continue to give.

Q/How do you want to see ISRO evolve during your tenure?

A/I would like to see the substantial change and expansion. The type of inspiration ISRO has created over years needs to be sustained.