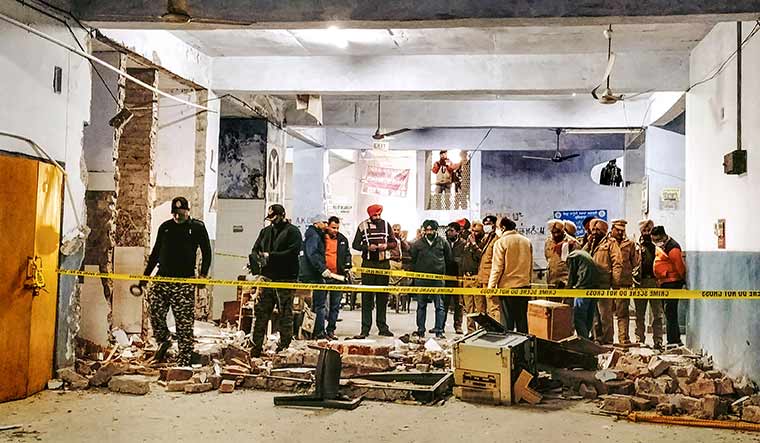 Sucker punch: Security personnel at the site after an explosion at the Ludhiana district court complex on December 23, 2021 | PTI

The Punjab Police was still licking its wounds following allegations that it failed to provide adequate security to Prime Minister Narendra Modi during his visit to the poll-bound state, when it was tipped off about a bomb threat near Amritsar.

The Special Task Force was alerted on January 14 that an improvised explosive device (IED) was about to go off at the Attari market area, barely two kilometres from the border with Pakistan. Troops were alerted; a bomb disposal team rushed to the spot and deactivated the 5kg device. The IED contained 2.7kg explosives, 1.3kg iron balls, two iron containers, three electric detonators, one timer switch and seven batteries.

As the country moves into yet another election season, security agencies are worried about ensuring the safety of not just the VIPs, but also the common man, as newer threats continue to emerge. Punjab goes to the polls on February 20, while elections are also being held in Uttar Pradesh, Uttarakhand, Manipur and Goa.

BJP national general secretary Tarun Chugh has asked the Punjab government to issue a white paper on border security in view of the serious security threats ahead of assembly polls. He said the Congress government was trying to push its lapses “under the carpet” and was “playing with national security in the border state”.

The alarm being raised over the prime minister’s security breach might have given politicians a stick to beat each other, but rogue drones flying in from Pakistan with guns, grenades, and IEDs masked as tiffin boxes are making life difficult for security forces. 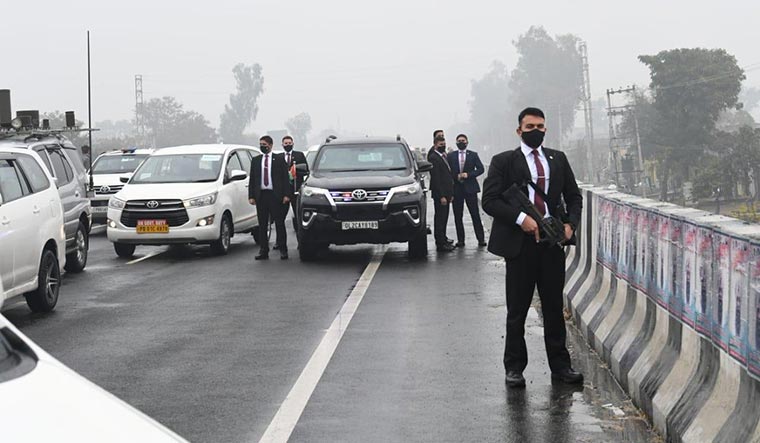 “The challenge is not only about securing the VIPs who are on the move during the election season, but also tackling multiple threats to convoy movements, crowds and gatherings,” said a senior police officer from Punjab.

Sticky bombs are the latest IED threats. Magnetically attached IEDs (MAIEDs) or sticky bombs were used by the Taliban in Afghanistan to conduct targeted strikes by attaching them to vehicles. “Most of these IEDs are sophisticated in nature and indicate the role of state or quasi-state entities,” said M.A. Ganapathy, director general of the National Security Guards (NSG), in an exclusive interview with THE WEEK.

At least 16 IEDs have been recovered by security forces in the Punjab and Jammu sectors in recent months. Most of them are planted in tiffin boxes with magnets that can stick to targets and cause maximum damage. These IEDs come assembled from across the border—air dropped in many cases—and have made their way even into a court complex in Ludhiana, where one exploded on December 23.

Another device was found and defused by the NSG in the Ghazipur flower market in Delhi on the same day the Attari bomb was found. In Delhi, the IED was on a timer, but the NSG’s bomb disposal squad was quick to neutralise it. However, the sophistication of the device was remarkable, with little chance of failure. So far, the NSG has not found any links between the MAIEDs used in Afghanistan and the sticky bombs being smuggled into Jammu and Kashmir and Punjab.

While the SPG’s mandate is to provide proximate security to the prime minister, organisations like the NSG have a much broader mandate, providing security to former prime ministers, serving and former chief ministers and other leaders facing serious threats. Protection detail by the NSG’s Black Cat commandos, who gunned down Pakistani terrorists during the Mumbai terror attacks in 2008, has become a status symbol for VIPs. Presently, the NSG is guarding 11 VIPs, after pruning its list to focus on emerging security challenges facing the country (see box).

Not much is talked about the NSG’s bomb disposal squad, which has been quite active in the past few months. The squad flew to the Air Force base in Jammu last June, when drones dropped explosives there. It has also been making regular visits to international borders in Jammu and Punjab. “There is turbulence on the international border,” said an intelligence official. “Multiple agencies are at work to neutralise the threats.”

The NSG’s bomb disposal squad provides regular, specialised six-to-ten-week training to batches of Black Cat commandos at its base in Manesar, near Delhi. It also collates and analyses data from threats across the globe, like the January 17 bomb attacks at a major oil facility in Abu Dhabi.

“Whether it is the VIPs or the common man, the need of the hour is to keep pace with the changing threat landscape,” said retired IPS officer D.P. Sinha, who was secretary (security) in the cabinet secretariat and special director in the Intelligence Bureau. “Only a few security forces are doing it.”

As threats have metamorphosed, VIP security challenges have also moved from the physical to the technological realm, said Sinha. “There is an urgent need to build expertise in handling new age threats like drone strikes and bombs and explosions triggered by mobile phones,” he said.

Senior officials involved in VIP security duties said whenever a politician with a high threat perception moved around in public, especially during election campaigns and rallies, the parameters of threats multiplied manifold. During such times, more than the number of boots on the ground, what is important is adequate training, right equipment and seamless coordination between various security forces. The absence of one or more of these elements can lead to incidents like the security breach of the prime minister.

“State governments ask for several companies of Central forces during elections. The focus is on numbers rather than expertise,” said a paramilitary officer. Often, there is lack of trust and inadequate coordination between Central and state forces. This is more prevalent in opposition-ruled states, which makes the job of security agencies tougher.

A glaring example is West Bengal Chief Minister Mamata Banerjee’s refusal to avail the security cover provided by Central agencies. While campaigning during last year’s assembly polls, she suffered a foot injury and had to seek treatment, which she alleged was a “conspiracy” against her. Yet, she refused the Union home ministry’s offer of maximum possible security. She continues to be guarded by special commandos of the state police. “Mamata has not asked for protection by the NSG or any other Central force,” said a Union home ministry official.

O.P. Singh, former Uttar Pradesh director general of police, said although law and order was the responsibility of the state government, if the state police did not have the wherewithal to provide foolproof security, it would affect the VIPs as well as the common man. “There is an urgent need to plug the gaps. The latest security breach of the prime minister is the biggest example,” he said. “It appears that actionable and credible intelligence was not available with Punjab Police. And even if it was there, there were violations somewhere that led to the breach.”

Singh’s views were supported by former Maharashtra DGP Praveen Dixit, who is among the former IPS officers who wrote to President Ram Nath Kovind, demanding a probe into the prime minister’s security breach. He said if laid down procedures were followed during VIP movements, the chances of anything going wrong were quite low. “Unless there is a goof up or a deliberate ploy, a security breach cannot happen,” said Dixit.

But what about instances when the VIPs themselves break protocol? Not many security czars have an answer to that. In 2019, Congress president Rahul Gandhi held an impromptu interaction with journalists in Amethi that led to a security scare. There were reports that a “laser’’ was pointed at him at least seven times outside the Amethi collectorate, where he filed his nomination for the Lok Sabha polls. Questions were raised whether a sniper was aiming at him. An inquiry by the SPG, which was guarding Rahul back then, found that the laser came from the mobile phone of the official photographer of the Congress. The Gandhis are now guarded by the CRPF.

“Times have changed and so have the requirements. The focus has to be on training, coordination and adequate use of technology to avoid a security nightmare. Moreover, the Central government needs to take immediate steps to stop the pilferage of explosive materials from industries,” said a CRPF official. With IED recoveries indicating a looming threat, the National Investigation Agency has asked the Union home ministry to create a digital database to keep track of the manufacture and sale of explosive materials, and fix accountability.

Till then, leaders should stop playing politics over security threats, say officers involved in VIP security. “They should cooperate with security forces and pay heed to the advice of officers on duty. Throwing caution to the wind during interactions with the public or deliberately breaking security protocols can put many lives at risk,” said a senior officer.

There was a time when presidents and prime ministers could walk the streets and interact with people. A retired officer who handled VIP security recalled a visit by president Neelam Sanjiva Reddy to Hyderabad. He was at the zoological park and was about to step into his car to go to the Raj Bhavan, when he saw a group of people. Reddy started chatting with them and the conversation went on for about 15 minutes.

Traffic was held up outside and commuters were getting agitated. Just as the police reluctantly released the traffic, Reddy finished his chat and got into his car. The convoy was soon caught in a messy traffic jam. After being stuck in the car for some time, Reddy stepped out and started walking. His cavalcade finally caught up with him and drove him to the Raj Bhavan.

Today, it will be an unimaginable scenario for VIPs and their security planners.