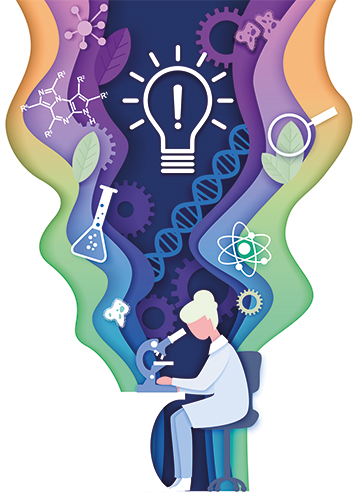 A single scene in Interstellar captured well a moment many scientists spend their entire lives pursuing. Murph runs down a corridor with her notes in hand, throws her papers into the air and shouts “EUREKA!”, startling her colleagues.

What happens next was skimmed over: A spacecraft massive enough to carry a significant fraction of Earth’s population off the dying planet is conjured out of Murph’s research idea. The painful process of developing an idea—proving it works, getting funding to scale it up and all the countless man hours of engineering required to get it off the ground—is tastefully left out of Christopher Nolan’s cinematic vision.

To scan news coverage of scientific research in India is to find a galaxy of such Eureka moments. There is no dearth of lab discoveries.

Scientists have found, as headlines breathlessly announce, new ways of extracting hydrogen (solving the energy crisis), new methods of sucking CO2 out of the air (tackling global warming), new applications of graphene (a super material poised to revolutionise every industry from semiconductors to electric batteries). But years pass and we still run cars on petrol, emit more CO2 than any existing machine can capture, and manufacture graphene by the gram.

It is not innovation that is lacking, says Ajit Rangnekar, director-general of the Research and Innovation Circle of Hyderabad (RICH) and former dean of the Indian School of Business.

“Think of it in four steps. The first is research, done purely in discovery mode,” he says. “The second is innovation—finding new use for the research. The third is entrepreneurship—having found an application, can you make a business out of it? The fourth is growing this entrepreneurial journey to something that can make a big impact. These four things cannot reside in one person.”

There is a world of difference between producing something at 5ml and 500 litre quantities, he adds. To put it another way, research scientists need to work with engineers and industry to make their ideas a reality.

It is a problem that Professor Vivek Polshettiwar knows all too well, when he tried to scale up his discovery of “black gold”. By changing both the gaps between gold nanoparticles as well as their size, his team at Tata Institute of Fundamental Research (TIFR) were able to synthesise a material that could take CO2 and convert it to green fuel methane, using solar energy, at atmospheric pressure and temperature.

His research was highlighted by the Royal Society of Chemistry’s Chemical Science journal in 2019. The promise? Artificial trees with leaves made of high-efficiency solar panels (black gold nanoparticles), that could assist in carbon capture while also producing green fuel. The problem? The conversion rate of CO2 to methane was not efficient enough. Polshettiwar says he is working on a solution by introducing another metal to the process.

Nanomaterials research suffers from a scalability problem, as a 2016 Nature article highlighted. Elements show novel and exciting properties at a nano-scale. But manufacturing them en masse, with known methods, will not necessarily replicate these.

Polshettiwar also highlights another issue he faces: Making a business out of fundamental discovery—and getting the permission and support needed to do so. “We proposed to start a non-profit company as we cannot do everything in our lab. But we didn’t get the permission,” he says.

In addition, he has had trouble getting industries to invest in the idea—they want him to demonstrate the research at a scale he cannot achieve in his lab. “Ideally, industry should come on board and say let us do it together,” he says. But there is hope still: He is in talks with Tata Steel. “I said I don’t just need funding. It should be a real collaboration. We should do something together which can be upscaled and is commercially viable. We started talking and they are going to visit my lab.”

He notes that public institutes have started to make headway towards encouraging more start-up-creation from within their ranks, pointing to IIT-Madras’s success with its Incubation Cell.

Scaling-up is an engineering problem that continues to challenge makers in India. Some industries are friendlier than others—defence, aerospace and pharmaceuticals are fields where commercialisation of ideas is supported by industries and research institutes that have the heft to scale up, Rangnekar points out.

A SOLUTION WITH MANY SUITORS 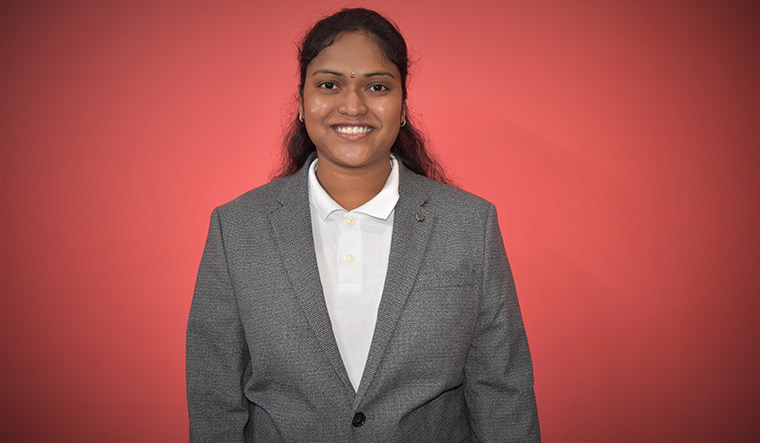 In 2018, one of the world’s thinnest materials was synthesised in Gujarat by Harini Gunda, a PhD researcher working with Kabeer Jasuja, professor of chemical engineering at IIT-Gandhinagar. Gunda’s research in 2018 explored the applications of two-dimensional metal-boride-derived nanostructures. One of them was making solid propellants up to 78 per cent more efficient.

By adding boron-based nano-additives to solid rocket fuel, the propellant can burn at lower temperatures. The rockets will need to carry less additives as well (which traditionally can take up 30 per cent of the fuel’s weight). And it costs 40 times less than the materials currently used.

ISRO, DRDO, and the Indian Army have quite understandably expressed interest. But the research may never have happened if Gunda was not able to demonstrate it. At an early stage, she needed access to solid rocket fuel to demonstrate her hypothesis. With what she had developed in her lab, she was unable to demonstrate applications for rockets. But she and her professor collaborated with Professor Chinmay Ghoroi from the same department, who had been studying on improving the flowability of a solid propellant—ammonium perchlorate. Using this, she was able to implement her idea and get her foot in the door at DRDO, which took it up eagerly to test it at the pilot scale.

While both the military and ISRO see utility in her research for their missiles and rockets, her research has diverse applications including use as electrodes for batteries, hydrogen evolution by water splitting, and as an advanced material for solid-state hydrogen storage (for which she is working in collaboration with the Sandia National Laboratory, California). Gunda now looks to establish a startup that provides material-based solutions to various technologies.

ART OF THE PIVOT

Before the pandemic, scientists at the Council of Scientific and Industrial Research Institute of Genomics and Integrative Biology (CSIR-IGIB), Delhi, were working on a technique to use the CRISPR gene editing tool to diagnose sickle cell disease, resulting in the creation of FELUDA (FnCas9 Editor Linked Uniform Detection Array).

When the first wave of the pandemic brought about an urgent need for a fast and accurate test, they found an industry partner, Tata Medical, and got to work. TATA MD-Check received regulatory approval in September as India’s first CRISPR-based Covid-19 test. It has since been used to test for Covid in tier-2 and tier-3 cities.

With the advent of mutant strains, the IGIB scientists swiftly found that their tests could be repurposed to identify the unique signature of a variant. Their prototype, RAY (Rapid variant AssaY), can test for variants faster than genomic sequencing can. With Alpha, Beta, Delta and now Omicron, the importance of catching variant infections before they can spread has been made horrifically evident.

Dr Debojyoti Chakraborty, senior scientist at CSIR-IGIB whose work with Dr Souvik Maiti led to the new test, says the technology can be adapted to diagnose any change to nucleic acids. From community surveillance to personalised healthcare and even agricultural biotechnology, his testing method could prove a multi-tool for health care workers the world over.

If there is one breakthrough that scientists across the world are chasing, it is a method to efficiently produce graphene at scale. Graphene, an allotrope of carbon, has demonstrated tantalising properties. It can replace silicon and become the next-generation semiconductor in chips, it can make batteries that hold far more power than convention lithium-ion equivalents and that can be charged faster, it can serve as a perfect material in aerospace, being both lightweight and incredibly strong.

The problem? It works best when it is a monolayer and making this is time-consuming and highly inefficient. Bulk synthesis of high-quality graphene is a huge necessity, says Dr Anup Kumar Keshri, researcher in the department of metallurgical and materials engineering at IIT-Patna.

To that end, his team has exfoliated the graphite to graphene using an age-old “plasma spray”gun. He says it is an “ultra-fast and scalable technique which can quickly exfoliate the graphite into high-quality, defect free graphene in sub-kilogram scale, without the use of any solvents, intercalants, or classically purchasable chemicals”. 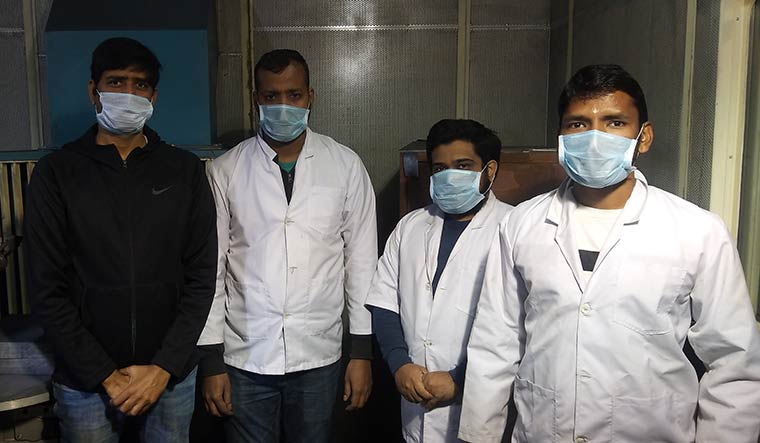 The next step? Besides working to reinforce the lab-procured graphene, Keshri’s team is in the process of further refining the process and exploring the feasibility of filing patents as well as of bringing the product from lab to market.

FROM LAB TO NETWORK

While the situation in India is improving, many scientists still look to the United States as a better model for encouraging scientific research, due to its multi-fold advantages. Polshettiwar points out that almost all institutions there have tech transfer departments, people who can help take the research, form it at viable scale, and set up.

Efforts to better connect scientists with industry and relevant partners are under way in India. The February 2020 budget included an announcement of “University Research Joint Industry Translation Clusters” in 10 locations—one of which is Hyderabad. 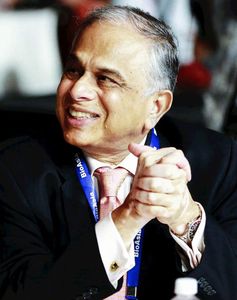 Compared with the landscape from a decade ago, things have improved, says Rangnekar. His work at RICH has made him optimistic.

“I think there has been enormous improvement,” he says. “The making of RT-PCR kits in India is a great example. Earlier, we had to import these kits. Within two-three months, Indian startups were able to make them. And they survived, even after China dropped the price of their kits dramatically. Today, India exports these kits. There was collaboration between Bengaluru, Hyderabad, Pune—when things go wrong in this country, everyone comes together and does an amazing job of collaboration.”

Networking makes all the difference for a scientist with an idea or innovation. “Where do I find those 20, 30, maybe 200 people needed to take a research problem from lab to manufacturing level,” he asks.

Initiated by the Telangana government, RICH works to link research institutions, academia and industry with venture capitalists, angel investors and incubators, with a focus on three sectors: Aerospace, food and agriculture, and life sciences.

Rangnekar gives the example of a diagnostics startup that wanted quality data from hospitals. Such startups need cleaned data, but many hospitals take records in analog form. RICH helped connect the startup with the hospitals they needed, creating a two-way flow of communication that would otherwise not exist in the wild. Doctors could now tell startup engineers the problems they faced and the solutions they needed.

It is a solution CoffeeMug.ai is also attempting to offer. The social media platform looks to connect everyone from would-be founders to data scientists and supply chain experts. You pick who you would like to meet and in what industry, and the AI-powered platform will send you an email each week to make new connections.

Change is possible, but over time. And India cannot turn into an innovation superpower overnight. India spends just 0.65 per cent of its GDP on research and development according to the latest Economic Survey. In 2016, the US spent four times that, according to World Bank data (Rangnekar points out that with scientist wages being low, labour productivity might be a better metric).

It may also be business-related: “All failed companies are the same: they failed to escape competition,”writes Peter Thiel in Zero to One. What India tries to produce for the first time, many other countries may already be producing at scale, competitively.

Only true innovation can give India a leg up. And this takes time. Thiel writes that most of a tech company’s value will come at least 10 to 15 years in the future. Rangnekar, too, feels the journey for Indian research to start having a transformational impact will take time.

Is entrepreneurial Indian science on the cusp of a revolution, albeit one that has been 15 years in the making?