UNION ENVIRONMENT MINISTER Bhupender Yadav rose to global prominence on the last day of the climate summit in Glasgow when he famously announced that consensus on the Glasgow Climate Pact remained elusive, and explained just why India cannot sign a document on a phaseout of coal. India forced the hand of the 26th session of the Conference of Parties (COP26) to make last-minute changes in the draft to accommodate this perspective. In an interview with THE WEEK, Yadav explains why the summit was a success, western media criticism notwithstanding.

Q/ The western world sees the outcome of the summit as a failure. How do you see it?

A/ The COP26 was successful in alerting the world to the climate crisis and securing commitments from all towards ‘keeping 1.5 degrees alive’ and accelerated action towards mid-century global net zero.

We are dealing with a complex problem where countries are guided by umpteen factors, from personal interests to economic constraints. My meetings with world leaders reflected immense positivity in bringing about a change and understanding the urgency of the problem.

The west has to, however, realise that it has to work in a collaborative framework where the developed countries have to walk the talk, instead of just setting the agenda and expecting the world to follow. India voiced the developing world’s argument of common but differentiated responsibilities and respective capabilities (CBDR–RC).

It is the west’s responsibility to part with the promised climate finance, even as the developing world is making its attempts at adaptation and mitigation.

On the whole, COP26 has had a positive outcome. Countries, as part of the agreement, also agreed to meet next year to discuss further carbon cuts so that the goal to limit warming to 1.5°C can be reached. 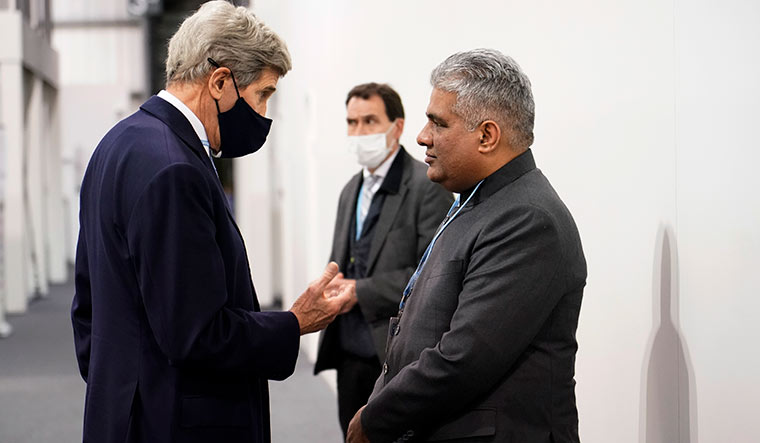 Q/ When you made the final pitch for India on November 13, what was the best outcome you were hoping for?

A/ From India’s perspective, it was the best outcome. India’s demand to change the text—“phase down” rather than “phase out” fossil fuels—was considered at the very last minute and it got support from 200 countries. The revised version was then drafted in the Glasgow Climate Pact.

Developing countries have been able to bring in a language that conveys, for the first time perhaps, that it ‘notes with deep regret’, the failure of developed countries to deliver the promised climate finance.

Q/ In financial commitments, the global north still has not committed.

A/ We have said it in no uncertain terms, that the global north has benefited from decades of unsustainable development and lifestyle. Since the environment is a shared resource, we are all paying a price for it. India believes cooperation, not confrontation, is the way ahead.

[A sum of] $100 billion [a year in climate finance] was a goal under the Convention [United Nations Framework Convention on Climate Change], and this is a goal until 2025. Prime Minister Narendra Modi, in his address, said that ‘India expects developed countries to provide climate finance of $1 trillion at the earliest’.

A structured process through a work programme has been launched for working on the new collective quantified goal (NCQG) that will complete its work by 2024. The programme will consider the needs of developing countries, call for submissions from parties and experts, undertake technical work and then give its recommendations. This is a big step forward towards forcing the hand of developed countries to realise that there has to be a NCQG by 2025, and this goal must come through a structured process under COP.

Q/ India did not sign the forest pledge, the methane pledge or the pact on sustainable agriculture.

A/ Developed nations should first make climate finance available. All the mitigation we have done so far is from our own resources. It is only now that developed nations have even agreed to define climate finance. A committee on targets is being set up now. On the other hand, we have never rejected anything from the transparency framework for finance reporting to several other proposals and our track record and intent on meeting nationally determined contributions (NDC) targets on renewable energy [is evident].

At the COP26 climate summit in Glasgow, Prime Minister Modi said India will achieve net-zero emissions by 2070. India also enhanced its goals saying: we will bring our non-fossil energy capacity to 500 GW by 2030; will bring our economy’s carbon intensity down to 45 per cent by 2030; will fulfil 50 per cent of our energy requirement through renewable energy by 2030; and will reduce 1 billion tonnes of carbon emissions from the total projected emissions by 2030.

Q/ Are we confident of meeting our 2030 targets?

A/ India has already installed 100GW of renewable energy. It is the only G20 country progressing rapidly to meet its climate goals. India has progressively continued decoupling economic growth and greenhouse gas emissions. India’s annual renewable energy addition has been exceeding that of coal-based thermal power since 2017. In the last six years, India’s installed renewable energy capacity increased by two and half times, and solar energy capacity increased by 13 times. We are well on course to achieve our targets.

Q/ By when will we begin phasedown of coal?

A/ Our renewable energy dependency is already at 40 per cent. What we are saying is that action on coal must be according to national circumstances. When we are setting out a 2070 net zero target, the commitments have to be in accordance.