Climate change summit: What will India’s position be? 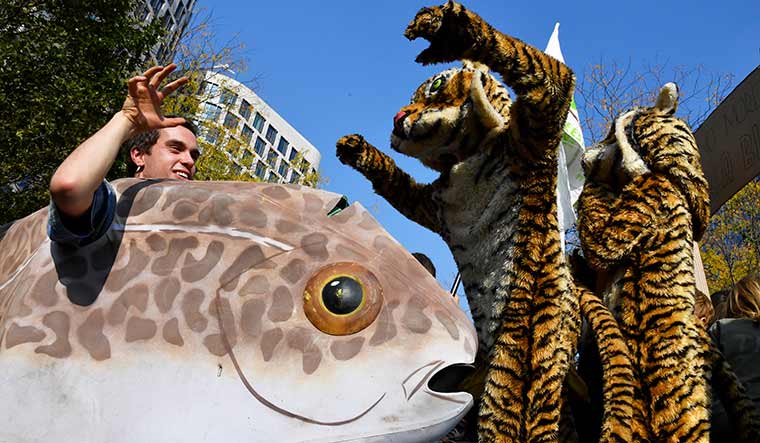 Act for earth: Activists at a climate march held in brussels on october 10.

THE WORLD’S BIGGEST climate meet is around the corner—the Conference of Parties (CoP26), under the United Nations Framework Convention on Climate Change. Glasgow, the host city, is gearing up for a fortnight (October 31-November 12) of hectic negotiations where world leaders will sit down to the tough task of forging a consensus on how to save the earth before it is too late. Alarmist studies say that perhaps it is already too late, but the effort at CoP26 will still be to bring the earth back from a point beyond which it will be impossible to change the trajectory of temperature rise.

The basic objective is the same. Rising temperatures and extreme climate events are undeniable realities across the world. Almost everyone (now that the biggest naysayer, Donald Trump, is out of the picture) agrees that as long as global temperature rise is kept within 2°C —through preferably 1.5°C—of the pre-industrialised norms, there is still hope of reversing the anthropogenic changes on climate. To do this, existing emissions need to be halved by 2030 and reach a net-zero by 2050.

The differences arise when it becomes a matter of how to share the responsibility. The biggest difference is over the universal issue of who pays the bill. The work, therefore, in Glasgow is pretty clear cut.

At the Paris meet five years ago, countries had to submit their intended nationally determined contributions (INDC), towards the goal of staying within 1.5°C. However, as the CoP26 literature points out, these INDCs are not adequate—they will still lead to a 3°C rise by 2100. Countries were asked to revise ambitions and give updated INDCs by 2020. Only around a dozen countries have done that so far. The western world, especially the US, is pushing other countries to raise their climate ambitions. John Kerry, the US presidential envoy on climate change, while visiting India in September, said he was hopeful of hearing about India’s raised ambitions one way or the other. He also said that major economies must stretch to do more at the summit.

India’s INDC was praised for its ambition and doability in 2015, subsequently, it has upped its target to generate 450GW of renewable energy by 2030. Prime Minister Narendra Modi also recently announced the goal of reaching “energy independence” by 2047. India has often said it is no point announcing newer ambitions, instead, it should meet the commitments it has made. Will India present these new targets as its revised ambition or announce some fresh plans in Glasgow? Observers feel India might have an announcement for Glasgow. In Paris, Modi had floated the idea of an alliance of solar rich countries—the International Solar Alliance was the result of that proposal.

There is talk that India might float the idea of a transnational solar grid, under a plan called One Sun, One World, One Grid. Modi is expected to attend the conference.

Smaller, island countries, which are already sinking, are vocal about the world raising climate ambition, but they want the polluters to do more, put in the finance where it is needed. Maldives President Ibrahim Mohamed Solih recently noted that the difference between 1.5°C and 2°C is a death sentence for the Maldives. In 2009, developed nations had pledged to put in $1 billion per year into climate financing by 2020; the money put on the table is far below the target ($79 million in 2019), and much of it is from private funding. “We do not recognise private funding as part of climate finance,” environment secretary R.P. Gupta recently said. India is also clear that existing funding commitments should not be passed off as climate financing.

“India should not get defensive, we are doing far more than promised,” said Chandra Bhushan, who heads International Forum for Environment, Sustainability and Technology (iForest). He noted that at the negotiating table, India is clubbed with countries like China, South Africa, Malaysia, Saudi Arabia and Brazil. “We are an outlier in this group—our developmental needs are more in tune with the lower end of the world,” said Bhushan. Even though the words “historic responsibility” were kept out of the Paris document (this would mean that the developed nations, which began polluting at least a hundred years before others, have a responsibility to do more) the principle of Common but Differentiated Responsibilities and Respective Capabilities (CBDR-RC) still stands.

The focus will be on China, which accounts for 25 per cent of global emissions at present. India’s contribution is a mere six per cent. In the post-pandemic scenario, where anti-China sentiment is high, what China commits and how it negotiates will make news. Will the world get any binding promises from China, however, is the big question.

In the last 25 years of climate negotiations, a lot has changed. Today, climate change mitigation is looked upon as a business and economic opportunity, and the private sector is heavily involved. The business of mitigation, therefore, will take up a major chunk of negotiations. The Paris rule-book has to be finalised at this meet. Observers are looking at the outcome of Article 6 of the rule-book, which covers international voluntary cooperation, through which outcomes of mitigation can be traded with another party, just as builders trade development rights. “As industry and technology take over the climate debate, topics like oceans and conservation are taking a back seat. I hope there will be some conversation on these topics, too,” says environmental planner Mrinal Mathur.

One of the aims of the conference is to protect communities and ecosystems, so perhaps, conservation will find a toehold in the discussions, which will otherwise be dominated by mitigation markets, climate financing and ambition and of course, the buzzword, net-zero.