Bengaluru is going all out to thwart bikers from racing, performing wheelies on roads 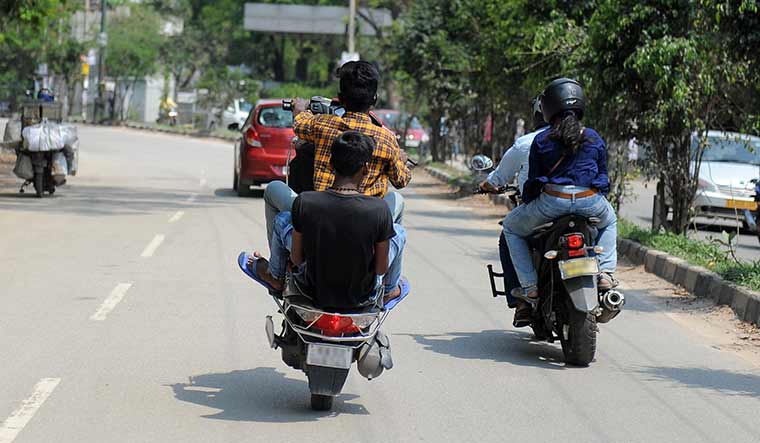 In 2016, Shiny Kiran, 18, a pre-university student, was headed to a pub with her friend, Keertan Richie, 18, a student of fashion technology. Shiny fell off the bike when Richie performed a wheelie to show off. A minivan which was right behind them ran over Shiny, killing her. Richie, who was driving a friend’s bike and had no driving licence, fled. He was later charged with culpable homicide by the Indiranagar Police.

Despite such incidents little has changed for adrenalin junkies in Bengaluru, who fancy drag racing and perform bike stunts on public roads, risking their life and endangering the lives of others.

With the number of vehicles in Bengaluru touching 83.5 lakh (57 lakh two wheelers) traffic violations are becoming a menace. The city reported 2.16 crore traffic violations in the last three years including overspeeding and racing. The Bangalore Police are cracking down on stunts and racing on public roads. Alarmingly, most errant riders are underage. Over the last three years, the Bengaluru Police has registered 73 cases of free-wheeling. Often, the police need evidence (like a video-clip) to book offenders. Many were tracked after the police found video footages of stunts posted on social media.

“The passers-by post these videos and we track down the offenders. We also break into their group,” said B.R. Ravikanthe Gowda, joint commissioner of police (traffic), Bengaluru.

He said special squads conduct drives and register cases not only against errant riders, but also against parents of underage riders, and vehicle owners. “We counsel them at a social welfare centre,” said Gowda. “The traffic violators are taken to the Traffic Training and Road Safety Institute, Thanisandra, for a two-hour mandatory training session, where they are taught riding etiquette and safety rules. A virtual simulator is used to train riders in risk prediction ability. The idea is to make them responsible road users.”

The NICE Road, the Outer Ring Road, Hosur Road flyover, Ballari Road, Tumkur Road flyover and Mysore Road are some the favourite haunts of adrenalin junkies. While most offenders are let off with a small penalty of Rs2,000 to Rs5,000, police have brought in stringent measures to dissuade youngsters from repeating the offence.

“We suspend their driving licenses. They are also made to provide a bond, from Rs2 lakh to Rs5 lakh, under CrPC Section 107. If they default, they will be imprisoned and will forfeit the bond amount. We are also booking garage owners and mechanics who are illegally modifying bikes,” said Gowda.

In some cases, citizens take it upon themselves to “punish” errant riders. A few years ago, two youngsters performing bike stunts on the Bengaluru-Tumkur National Highway were thrashed by women and handed over to the Nelamangala police station.

Said Gowda, “Drag race is not allowed on public roads anywhere in the world. It is permitted only on special racing tracks. But, young people are taking it casually and ending up getting killed or endangering lives of others.”

Said Anil Kumar, a former professional racer, CEO and founding mentor of Bengaluru-based Apex Racing Academy, “Racing enthusiasts are taking to public roads as they lack information…. Today, there are academies for every sport, be it badminton or cricket. But very few people know that there is a racing academy, where you can enrol and train to be a professional racer. Many young people are egotistic; they feel they are already good racers and need no training. Once they are trained, the athletes [riders and racers] don’t indulge in irresponsible behaviour on roads as they distinguish between a professional track and public road.”

Kumar said his academy gets two to three emails every day from racing enthusiasts. “They say they are the fastest in their neighbourhood and want an opportunity to take part in racing events,” said Kumar.

He and his staff hand over visiting cards on spotting young people racing on public roads or doing stunts at traffic signals. “Parents should be watchful. If children are interested in riding and racing, they should be enrolled in an academy. If parents don’t allow their children to get trained, they will do it without the knowledge of parents, and end up riding dangerously on public roads, which can prove costly. Many children tell their parents they are going on a weekend trip and come to the racing academy to get trained as they fear they will not get consent,” said Kumar.

He said his academy has made it mandatory for aspirants to mention their emergency contact number at the time of registration. “Then our back end team will call up in the number to verify if it is genuine,” Kumar said. They will also speak to the parent or guardian to inform them about their ward joining the training and the risk involved. Often, we find that people were unaware that their son, daughter or husband was at the racing track.”