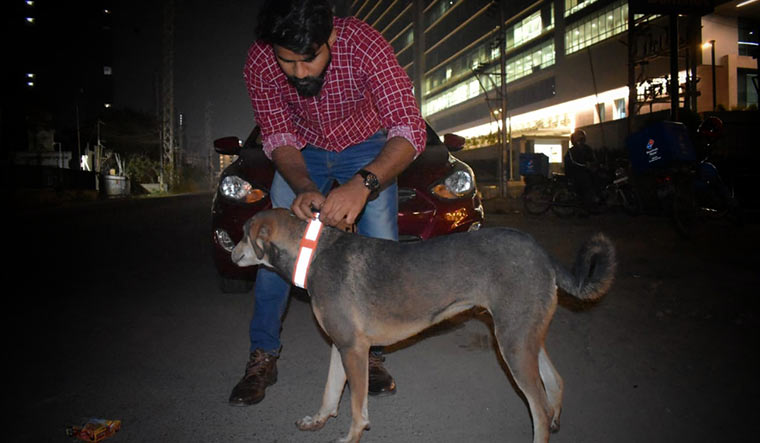 If you are on a two-wheeler, an encounter with a stray dog will rarely end well. The encounter can kill you and the dog. Or, you alone. Or, leave you bedridden for life. The best outcome you can hope for is to escape with injuries. Road injuries. The kind that takes time to heal. And, most such encounters happen at night.

Collar Up, an animal welfare NGO from Hyderabad, has demonstrated that the number of such accidents can be brought down with reflective collars. A few months back, Collar Up started putting reflective collars on stray dogs that live along the highways and busy roads of both Telangana and Andhra Pradesh. The logic is simple: The dog becomes instantly visible when it is within the reach of the vehicle’s headlight, and the driver becomes alert.

Collar Up’s efforts are showing results. For instance, volunteers from Madanapalle in Andhra Pradesh’s Chittoor district collared around 80 dogs along the local highway. This significantly reduced the number of accidents in the area. Volunteers said that at least one or two dogs used to die every day in accidents in the area. Now, the number is zero on most days. In the IT corridor of Hyderabad, accidents involving dogs fell after Collar Up’s initiative.

This is one of the many success stories of the organisation. Today, it has collared more than 4,000 dogs across nine states. “We were into a lot of animal welfare activities earlier, but collaring was not one among them,” said Chaitanya Gundluri, founder of Collar Up. “We observed that humans and animals were losing lives because of road accidents involving strays. We wanted a simple solution that would benefit both humans and strays. At that point, this idea of collaring came up.” 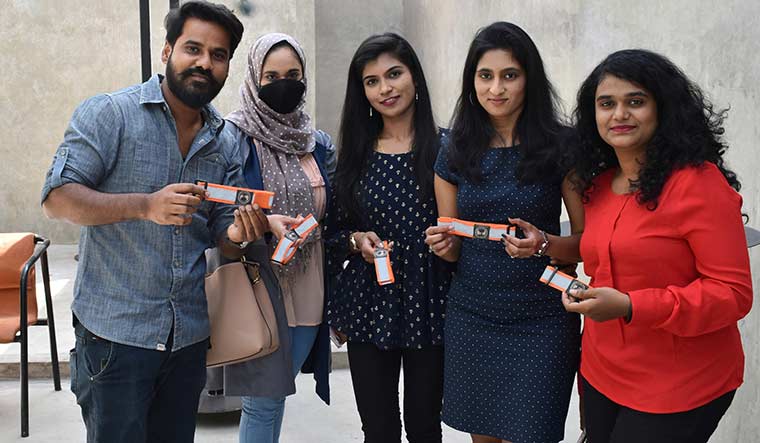 Collar Up volunteers with the reflective collars.

The members then explored different options to implement their idea. “We observed that the normal China-made collars go well with pets, but not stray dogs,” said Chaitanya. “The material is cheap, but it is heavy. It can occasionally be removed if it is a pet, but a stray has to carry it for a lifetime.”

Chaitanya and his team then settled on a nylon strip with a 3m-wide reflective tape which is water-proof and fungus-proof.

The organisation, which now has 280 members, approached rural women entrepreneurs to manufacture the collar. “We provided them with sewing machines and material, this way they also made some money,” said Chaitanya. The volunteers focus on collaring stray dogs in busy areas. “Around 60 per cent of stray dogs are friendly and 40 per cent are aggressive,” said Chaithanya. “We approach them with some treats. We win their trust by patting and cuddling them. Once they get friendly, we wrap the collar and pin it. The entire process may take about 20 minutes.”

The initiative has managed to attract attention and Collar Up has been receiving feelers from those who want to be part of its mission. Their latest project is to collar strays in Ladakh.

There is a flip side, too, to these efforts. The flashy and fancy collars have attracted unwelcome attention. Many collars put on strays were stolen. A few pet owners were found to be using these stolen collars for their dogs. Since this is proving to be a big challenge, members of Collar Up have approached a few celebrities to create awareness about their mission and ensure that collars remain on the streets to save lives.