Drowsy driving is a major cause of accidents in India 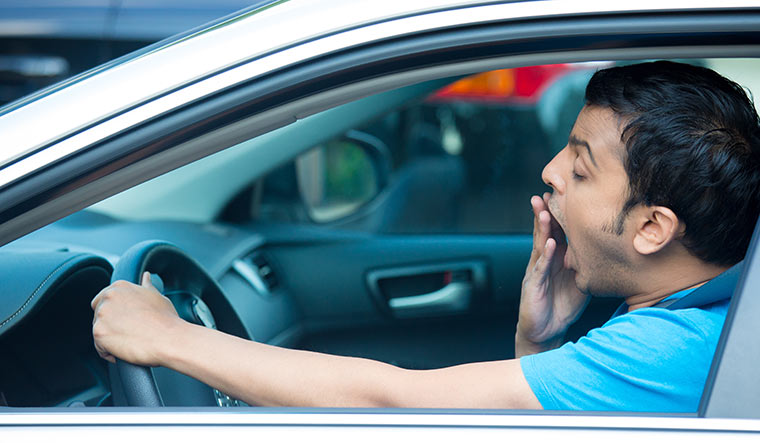 According to a recent study, around 40 per cent of fatal road accidents in the country, in the last five years, were because of drowsy driving, or, simply put, drivers dozing off at the wheel. Lack of sleep reduces a driver’s spontaneity and reaction time. Most drivers wake up only on hearing the sound of the collision.

“Many fatal accidents happen when truck and bus drivers doze off during late night or early morning hours. There are also instances of car drivers dozing off. But the impact is much more when it is a (commercial) vehicle. Taking sufficient rest in between the drive is the only solution,” said Samson Mathew, director of Thiruvananthapuram-based National Transportation Planning and Research Centre.

“Truck and bus drivers should mandatorily take rest for a few minutes after every 60-70km, or there should be a substitute driver in all long-distance buses and trucks,” he said. “This is all the more necessary during overnight trips as dozing accidents are usually reported between 11pm and 4am. The states have to enforce these rules. The authorities should check the physical condition of drivers who drive after midnight. We have suggested to the government that it should set up air-conditioned dormitories on national highways, which drivers can use for a nominal charge when they are tired.”

Said Dr Ajay Ravi, a pulmonologist, “The main causes of drowsy driving are sleep deprivation and continuous long drives. But the most important medical reason that can lead to drowsy driving is Obstructive Sleep Apnoea (OSA), a common but under-diagnosed condition, in which breathing stops involuntarily for a few seconds during sleep.”

He said people who sleep excessively during daytime tend to doze off while driving. “People with unrefreshing sleep, excessive snoring, poor memory, fatigue and irritability are also at the risk of drowsy driving,” said Ravi.

Awareness about sleep hygiene is the key, said the doctor. “Weight reduction and abstinence from alcohol help in controlling drowsy driving. Authorities should regularly check the condition of drivers, and alert those who are sleep deprived,” he said.

As Nrusingha Charan Sahu, former transport minister of Odisha, said, “The person sitting next to the driver has an important role to play. He or she should always be alert and check if the driver is tired.”

Apparently, more than 90 per cent of Indians are sleep-deprived. “But there is no scientific process through which we can check whether a driver on the road is sleep-deprived,” said L.S.M. Ramasree, joint transport commissioner, Andhra Pradesh. “A few years ago, we offered free tea to all truck and bus drivers on the national highway, so that they don’t fall asleep,” she said. “We also gave them water to wash their faces. Such a gesture on our part was appreciated by the drivers. Now we have stopped it. We will continue with it as and when the government decides.”

She said accidents because of drowsy driving were on the decline in Andhra Pradesh. “Most road accidents happen during peak hours, and the victims are mostly two-wheeler riders,” said Ramasree.

* Avoid driving between 11pm and 4am, except in an emergency.

* Take a few minutes break after every 3-4 hours and wash your face.

* Make sure you have slept continuously for at least 5-6 hours on the eve of a long drive.

* In case you are yawning uncontrollably, stop the car immediately and take rest.

* Put the music in low volume to remain alert.