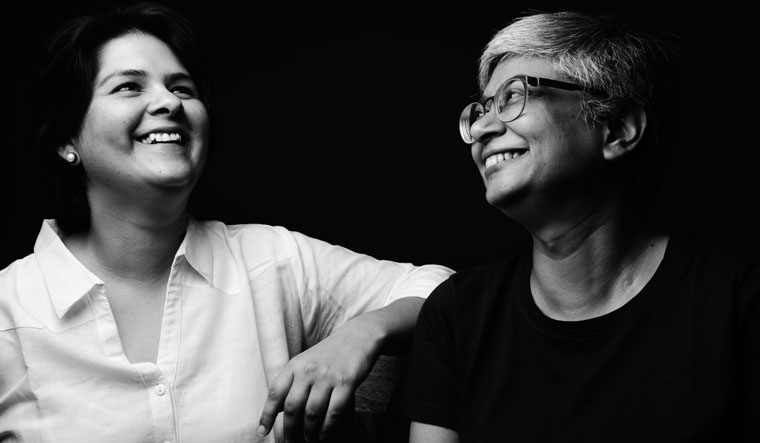 Just cause: Khanna and Arora say the decision to go to court was an affirmation of their faith that they are equal Indian citizens | Yeashu Yuvraj

Dr Kavita Arora and Ankita Khanna have been a couple since 2012. Arora, a 47-year-old psychiatrist, and Khanna, a 36-year-old therapist, had met in a professional capacity in 2006. The Delhi-based mental health professionals were friends for six years before they entered into a relationship.

Arora and Khanna are also colleagues at Children First, a child and adolescent mental health facility, which Arora established in 2009 along with two other experts. The Covid-19 pandemic jolted the duo into the realisation that life is unpredictable, and brought home the need to protect each other’s financial and emotional security. This prompted them to approach the office of the local sub divisional magistrate to get their union registered under the Special Marriage Act, 1954, in September. But they were told that the marriage could not be solemnised as the law does not cover same-sex couples.

Vaibhav Jain, 34, and Parag Mehta, 44, have been living in New York as a couple and are doing extremely well for themselves. Jain is a public health consultant, while Mehta is the executive director and senior vice president of the Mastercard Centre for Inclusive Growth. They had met in Washington in 2012, fell in love and eventually decided to get married. Following a court registration of their marriage, they had a traditional Jain wedding in Killeen, Texas, in March 2019, with the full support of their families. It was followed by a reception in New Delhi.

Again, it was the pandemic that brought home to Jain and Mehta the need to be recognised as a couple by Indian law. Jain, an Indian citizen, and Mehta, an overseas citizen of India, had in the past made regular visits to India without any problems. However, travel restrictions kicked in because of the pandemic, when all foreigners, including OCI card holders, were restricted from entering the country. Some relaxations were made for OCIs whose spouse was an Indian national. Jain and Mehta approached the Indian consulate in New York to obtain a certificate of marriage under the Foreign Marriage Act, 1969, but their application was rejected as the Act does not recognise same-sex unions.

They approached the Delhi High Court in October, seeking legal sanction for same sex marriages, and in the process striving for what is seen as the logical culmination of the Supreme Court having decriminalised homosexuality in 2017. Arora and Khanna also filed a similar petition the same month. The couples argue that the laws governing marriage are unconstitutional as they discriminate against same-sex couples by not respecting their right to make their own choices. The court, in its hearing on January 8, asked the Centre and the Delhi government to explain their stand on the issue. The case will be heard next on February 25.

“We felt that this could be a possible route for us as well as many other couples facing the same predicament. Therefore, we have taken this step, seeing ourselves as ordinary yet empowered citizens. This is for us an affirmation of the faith that we are equal Indian citizens. Different in that we are both women, but not less than any other couple. Equal, free to choose our partner in love and marriage, and live with dignity,” Arora and Khanna wrote in an email response.

“Petitioning the court is not a decision we took lightly,” said Mehta. “It comes with many risks. I am sure there are same-sex couples across India who would join this call for equality. But they fear for their jobs. They worry that their families will disown them. They have genuine concerns for their safety. Vaibhav and I realised that, whatever the risks, we are in a position to face them.”

The two couples have had their share of trials and tribulations which extend from coming to terms with their sexuality to getting their families on board and taking the bold decision to be open about their commitment to each other.

Arora grew up in Alaknanda, Delhi, in a Punjabi nuclear family with working parents. She chose to become a psychiatrist after completing her MBBS. As she was pursuing her MD, her parents made her meet several prospective grooms, but she felt no emotional connect with any of them, and the reason for this became clear to her later as she came to terms with her sexuality. Khanna, who hails from Dehradun, and completed her master’s degree in psychology from Delhi University, was married in 2008. She separated from her husband in 2012 after she realised that she was in love with Arora.

Jain, who hails from Delhi, moved to the United States in 2011 to do his master’s in public health. He met Mehta at a pride parade in Washington in 2012. Jain reached out to Mehta on Facebook, after which they went out for dinner which became a six-hour-long conversation, and they bonded over their shared Jain faith and interest in Bollywood films.

The decision to move court was inspired by the couples’ own experiences. “After eight years of marriage, any couple would likely have joint bank accounts, loans or bought a house together. For us, even getting a proof of residence for Ankita has been a struggle,” said Arora. From significant issues such as the right to take the ‘end-of-life’ decision for each other to everyday things like requesting family memberships to the local swimming pool or claiming couple discounts have proved to be major hurdles for them.

Jain spoke about the hurt he felt about his relationship with Mehta losing its legal sanctity in his home country. “As an Indian citizen, it hurts me that my husband is my husband except when I bring him home,” he said.

The Supreme Court’s decision in 2017 in the Navtej Singh Johar case, which decriminalised homosexuality, had come as a morale booster for the two couples, instilling in them the confidence that they could live without shame or fear. They expect the judiciary to now go the whole distance and ensure that while they have the right to be left alone, as underlined by the 2017 judgment, they want to be recognised as equals and be given the same legal protection that is provided to heterosexual couples.

Asked if they felt India was ready for same-sex marriage, the two couples expressed optimism. Arora and Khanna believe there is a ripple effect in the manner in which conversations are going on, and change is underway. “India loves marriage. We are a society rich with love stories and weddings. From our mythology to our films, the marital relationship is fundamental to our culture. So, why would we want to exclude an entire population from something we as a society consider central to our lives?” said Mehta.