Cooking wonders: Nihal Raj aka Kicha at his cooking lab

What was the greatest thing you did as a six-year-old? To steal a popsicle from the refrigerator without getting caught? Ask the same question to Nihal Raj aka Little Chef Kicha, and he would say that he took his entire family on a trip to the United States—to one of the Hilton hotels, to Universal Studios, and the Ellen DeGeneres Show. All this happened because he had tried his hand at making popsicles—instead of stealing them—at four, and shared that experience with the world.

Kicha, who hails from Kochi, rose to fame in 2016, when he was six, after Facebook brought the rights to one of his cooking videos on YouTube—How to make Mickey Mouse mango ice cream—for $2,000. Subsequently, he was invited to the Ellen Show as a guest in the same year. Dressed in a wee apron and chef’s cap, Kicha showed Ellen how to cook puttu, a south Indian dish made of steamed rice flour and grated coconut. And, in the last four years, the child prodigy has established himself as one of the top kid influencers—who has the power to influence the purchasing decisions of his peers—in the country.

Kicha used to watch a lot of YouTube toy unboxing videos at an early age, says his father Rajagopal Krishnan who is the CEO of an online tutor platform, Stream Vertical. Kicha was inspired to start a channel after seeing American YouTuber Evan Lee’s (who is 14 now) channel EvanTubeHd, which has 6.6 million subscribers. Even the name of his cooking channel, KichaTubeHd, is inspired by it. “Kicha had a dream of going to the US to meet Evan,” says Rajagopal. “During a family trip to Thailand, he asked me: ‘Papa, make money, let’s go to the US’. He thought it would be simple to meet Evan just by going to the States. So, I told him, ‘Kicha it is not possible as it would require at least 015 lakh, and I do not have money.’ Before returning from Thailand, he said, ‘Our next trip will be to the US. I will take you all there.’”

Interestingly, within the next three weeks, Kicha, and the entire family, got an invitation to the Ellen Show. His dream of going to the US came true, but instead of meeting Evan, he ended up meeting Ellen. Followed by the Ellen Show, Kicha was invited to Little Big Shots US, and several other TV and radio shows. Soon, multinational brands like Nestle began seeing him as a potential influencer. 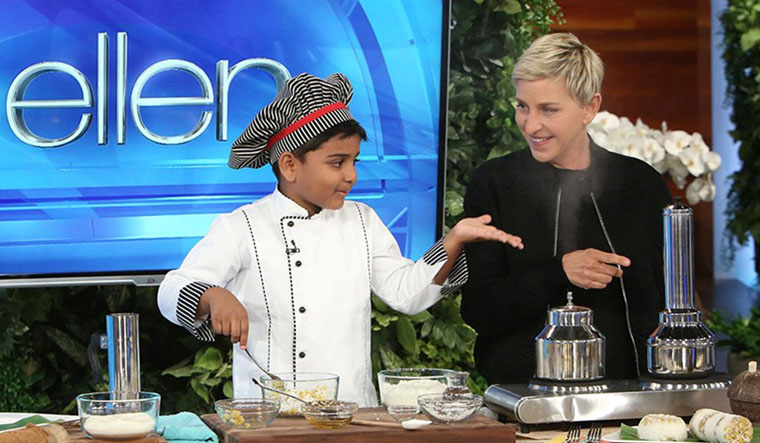 Influencer marketing is a fast-growing segment worldwide as it is creating huge returns for businesses. Brands are banking on influencers in the digital space because they can drive trends and encourage their followers to buy products they endorse. According to a study by professional services firm PwC and kid-tech Super Awesome, the global kids’ digital advertising market will be worth $1.7 billion by 2021. The highest-paid YouTuber in 2019 was Ryan Kaji, 8, from Texas. According to Forbes, he made $26 million from YouTube alone last year. His main channel, Ryan’s World, has 27.1 million subscribers and more than 42 billion views. And it is estimated that he earns at least $62,650 for each video. Compared with the west, the kid influencer domain in India is still nascent. And, most of the top influencer kids have urban roots. The 2019 Indian Kids Digital Insights by TotallyAwesome, a kid-safe advertising platform, says that influencer kids from India can charge from Rs1 lakh to Rs2 lakh on an average for pushing brands. The study also says that “93 per cent of kids find out about new things coming out and search for their favourite brands from online sources, and 79 per cent of kids surveyed in the study ask parents to buy something because a kid influencer had it or used it”.

Noida-based Kyra Kanojia—who mainly does toy reviews and unboxing—and her parents, Manish and Sinchitha Sur, are conscious about the impact the videos can have on other kids. That is why they cut back on toy reviews during the pandemic. “Almost for eight months, kids have been confined to home. And, if we do toy reviews, kids following her channel might feel jealous, or they might push and pester their parents to get those toys. It is not a positive thing to do.” says Sur.

Kyra, now 9, started making videos at the age of 5. “She used to watch a YouTube channel where two Filipino girls unboxed toys,” says Manish, who is a creative director for a tech company. “Those toys were inexpensive, DIY kind of toys. So, one day she asked me whether she can do a video like this. So, I went to the big toy market in Delhi and managed to get some toys. We shot the video and I showed it to some of my friends. They all liked it.” Thus started Kyra’s journey. She has more than 18,000 subscribers on YouTube now, and many of her videos have more than a million views. She has good traction on her website, Kyrascope.com, too. 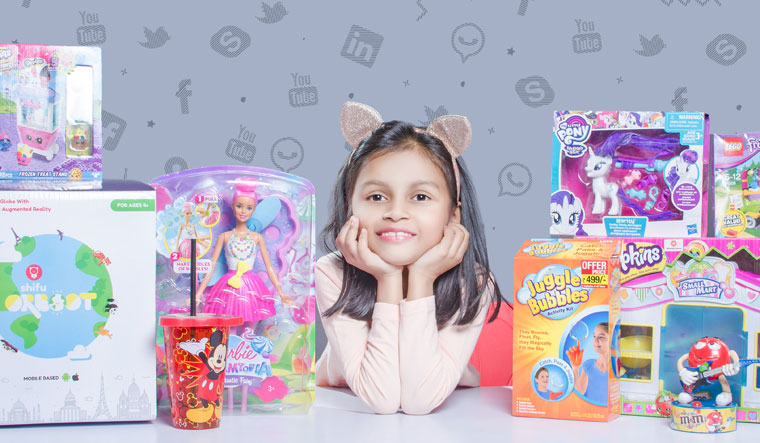 “Initially, I used to buy toys for her,” says Manish. “At the end of the first year itself, a lot of brands and PR agencies started approaching us.” She also started receiving toys from different parts of the world as gifts; when asked what her favourite toy was, Kyra had said “Lego”. She has already tied up with several brands, including Hasbro and WinMagic Toys, and channels like Cartoon Network and Pogo.

When it comes to follower base, 11-year-old Anantya Anand, aka My Miss Anand, holds the top spot among kid influencers from India. Coming from a family of YouTubers—nine members from her family are content creators on YouTube and other social media platforms—she has a massive following of 9.39 million on YouTube and 2.3 million on Instagram. According to Social Blade, a website that tracks social media analytics, her yearly revenues from YouTube is estimated between $3,30,100 (Rs2.4 crore) and $5.3M (Rs39 crore). Anantya’s mother Nisha Topwal is also a Youtuber. Her food blog, CookWithNisha, has more than 85.3K followers on Instagram. “Becoming a Youtuber came naturally to Anantya as she loves being in front of the camera,” says Nisha.

Anantya debuted on YouTube when she was four, in her aunt’s vlog. “When I started, my aunt was doing beauty blogs. So, I did some fashion videos with her,” she says. “Then for some time, I did not make any videos. But when I started making videos again, my mumma saw that I can act well. So, we started making sketches.” Anantya’s videos are mainly comedy sketches, with a moral lesson, and she is associated with major brands like Disney, Nickelodeon, Byju’s, and Cadbury.

Generation Alpha (born after 2010) is the first generational group to be immersed in digital technology, practically from birth. There are clear indications that children are shunning TV for internet-based alternatives. And, of course, it is opening new avenues. Counselling psychologist Dr Nisha Khanna says early exposure to the internet is both a boon and bane for children. “The internet has surely intellectually stimulated children, but has made people physically lethargic,” she says. “The Alpha generation is more prone to anxiety and depression as they constantly tend to compare themselves with others and try to seek validation from others.” She adds that those who gain a celebrity or influencer status have the risk of facing some self-esteem issues, later in life. “This happens because influencer kids are used to praises and positive comments, and they would tend to seek validation from others even as a grown-up,” she says. The parents of the child influencers, however, testify that they exert strict parental control on social media accounts of their children—the children are not allowed to read the comments, whether it is positive or negative, or spend too much time on the web. Also, they do not want to pressurise their children to grow the subscriber base. “We do not want our subscribers to grow to millions in a week, or a month, or a year,” says Rajagopal. “Now the channel is under parental guideship. Once Kicha is 13—because it is the legal year to be a social media influencer—if he is interested, let him take it forward. Until then, we will not make a push on social media.” 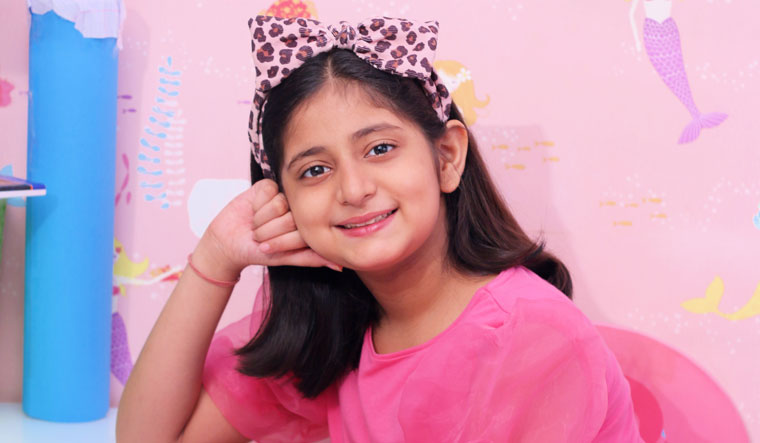 The influencer kids have a great risk of facing issues of data privacy and online trolling, too. This is especially true in countries such as India, where rules governing data privacy and cybersecurity are largely ineffective. “India still lacks strong child data protection rules like COPPA (Children’s Online Privacy Protection Act) of the US or GDPR-K (General Data Protection Regulation-Kids) of Europe,” says Neha Nambiar, regional marketing communications lead, TotallyAwesome. Her company aims at providing a platform that is compliant with child data protection rules through which kids’ brands can engage with the children. TotallyAwesome started its India operations in February 2019. But they had to halt it within a year since there is no bounding law concerning child data protection here. “We are living in a country where even a four-year-old would receive abusive threats and cuss words,” says Rajagopal. “I am talking about the abuses that Kicha once received. It was so abusive. I started deleting all the bad messages that came to the page before my boy wakes up. I do not understand why people have to behave this way. A kid is cooking; if you want to appreciate, (do so). If you do not want to appreciate it, tell it differently. But it should not be abusive.”

Nowadays, kids are interacting with all kinds of brands, and not just with those specifically meant for their age group. And, there is growing concern that they are being exposed to PII (personally identifiable information) trackers that are aimed to collect data points (parameters to identify online behaviour) on adults. It is estimated that adult ad tech can capture up to 72 million data points on a child before the age of 13. For a kid influencer, the exposure is much higher than this, which raises serious privacy issues.

In February 2019, YouTube disabled the comment section on children’s videos after the discovery of a paedophile ring sharing comments, leaving timestamps and details noting when children were in suggestive positions while dancing or doing sketches. Though it had decreased the engagement and traffic on the videos, parents of influencer kids say it promoted child safety. There are privacy and safety concerns on other social media platforms, too.

Generation Alpha is arguably the most culturally diverse, and digitally-connected generation ever. They are opinionated, socially conscious, and are the true digital natives. Also, their choices are largely shaped by their peers in the digital sphere. All this means that more brands will chase more influencer kids, especially in a huge digital market like India, in the years to come. So, the thrust should be on making the internet a safe place for kids in the first place.