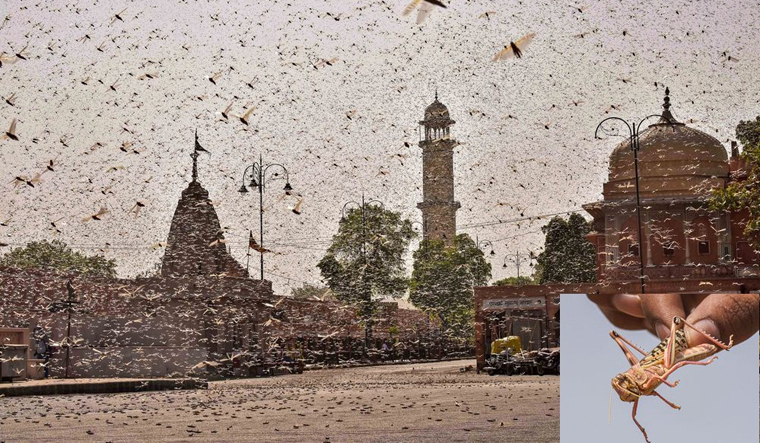 Pest, out of control A locust swarm in Jaipur on May 25 | Photos PTI

Remember the rains in March, which cleaned the air much before the lockdown did and kept summer at bay from the northern plains for weeks? Humans were not the only ones who enjoyed it. Far away in the sands of the Thar, for a species of locust called Schistocerca gregaria, the rains were a trigger to go into a frenzy of breeding.

By April, the desert sands were abuzz with the patter of millions of little feet. As the young hoppers rubbed their legs against each other, their bodies started producing serotonin—the same hormone, which in humans is known as the happiness or feel good hormone. The hormone converts solitary insects into gregarious ones, makes them indiscriminate feeders and strengthens their leg muscles for long distance flights in search of food. The swarms could become several kilometres long and as dense as 150 million/sqkm.

On April 11, the Locust Warning Office (LWO), a department in the agriculture ministry, saw the first incursions of these hoppers at the Indo-Pakistan border. The desert locust has three breeding areas—the Horn of Africa is its winter breeding ground (October-February); Balochistan and the Persian Gulf for spring breeding (February-July); the Thar desert in India and south west Pakistan is the summer nursery (July-October). “By February 17, we had no locust in India,” explains K.L. Gurjar, deputy director, locust division of agriculture ministry’s plant protection department, Faridabad.

“The insects, which were heading to Iran for spring breeding, saw conducive conditions in Pakistan, and stayed back to breed there. So, we have an unnaturally high population, much earlier, this year.” The other nurseries are also highly fecund. East Africa and the Arabian Plateau have had good monsoon for the past few years, thanks to an active Indian Ocean Dipole, a sea surface temperature oscillation phenomenon, leading to a population explosion of the desert locust. According to the United Nations Food and Agriculture Organization (FAO), they are breeding 400 times faster than usual. Africa is reeling under locust-induced famine since last year; Iran is staring at its worst infestation in 70 years. Pakistan has already declared a national emergency as locusts threaten its food security for the second consecutive year, bringing the worst plague in 27 years.

In India, the May swarms ate their way through the Rajasthan scrub into the alluvial fields of western Uttar Pradesh, Madhya Pradesh and reached the orange orchards of Nagpur, aided by the winds caused by Cyclone Amphan. The FAO warns of several successive waves till July (from across the border) into Rajasthan with eastern surges up to Bihar and Odisha. It is even possible that swarms from Africa may come here in July, aided by the monsoon winds, says Gurjar. While Rajasthan and Gujarat are used to annual locust infestations—last year alone they destroyed 3.5 million hectares of cash crop—elsewhere, farmers are flabbergasted, using drums and shouts to scare away the insects.

The early incursions have not caused much damage, since the rabi harvest is in the granary and the kharif yet to be sown, though vegetable crops, especially around Jhansi, have been chomped up. However, subsequent swarms could threaten India’s food security in a year where resources are already strained by Covid-19.

India has reacted quickly, rolling out its established contingency plan. India and Pakistan have an established process for locust warning and management, with six official meetings between June and November, during which time they even run a wireless communication between Jodhpur and Karachi.

This time, with the spring breeding grounds in Sistan-Balochistan area of Iran and Pakistan threatening incursions eastwards, India offered 20,000 litres of malathion insecticide— the most effective weapon against locusts—to Iran, which gratefully accepted it. India approached Pakistan, too, but got no response to the request to advance locust management meetings, or to the offer of a malathion gift package. Pakistan, however, is partnering with China, which donated 300 tonnes of pesticide and 350 mounted sprayers. India, meanwhile, is planning drone spraying on the swarms.

The swarms in India right now are of immature hoppers, which will eventually return to the summer breeding grounds to mate. There, they will multiply in even larger numbers, and India can expect several waves of swarms from across the border. One female locust, in her 90-day life span, can lay three batches of around 400 eggs.

India has not seen locust plagues in a long time—the last plague cycle was in 1959-1962. The last upsurge (unnaturally big swarm) was in 2011. “We have therefore become complacent, and have not invested in research on locust control,” says Jyoti Sharma, head, Centre for Environment Science and Engineering, Shiv Nadar University. “Chemical pesticides come with environment damage. During the British Raj, there were better efforts at control. They encouraged natural predation by birds; today, bird populations are dwindling. We could have done so much genetic research, found a serotonin inhibiting gene.”

India is doing some research with the fungus Metarhizium acridum, as a biopesticide. “However, it is only effective at the hopper stage,” says Gurjar. “And it takes between a week to 15 days to kill the insects, by which time they can devastate huge swathes.” Malathion kills in half an hour, and is already a commonly used agriculture pesticide. It remains for a shorter time in the environment in comparison with other organophosphates.

However, with climate change triggering more insect attacks, there is a greater need to look for bio control. “The locust is a highly unpredictable insect. Let us not take it for granted,” says Sharma.