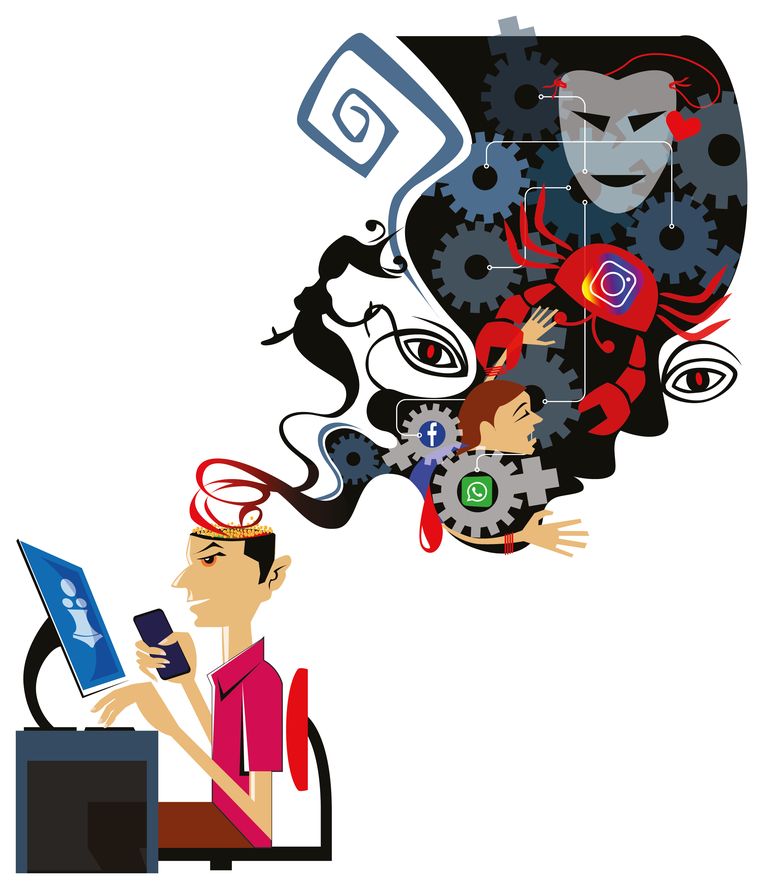 Richa Sharma says it was just a “thinking” picture of her sitting, lost in thought, with her finger on her lips. But the 17-year-old from Bengaluru could not have imagined that the stranger she briefly interacted with on Instagram would morph it into the horror show it later became.

In early April, Richa got a message on her profile from a Delhi boy her age. She did not suspect anything fishy; he had a respectable-looking profile, she says. Richa has been running a YouTube channel on teenage dilemmas and she assumed the boy was a follower. Moving on from small talk, the boy urged Richa to send him a nude picture. Taken aback, Richa said no and ignored the alarming request. Fed up with her resistance, the boy, says Richa, pulled out the “thinking” picture from her profile and foisted her face on a nude body. He then sent her the photo. “The last message I sent him was me saying he could do whatever he wanted,” she says. “I never sent him anything from my side. Why should I have been scared?”

The next day, on a story she posted on her profile, the same boy trolled her with obscene Hindi slang. Richa ignored it. Then, one Sunday, Richa saw the ‘Bois Locker Room’ incident trending on social media. A group of boys from upscale Delhi schools had allegedly shared, on Instagram, photos of underage girls with deeply misogynistic remarks, some even vindicating sexual assault. “I shared the news as a way to create awareness,” says Richa, whose father is a manager in a multinational company. “The next day, when the list of members of the locker room came out, I saw the same boy’s name [come up] as an admin. That is when I panicked.”

Richa, an only child, does not want to take legal action or even tell her parents. They do not know about her YouTube channel. “I cannot talk about these things with my parents,” she says. “They are not very supportive. They will just ask me to wear full clothes or sit at home quietly.”

So, she got more information on the boy from an ethical hacker, but has not decided what to do with it. “At least in Delhi, this is happening in private chat rooms,” she says. “In my (Bengaluru) school, every day I hear someone come and tell me how they were inappropriately touched by boys outside, during the lunch break. And there are cops stationed around our girls’ school.” 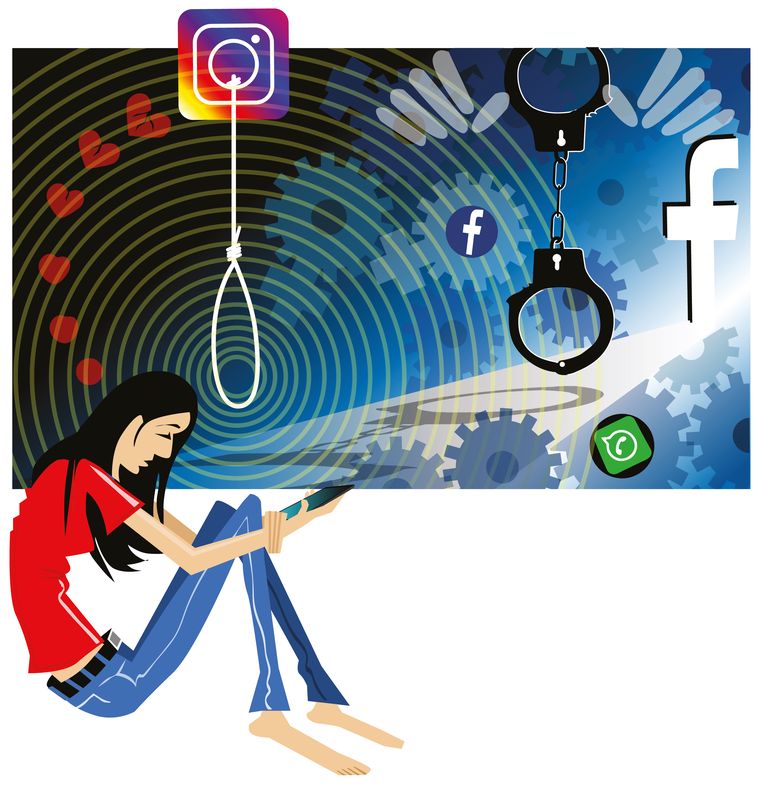 Most people have been subjected to snatches of crude, vulgar, extreme talk, especially about one’s sexual conquests, in closed-door spaces of schools, colleges, offices and so on. The Bois Locker Room case, which erupted on May 5, highlights how this culture of boasting plays out in the most insidious ways when it is transposed to the unfettered world of social media. A private chat group on Instagram, formed by a group of bored, well-off schoolboys in Delhi, has brought to the fore a viscous web of cyber criminality among minors who struggle to control their impulses for quick thrills and a sense of power. Fake profiles, stalking, bullying, blackmailing, morphing images, sexting, dating aggression, revenge porn, gang-violence, cyber-suicide—just this one case has come to represent the toxic cocktail of discontent in the private lives of modern Indian teenagers, clueless about netiquette and cybersecurity. “The Bois Locker room incident is just the tip of the iceberg,” says Pavan Duggal, a cyberlaw expert. “There are hundreds of cases of misuse available on various platforms that service providers know of, but have not yet been reported.” Pointing out the inadequacy of the current provisions of the Information Technology Act, 2000, and also those of the Indecent Representation of Women (Prohibition) Act to deal with cases of cyber-bullying, Duggal says no specific law on these issues is being contemplated. “The Indian cyberlaw was amended 12 years back,” he says. “Since then, there have been massive developments in technology, which necessitate that the law be updated to make it topical and relevant.”

In the same week the Bois Locker Room incident came to light, a 17-year-old boy jumped off the 11th floor of his apartment building in Gurugram. A girl had reportedly accused him, on social media, of molesting her two years ago. Mumbai-based cybercrime investigator Ritesh Bhatia talks about a case where four boys from a well-known international school in Mumbai ganged up against another boy—who was also their friend—to shame him in a private chat group on Instagram in April. The four boys found their friend to be a “sissy”; they did not like his “lady-like, effeminate” conduct on TikTok videos and in Instagram pictures. In the chat group, they would objectify his body parts. The boy took screenshots of their unsavoury conversations, showed them to his mother and then posted them on social media. The four boys, in turn, got cyber-bullied by a lot of people. “Do not make social media a court,” says Bhatia. “This boy, without informing anyone, put out everything on Instagram. The boys’ parents should have been contacted first. The principal suspended the four boys after receiving complaints against them. But the new fashion is to take everything online. This is not a platform to seek justice. Only when other platforms are not working should you name and shame.”

Bhatia strongly believes that the teens are only aping adults. “Aren’t we constantly trolling women journalists, vocal actresses and minority women with death and rape threats? Think about how (environmental activist) Greta Thunberg gets trolled,” he says. “What has the government done to take on these trolls? All the parents who troll others, now it is passing down to their children.”

He adds that there has to be a way to instil fear of the law in trolls. “Teenagers on Instagram follow celebrities and they see how elders comment and how no action is taken either by the platform or the government,” he says. While the sedition law has been used to arguably muzzle dissent against political leaders, there has been precious little done to bring online trolls to task. “Online trolling is not an offence under the IT Act, 2000,” says Duggal. “Also, online trolling cannot be effectively covered under the existing provisions of the Indian Penal Code, 1860. India has failed to get a single conviction concerning online trolling. This itself should be a trigger to amend its cyberlaw to not only cover online trolling, but also to make it a heinous offence.”

Says Sonali Patankar, president-founder of the nonprofit Ahaan Foundation and Responsible Netism: “With early access to hand-held devices, online bullying starts in the fifth grade itself. Our ground research has shown that these kids are extremely independent; they seem to have everything sorted and they do not like any adult interference. But they are just not aware of the legal and psychological consequences of their online behaviour. People do not know that the bully needs more help than anyone else. I can teach my child to be empathetic and careful, but I am fighting an entire lobby of my friends who are teaching their kids just to do the opposite.”

Patankar, who has worked across schools in Maharashtra to promote cyber education and online wellness among children and adults, says the lockdown has exacerbated bullying. “Let me tell you, this is happening across the board,” she says. “Minors are sharing horrifying content on social media and on WhatsApp. There is no economic, cultural, religious, gender or state divide. Boys are equally bullied. Vulnerabilities are higher with illiteracy and [among] first-generation internet learners. Gaming platforms are the worst-hit; you are threatened with death there because you just cannot play.”

When Sarah (name changed) from Delhi saw how the Bois Locker Room case exploded, she came out with her own story. A year ago, the 18-year-old from a prominent Delhi school became the target of a ‘girls’ locker room’. While one would expect the participants of such a group to direct their puerile remarks at men, this chat group was formed only to bully Sarah. While the trigger for creating this group sounds like a plot from an asinine American teen comedy involving mean girls and ex-boyfriends, the obscene dissection of her Instagram pictures and stories, apart from physical threats in clubs, drove Sarah to the therapist’s couch. “There were 15 other girls when this group started, but six of them were more active,” she says. “I actually threatened them with a case. After this, I was not in a good place mentally, so I slashed my wrists.”

Sarah, the only child of a real-estate developer in Delhi, was hospitalised after the suicide attempt. “Back then, the cops came to my house,” she says. “I even gave a written complaint. Instead, I got a lecture on how suicide was illegal. No action was taken against the admin of the girls’ locker room. Now that same girl has started a smear campaign against one of the girls who first outed these boys from the Bois Locker Room case.”

Sarah shared the screenshots of the girls’ locker room on social media only this month. “That was the only way I could find closure,” she says.