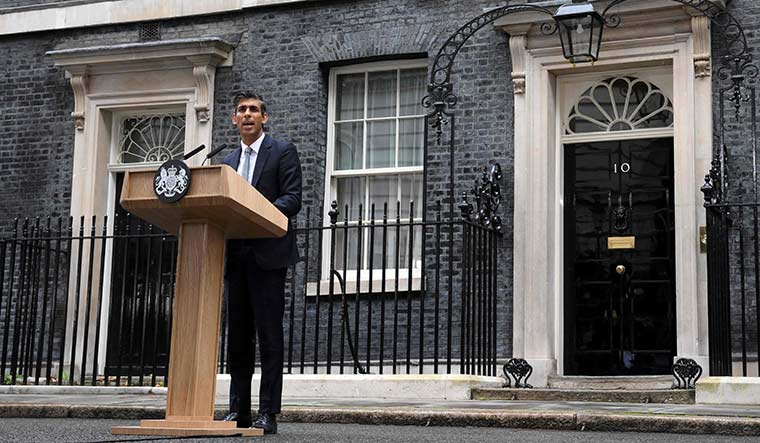 The early bird catches the worm, but the second mouse gets the cheese. Rishi Sunak lost to early bird Liz Truss in the September Tory race to become party leader and British prime minister. But in the second race to the top to replace her, Sunak became the clever mouse that got the cheese―the tempting, to-die-for trophy that British politicians covet. He became the 57th prime minister of the United Kingdom, with much broader party and public support than his predecessor. “Grown-ups have returned to the table,” said Tory MP Alicia Kearns.

Sunak is sharp, but he also got lucky. Truss created history, of the wrong kind. Scandalously imploding in 44 days to crash as Britain’s shortest serving prime minister, she torched the economy as she flamed out. Sunak created history―of the right kind. At 42, he is the youngest prime minister in more than 200 years; the first Indian-origin and Hindu to attain the post. He became an MP only seven years ago. Seven weeks ago, his party members defeated him. Now he makes a stunning comeback. His opponents bow out of the race and the crowning glory is not his election, but coronation as prime minister.

But Sunak can hardly savour the immensity of his coronation. His cheese is full of holes. In fact, the biggest is called the “black hole” of Britain’s finances, with a ￡40 billion gap in government finances alone. Truss inherited an economic crisis, which she rashly aggravated into a catastrophe in a fortnight. In her reckless push to “stimulate” growth by cutting taxes for the rich and borrowing money, she dragged Britain to the cliff of defaults, bankruptcies and negative growth. Her popularity ratings followed suit, plummeting to minus 70 per cent. Tory MP Iain Duncan Smith, a prominent backer of former prime minister Boris Johnson and Truss said, “No more messing around, it is time to get on with governing.” 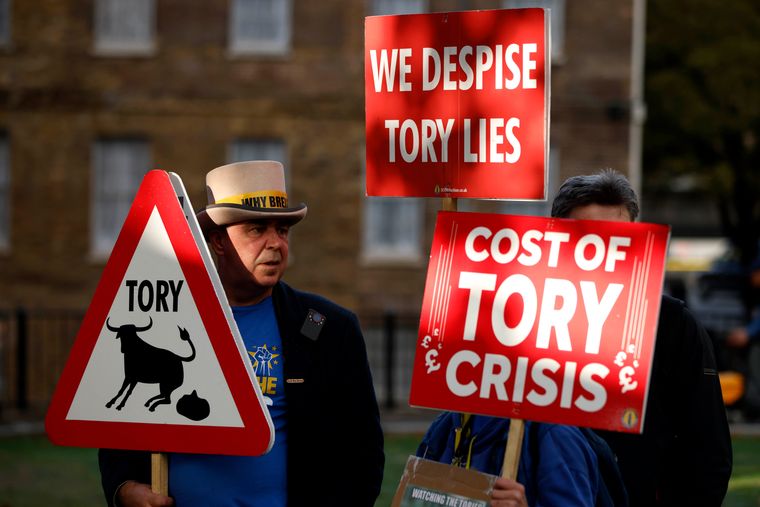 Easy to say, hard to do. Sunak stares into an economic abyss: a 1990s’ style recession, inflation rising to a painful 14 per cent―highest in four decades―and pound depreciation that makes imports costly. The average mortgage rate, which was 4.74 per cent before ‘Trussonomics’, rose to 7.32 per cent, jeopardising the homes of millions of Britons. Sunak had repeatedly warned about this during his campaign run against Truss two months ago. 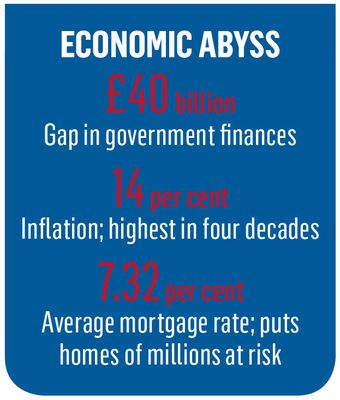 “I told you so” is grimly satisfying, but it is not policy. Now Sunak must clean up the mess. He has the skills, brains, fortitude and perseverance to do it. Fortune can continue to favour him, and he can emerge successful and unscathed. But it is a tough task. As finance minister Jeremy Hunt admitted, “the financial problems are eye-watering”. To balance the books, Sunak’s government must impose austerity, hike taxes and reduce public expenditure on health care, education, defence and pensions. This is tough to do at any time. Now, as Britain reels under the worst cost of living crisis in living memory, it is a “profound economic crisis”, said Sunak.

Frustrated by rising costs, stagnating pay and lower purchasing power, workers vow to intensify their strikes through this winter, when energy costs are expected to rise further. Teachers, nurses, rail and postal workers all threaten to walk out. Conceding their demands burns a bigger financial hole. In the Margaret Thatcher tradition, Sunak’s Conservative Party prefers to crush unions rather than negotiate. But any attempt to outlaw strikes or ignore the strikers risks prolonging industrial action, alienating voters and bringing Britain to a standstill.

Punitive action against workers will give more oxygen to the surging Labour Party. ‘Trussonomics’ gifted the opposition party with an unprecedented 36 per cent lead over the Tories. For this reason, Labour and other political parties are clamouring for fresh elections―constitutionally not needed for another two years. Sunak vetoes fresh elections. Even without polls, public alienation will be politically disastrous for him. Labour’s deputy leader Angela Rayner said, “Rishi Sunak has no mandate and no idea what working people need.” Labour attacks Sunak for his elitist “solutions” as finance minister, such as subsidising people to dine in restaurants during Covid when vaccines were nowhere in sight, his “partygate” fine during lockdown and wife’s non-domicile status to avoid taxes, which she renounced after the scandal erupted.

Sunak’s rich boy image is a drawback. But as with every Tory prime minister, Sunak’s real Achilles heel is his own party. A vast majority of Tory MPs support him, for now. If the temperature of public unrest rises even a few degrees, this majority will evaporate. The Tory party is a poisoned chalice brimming with venomous factionalism, intrigues and rivalries. An uncivil war seethes. Sunak is determined to rule judiciously and “fix” problems. His enemies are equally determined to fix him. Tory MP Christopher Chope said the party was ungovernable. “We are going to have continuing rebellions as we try to change policies,” he said.

Most reptilian is the Tory Brexiteer faction that owes allegiance to Johnson and engineered Truss’s victory in the first race. But early bird Truss left behind more than a can of worms. In popular British imagination, these Brexiteers are now labelled the “free-marketeer jihadists”. Their ultra-radical, pro-rich economic policies plunged Britain into turmoil and terminated Truss. They loathe Sunak, branding him “backstabber” for engineering Johnson’s downfall. His resignation as finance minister protesting his boss’s misdeeds contributed to the Johnson government’s collapse.

Circumstances enabled Sunak to beat the Brexiteers―their undoing was of their own doing. These Brexiteers have now retreated to sulk, skulk and lick their wounds. But they will return and strike at an opportune moment. Anticipating this, Sunak told his MPs, “Unite or die”. Sunak was not threatening to destroy them. He was implying that his fractious party risked becoming ridiculous and irrelevant, doomed to die out like dinosaurs. Three prime ministers in seven weeks is farcical. The Tories have 357 MPs―an 80-seat majority―that voters could vaporise in the next elections. It is doubtful if the message reached the intended targets. The Brexiteer-buccaneers inhabit a bygone world anyway.

Britain is being clobbered by their quixotic Brexit gamble. Covid and the Ukraine war that blew up energy prices have hurt the British economy severely. Britain has fared worse than other comparable European countries buffeted by these same headwinds. The mantra finally rings in Britain: “It is Brexit, stupid.” Brexit has failed to deliver the economic windfall peddled by the Johnson brigade. Recent statistics are damning. Brexit has shaved 4 per cent off Britain’s GDP. British economy was 90 per cent of the German economy in 2016. Now it has shrunk to 70 per cent. Britain’s acute shortage of skilled workers is blamed on Brexit barriers. Trade has tumbled. “Sunak will end Britain’s political nervous breakdown and improve ties with the European Union. If he really wants to grow the British economy, he needs a free trade deal with the EU,” said EU affairs expert Jonathan Charles. Analysts see Sunak as a pragmatic internationalist who will strive to repair relations and restore Britain’s global reputation. The quip is, “Even this is outsourced to an Indian.”

Indian-origin Britons, like Indians, are thrilled by Sunak’s meteoric rise. Filled with pride at his achievement, they burst crackers and stormed pubs. But the reality is that their life and fortunes are not comparable with Sunak’s, just as those are not with any elite white boy’s. As prime minister, Sunak governs Britain not with India or Indians in mind. If anything, realpolitik demands he shows no softness or favours. This fact explains why African-Americans were so disappointed with Barack Obama. People had unrealistic expectations while Obama made realistic assessments of his limitations and risks.

Sunak has studied the risks, limitations and problems lying ahead. Britain’s politics, economics and social matrix are a minefield. During his two-year stint as finance minister, Sunak managed the Covid crisis with social and salary protections. He now plans to implement the 2019 Tory election manifesto: improving health, education and environment and “levelling” up poorer British regions. Johnson won that election spectacularly, but did little to implement the pledges. The financial crisis is severe, but Sunak could conjure creative, modern “fixes”. To succeed as prime minister, Sunak must neutralise the personal hatreds and ideological fixations among the Tories and nudge the party to rediscover its fabled “pragmatism”. For all its flaws, the Conservative Party has also been a bold, pioneering “broad church” that accommodates diversity. It was the first party to have a Jewish PM, a woman PM and now an Indian-origin PM.

Sunak’s story is the stuff of legends. In mythology, the humble mouse symbolises intelligence, perseverance, adaptability and resourcefulness. It can fend for itself and survive even in the harshest conditions. Instead of being overwhelmed by the complexity of listening, watching and sniffing for distant predators, it does the opposite―focusing on the immediate. Tell-tale signs nearby warn him of dangers afar.

Sunak treads in a treacherous environment of prowling enemies and harsh economic conditions. But silver linings glimmer. Most people see the foolish hollowness of Johnson’s “cakeism”―you can have your cake and eat it, too, and then Truss’s “fantasy economics”. People now want governance to be less theatre and more carpentry―doing the nuts and bolts of economic repair. Many conservatives understand that they have one remaining chance of reversing their own and the country’s fading fortunes. It is the last brown hope. Sunak’s biggest asset is his awareness that his coronation comes with a crown of thorns.