Sinhalas turn against the Rajapaksa clan 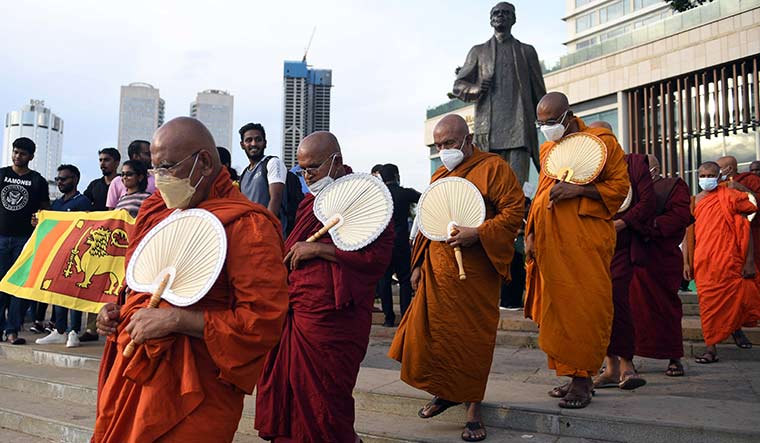 THE ROAD LEADING to the Amma Maniyo temple from the grand Ruwanweli Maha Seya stupa in Anuradhapura, built by the legendary Sinhala king Dutugamunu, is mostly quiet these days. Anuradhapura, the ancient Buddhist capital of the island nation, holds special significance for President Gotabaya Rajapaksa. After the landslide win in the 2019 polls, Gotabaya took oath as president at the stupa, in the presence of Buddhist clergy from across the country. His address to the nation was laced with references to a militarised vision for Sri Lanka’s future, rooted firmly in the Sinhala Buddhist ideology. He made it clear to all that he was voted to power by the Sinhalas.

Three years later, as Sri Lanka totters down the path of economic collapse, the Sinhalas seem to have abandoned Gotabaya. Historically, protests against the Rajapaksas, especially Gotabaya and his elder brother, Prime Minister Mahinda Rajpaksa, were spearheaded by the country’s Tamil and Muslim minorities. But this time, a majority of the Sinhalas, too, have turned against the government. Not even Gotabaya’s trusted soothsayer, Gnana Akka, who advises him on key issues, including the Covid-19 lockdowns, could predict such a rapid reversal of fortunes. There are hardly any visitors at the Maniyo temple and the Ruwanweli stupa these days, thanks to the economic crisis caused by Gotabaya’s harebrained policies.

Down south in the capital city of Colombo, the situation is even worse. A tented village called Go Gota Gama has come up outside the presidential secretariat where protesters have been camping to put pressure on Gotabaya to resign. The country is caught in a spiralling debt crisis and has exhausted its foreign exchange reserves. The situation is so precarious that foreign tourists are advised by flight attendants to retain their currency exchange receipts till they return. All national banks have been rated negative by global rating agencies. “The people are angry. The government is totally responsible for this,” said former prime minister Ranil Wickremesinghe, who heads the United National Party.

Sri Lanka is going through the worst economic crisis in its history, with food and fuel shortage crippling everyday life. The anti-government protests which began in March continues unabated. Initially, the protests were limited to Colombo, but after the police shot and killed a protester named Chaminda Lakshan at Rambukkana, about 100km from the capital, demonstrations have spread across the country. Plantation workers from Kandy, farmers from Polonnaruwa, tea estate workers from Nuwara Eliya and Tamils from the north and the east have joined hands against the Rajapaksas. 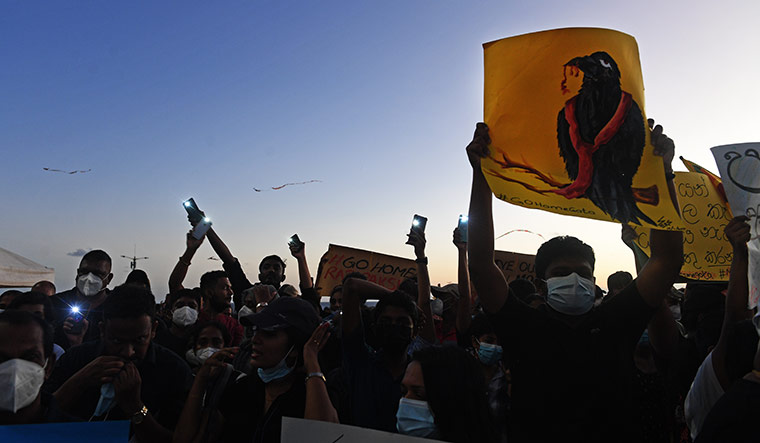 Fighters with a cause: Protesters at Colombo’s Galle Face demanding the ouster of President Gotabaya Rajapaksa | Bhanu Prakash Chandra

Even the Sinhala-Tamil new year, which is the major festival in Sri Lanka, saw huge protests. The Rajapaksas used to send text messages to mark the occasion in the past, but they remained silent this time, as they knew that it would only anger people further.

Most Sri Lankans feel that a change in leadership is the only way to resolve the crisis. “For the first time, the Sinhalas are questioning 74 years of the Sinhala leadership system. The Tamils have said for the last 74 years that this system is a failure,” said Jaffna MP G. Ponnambalam. “It is an exclusivist system that sidelines people and creates enemies within the state. It is time the Sinhala people realised that their leaders would never tell them the truth. Federalism has nothing to do with separation.” 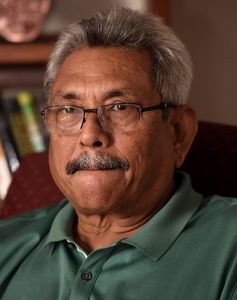 Feeling the heat, Gotabaya dropped his brothers, Chamal and Basil, and his nephew, Namal, from the cabinet. Basil, who was one of the most powerful Rajapaksas, has been made voiceless, both in the government and in the family. And the disquiet is apparent within the ranks of the government as well. Minister of Mass Media Nalaka Godahewa, who used to be a staunch Rajapaksa loyalist, has called for removing Mahinda from the post of prime minister. “The government has lost its credibility,” he said.

The protesters, too, are not impressed with the cabinet reshuffle, although all 26 members except the prime minister resigned last month. They want Gotabaya and Mahinda to go. Critics of the government were appalled by the initial reluctance of the government to seek help from the International Monetary Fund (IMF) before the crisis became worse.

Gotabaya, a former soldier, has proved to be an inept administrator. Most of his advisers are retired army officers who always try to find military solutions to administrative problems. Moreover, Gotabaya has never been a charismatic leader like Mahinda, who has been the face of the Sri Lanka Podujana Party, or a shrewd strategist, like Basil.

Key members of the influential Buddhist clergy, who once stood solidly with the Rajapaksas, too, have switched sides. They are present in large numbers at the Go Gota Gama protest site. In the staunchly pro-Buddhist towns in southern Sri Lanka, which used to cheer when Tamils and Muslims were targeted, there are now waves of protests against the Rajapaksa regime. With the Rajapaksas becoming increasingly unpopular, the opposition is trying to get the 20th amendment to the constitution scrapped in an attempt to curtail the unbridled powers of the executive presidency. But the efforts have so far been unsuccessful.

Despite the growing political unrest and financial crisis, the Rajapaksas are not yet willing to cede control. While Chamal, Basil and Namal have been ousted, there are no signs of the two big brothers—Gotabaya and Mahinda—stepping down. Mahinda, in fact, said he would remain at the helm even if the cabinet was restructured or the executive presidency was dismantled. “What is the use of interim governments when people with varying policies cannot see eye to eye? If there is need for an interim government, it should happen only under my leadership,” said Mahinda, who knows that with a two-thirds majority in the parliament and the opposition in disarray, it may not be easy to dislodge the government.

The opposition Samagi Jana Balawegaya led by Sajith Premadasa lost the initiative as it was late in bringing a no-confidence motion against the government. But again, the motion may not have been successful because of the lack of numbers. Premadasa also knows that it may not be possible for any single politician to lead Sri Lanka out of the ongoing crisis. “What Sri Lanka is witnessing is pauperisation. The implosion that we are seeing now is the accumulated social anger getting blown up, finally. The opposition and the dissenters in the ruling alliance are finding it hard to find a legal way out to break the political stalemate,” said political scientist Jayadeva Uyangoda.

Fisheries Minister Douglas Devananda, however, said that those who were protesting against the government had voted against the Rajapaksas in the presidential and parliamentary polls. “This government got 69 lakh votes. Those people are still for the government,” said Devananda. He said trade liberalisation, ethnic war and the loans taken for development were the major reasons behind the crisis. “I am part of the cabinet. This government under the Rajapaksas is handling the crisis very well, like it handled the Covid-19 pandemic,” he said.

Devananda’s explanation may not satisfy the protesters, as they wait for new finance minister Ali Sabry to get the IMF to agree to a bailout package. Sabry, who once served as Gotabaya’s personal lawyer, is in the US, holding negotiations with the IMF. “It is going to get worse before it gets better,” said Sabry. “There are going to be painful years ahead.”