India is the 'only way out' for many Sri Lankan Tamils

Economic crisis has made Tamils in Northern, Eastern Provinces desperate 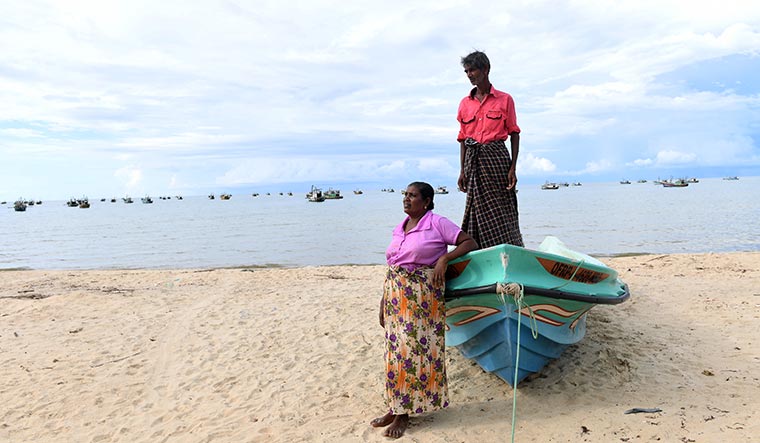 Staying afloat: Sebamalai Anthonika and her husband, Sebamalai Cruz, of Pesalai village in Mannar district are anxious about their family’s future in Sri Lanka.

At Pesalai, a fishing village in Sri Lanka’s Mannar district, 59-year-old Sebamalai Cruz and his wife, Sebamalai Anthonika, are mending fishing nets. Waves lash the shore as Anthonika tells Cruz about the long queue at Sathosa, the government’s concessionary retail chain. “How can we live here without food and fuel? How will we support our grandchildren?” she asks, staring at the sea. “Wait,” replies Cruz, “there will be a way out.”

But Anthonika is not convinced. She talks about an officer of the Sri Lankan navy who recently asked her if the family was planning to leave for India as refugees. “I told him that I don’t mind doing so even if we get arrested and are sent to prison,” Anthonika tells THE WEEK. “Everything is expensive here. There is no diesel for our boats to go to sea.”

The Sri Lankan navy has set up checkpoints along the Mannar coast to keep tabs on boats putting out to sea. “They are watching us 24x7,” says Jascintha Cruz, Anthonika’s 51-year-old neighbour who is also struggling to make ends meet. “The cost of one kilo sugar is LKR 190 now. I used to have tea every morning. First, I stopped buying milk powder, as it became expensive. Now, sugar is also expensive. So I have black tea without sugar. With the ever-increasing prices, the day I stop having tea altogether does not seem very far.”

What is the way out? “What else, we should go to India,” says Jascintha.

Standing next to her is 35-year old Ruby Raghunathan, who is worried about her two daughters. “The new academic year will begin soon,” says Ruby. “My daughters had not been going to school because of the pandemic. Who will help us during these trying times? We don’t even have a friendly government that cares for people like us.”

A few kilometres away, Nisanthini, 41, and her 13-year old daughter are making their way home with a bag of rice from Sathosa. “It was a five-hour wait in the queue,” says Nisanthini, who is worried that the ration will last only a week. “We want to go to India. But [President] Gotabaya Rajapaksa’s army and navy will not allow us to go.” 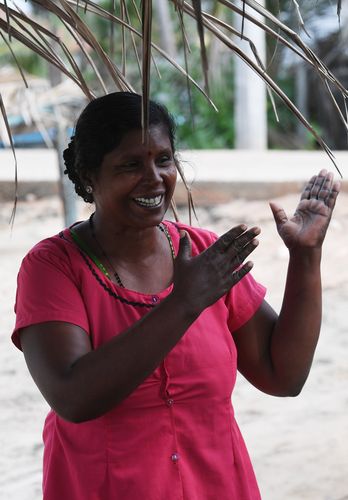 Since the early 1980s, when Sri Lanka began to witness conflicts between security forces and the Liberation Tigers of Tamil Eelam, Mannar district has been a strategic point for those looking to migrate to India. The distance between Mannar and Rameshwaram in Tamil Nadu is 12 nautical miles (around 27km). A boat journey across the Gulf of Mannar, which is separated from the Palk Strait by a strip of low islands called Adam’s Bridge, takes around two hours.

Fisherfolk dominate the coastal villages in Mannar district. At least 60 per cent of the families in the district were once refugees in India. “I came back in 2012,” says Roshan, a fisherman in Thalaimannar, who was in a refugee camp in Tamil Nadu for 12 years. Roshan had vowed never to go to India again, but the situation in his village is worsening. “We don’t have diesel for our fishing boats,” he says.

It has been a week since he ventured out to sea. “We have been facing problems because of the huge trawlers used by the Tamil Nadu fishermen. Now, with the diesel shortage, our lives are doomed,” he says.

Roshan and his friends in Thalaimannar, however, have no plans to go to India. “The revenue from fishing in the Northern Province alone is enough for taking care of the Tamils in the north,” he says. “We don’t need the support of the government; we just need diesel.”

Not many people share the view, though. Siana Ranjan of Thalaimannar says people were running out of options. “We had pledged all the gold we had to feed our families during the pandemic,” she says. “Now there is inflation, and there are no jobs. What do you think we can do? India is the only way out.”

Siana feels that only India can save them if the grim situation persists. “[Tamil Nadu] Chief Minister M.K. Stalin has promised to help us,” says Siana. “If he sends help, we would stay back here. Otherwise, we have to seek refuge in Tamil Nadu.”

Though the economic crisis is deepening, people in Mannar and parts of Northern and Eastern Provinces have not hit the streets in protest. They are not holding demonstrations, raising slogans and waving placards like the Sinhalese in the south. They are focused on wanting to find a better place to live a peaceful life; a place where they can get three square meals a day.

The Sri Lankan navy, however, is keeping an eagle eye on them. Intelligence reports in India estimate that at least 2,000 people Sri Lanka are waiting to enter India illegally.

While people in the north and the east have to risk lives to reach India, upper middle-class families in Colombo are increasingly applying for visas to leave the country. The departure section at the Bandaranaike International Airport in Colombo has been busy of late. Flights to Chennai, Frankfurt, Singapore and Paris have been flying full in the past few days, thanks to Sri Lankan nationals who can afford to stay away from the country.

A Sinhalese couple that this writer met on the flight out of Colombo said they would be in Chennai on a tourist visa for at least a month. “We are not sure how things would change,” said Dinouk Wellikumbara, the husband. “But we can’t live in Colombo.”