The dilemma of MBBS students from Ukraine 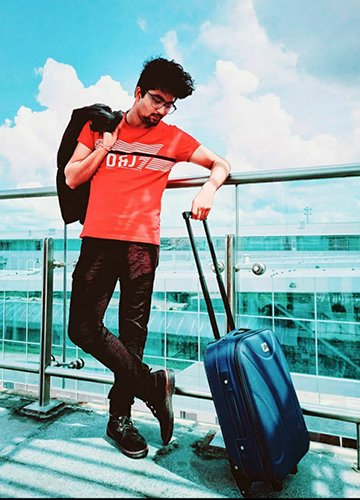 Home bound: Aryan Raj, a second-year student at Uzhhorod Medical University. His father says the National Medical Council should bridge the differences between medical progammes in India and Ukraine.

THE FIRST PARAGRAPH of a 2014 research paper—‘Rehabilitation and Compensation of Migrants after Partition’—explains how displaced students and trainees were rehabilitated in India after the partition. Seating capacity in institutions was expanded, double shifts were introduced and new colleges were erected. “Students from colleges and technical institutions were offered loans, scholarships, and “exemption from the payment of fees was also sanctioned for the purchase of books, etc,” says the study published in the International Journal of Multidisciplinary and Scientific Emerging Research. The highest loans were offered to medical students: Rs100 a month, in addition to tuition fees.

Himanshu Shukla, a fourth-year student of Ivano-Frankivsk National Medical University in Ukraine, dramatically invokes the story of this rehabilitation to drive home his helplessness. “Even though the government had less money then, overnight colleges were created for students who ran away from places like Lahore,” says Shukla, on phone from his home in Lucknow. He returned to India on March 6 after Russia invaded Ukraine on February 24. Shukla’s Ukrainian friends helped him reach the Romanian border. He is trying to gather his scattered friends in Delhi so that they can start offline classes in coaching centres to align their lessons with the Indian medical curriculum.

“Our college in Ukraine says they are hoping to rebuild airports by September. Maybe, we can go back in six months,” says Shukla, sounding confused and hopeful at the same time. He wants to be prepared to stay on in India, but is unsure how the compensatory funds and facilities provided by the Indian government might help his long-term career prospects. “They cannot expect us to do a mandatory seven years of rural service to get a seat in a government college,” says Shukla.

As academicians, medical bodies and government stakeholders mull ways to accommodate the thousands of medical students who fled war-torn Ukraine, students and parents are familiarising themselves with the rules and conditions that govern medical education in India.

WhatsApp groups like “Ukraine Parents Only” are abuzz with anticipation as updates come in about how Chief Minister Mamata Banerjee might induct students in different medical colleges in West Bengal, followed by tweets by Rajya Sabha members urging the government to act immediately.

Most of the students who spoke to THE WEEK are not hopeful of returning to Ukraine. They say online classes are a joke. “Online classes will help generate more money for the beleaguered Ukrainian government, because colleges can show they have completed the semester—even if by remote learning,” says the Delhi-based Siddharth Saini, a fourth-year student from Vinnytsia National Pirogov Medical University. “You think our sleepless teachers, who react fearfully to bombs and sirens in the middle of classes, can teach anything at this point?” He adds that the Indian regulatory body for medical professionals, the National Medical Council (NMC), does not even recognise medical courses conducted online.

For now, as a respite, final year students have been spared Krok 2—a mandatory state licensing examination in Ukraine without which they cannot get their degrees. The NMC has also allowed final-year foreign medical students to complete their internships in India. This applies to those whose studies have been disrupted due to Covid-19 and the war in Ukraine. But this can only be done after the candidates clear the Foreign Medical Graduate Examination (FMGE), which has often been accused of lacking transparency and, hence, being difficult to crack. FMGE is set to be replaced by a National Exit Test (NExT) for all final year MBBS students irrespective of whether they studied in India or abroad. 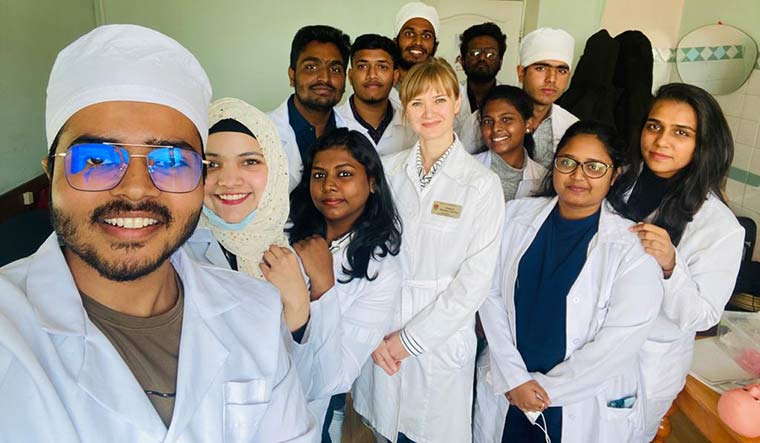 Happier times: Siddharth Saini, a fourth-year student at Vinnytsia National Pirogov Medical University, says continuing with online classes is not at all helpful.

Even if new rules are promulgated to ensure absorption of students from Ukraine in public and private medical colleges in India, the complications will arise in implementing a sense of “equivalency”, says Gajraj Singh Yadav, assistant professor of biochemistry at Raipur Institute of Medical Sciences. His son Aryan Raj is a second-year student at Uzhhorod Medical University in Ukraine. “Indian medical colleges have a curriculum of four-and-a-half years. In Ukraine, it is almost six years. For example, anatomy and physiology courses are completed [in India] in the first year itself. In Ukraine, anatomy classes continue till the third semester. NMC will have to come up with ways to level such differences,” says Yadav.

Advocate Rana Sandeep Bussa and others have filed a writ petition in the Supreme Court praying for admission and continuation of studies for Ukraine returnees. At this point, he is most concerned about getting the courts to institute a commission to look at innovative ‘educational rehabilitation’programmes for these students. Especially for those who are in the first five years of the course. “The problem of equivalency can be solved with programmes that can run for three months or so. Later, students can be integrated in such a way that they get to catch up in a shift-like system followed by factories or companies. These double-shift classes are important because colleges are bound to say that they don’t have seats or infrastructure or staff. But these are extraordinary circumstances and rules are always amended in light of events like an act of God or war,” says Bussa, reminding that the United Nations has designated September 9 as International Day to Protect Education from Attack and that India is a signatory to this charter.

Bussa contends that absorbing displaced Indian medical students from foreign countries will help improve the doctor-population ratio in the country. However, Dr Ravi Wankhedkar, treasurer of the World Medical Association and former president of the IMA, points out there is no shortage of doctors in the country as per WHO norms. “However, there is a mismatch between urban and rural areas and between some states. Southern states have a ratio three to four times the World Health Organization norm. It is due to blatant privatisation of medical education that leads to higher costs and further increases in the urban-rural divide as the rich who can afford the high cost are concentrated in urban areas. Those urban students who become doctors from private colleges never go to rural areas. And, government or the community should not expect service from students who pay Rs1 crore for MBBS and Rs3 crore for MD/MS,” says Wankhedkar, adding that absorption of Ukraine-returned students will do nothing to improve any rural-urban divide which is a result of bad governance and a system which perpetuates exploitative private players.

After 2019, almost all students who joined universities outside India had qualified for the National Eligibility cum Entrance Test (Undergraduate) or NEET, the all-India pre-medical entrance test for MBBS degrees. Even so, many could not apply for seats in private medical colleges due to prohibitive costs ranging from Rs70 lakh to Rs1.5 crore. Often, snide remarks are hurled at students who chose medical universities in eastern Europe, saying that they are incompetent and do not have good NEET scores. But several high scorers in NEET, with marks ranging between 400 and 500 out of 720, have been forced to leave India because of a shortage of seats in government colleges and unrealistic costs in the private ones. Wankhedkar says there is still time to wait and watch even as wide-ranging consultations take place to find immediate solutions for rehabilitation.

“The rule in India says that one has to complete MBBS in ten years, so there is no harm in waiting for a few months to see how the situation settles in Ukraine. Poland is offering to accommodate students with the same fee structure. The bottom line is there is no hurry,” says Wankhedkar.