Seeking reparations from British royals no longer a fringe demand 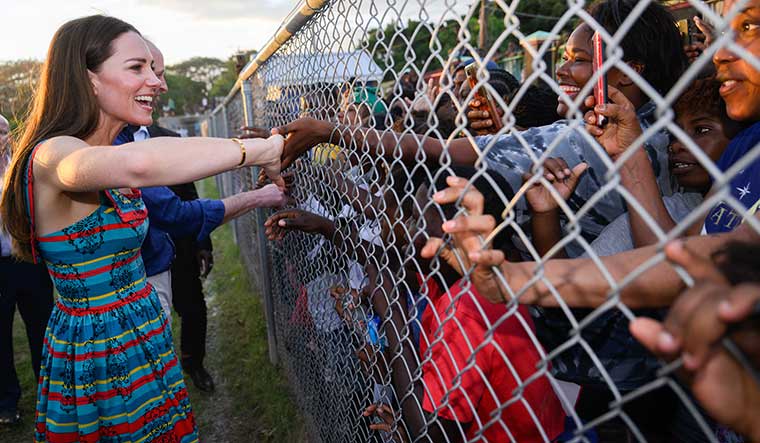 Crown, frown: The duke and duchess of Cambridge visit Trench Town, Jamaica, during their week-long Platinum Jubilee Royal Tour of the Caribbean. This photograph was criticised for being tone-deaf, evoking images of imperial arrogance and racial discrimination | Getty Images

As royals go, the duke and duchess of Cambridge are near perfect. Good-looking, assured and alluringly attired, they waft through crowds with an easy charm, leaving a warm, fuzzy feeling behind. But their visit to the Caribbean nations came a cropper. Not because their winsome smiles lacked any lustre or their practised concern any of its solicitousness, but simply because they came up against the harsh reckoning of history. Angry protests, centred around painful memories of colonial repression and the slave trade, followed Prince William and Kate Middleton from Belize to Jamaica to the Bahamas. Avoidable public diplomacy gaffes made matters worse: the duchess shaking hands with Jamaican children through a wire fence and the royal couple, dressed in white, inspecting a military parade from an open-top Land Rover, only served to evoke images of racial discrimination and imperial arrogance. The tour, intended to bolster support for the British royals in their former colonies in the queen’s platinum jubilee year, ended up as a PR disaster. The result: an even bigger question mark now hovers over the future relationship of the Caribbean nations with the Crown.

The protests could not have been a total surprise. The ancestors of the royal family, including Elizabeth I and Charles II, are seen as direct beneficiaries of the flourishing slave trade that took 12 million Africans in chains to the Americas; six lakh slaves ended up in the sugar plantations of Jamaica alone. Two centuries of this free slave labour, followed by indentured labour from India, helped Britain build and modernise its economy. Demands for an apology for historical wrongs and reparations for the atrocities committed have become louder. Added to this is the spreading Republicanism in the region; Barbados removed the queen as its head of state last year. Now, as Prince William listened impassively, Jamaica Prime Minister Andrew Holness announced that his country, too, was “moving on”; the scene seems set for Jamaica to follow Barbados, and that may trigger a domino effect. Those planning the visit seemed to have ignored, or underestimated, all this as well as the sharp focus that the Black Lives Matter movement has brought to bear on racial oppression; their naïve hope may have been that despite the ominous signs, Britain’s perceived superiority and royal charm would carry the day.

Responding to the protests, Prince William did bite the bullet and express “profound sorrow” for “abhorrent” slavery during a dinner speech in Jamaica, following on his father’s earlier statement in Barbados that the “atrocity of slavery… stains our history”. From the point of view of the victims, these statements fall short of an outright apology and only serve to fuel further anger. Indians are familiar with this refusal to simply say sorry: our calls for an apology for the Jallianwala Bagh massacre have been similarly parried with linguistic guile, the last example of which was Theresa May’s expression of “deep regret” over the heinous 1919 massacre.

An apology, some believe, would provide a legal basis to the moral case for reparations. In any case, reparations are no longer a fringe demand. The Caribbean Community (CARICOM) has formally put forward a ten-point plan to European countries seeking reparations; 100 prominent Jamaicans have demanded reparations in an open letter to the monarchy, and one Jamaican lawmaker has calculated $10 billion as the asking price. But reparations go beyond money alone; they require compensation for mass murder, untold suffering and the total loss of spiritual, intellectual and cultural heritage. Those opposing reparations term them as unrealistic; the crimes committed by past generations, it is argued, cannot be paid for by present ones. 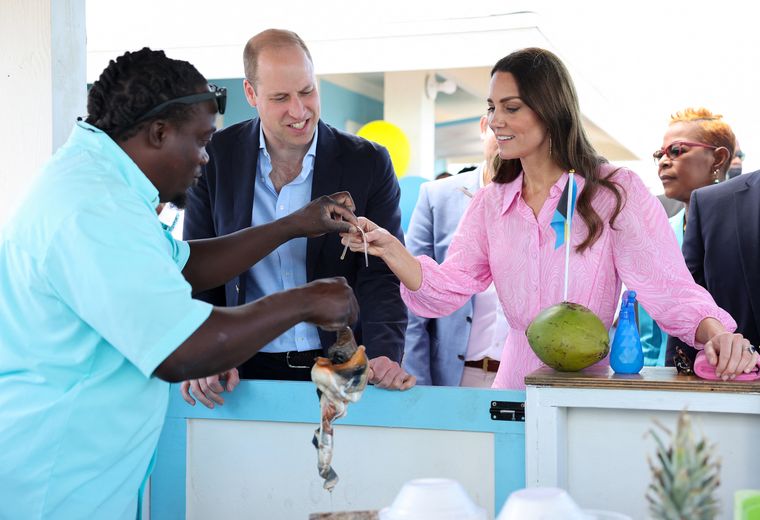 In deep water: William and Kate at a Fish Fry, a quintessentially Bahamian culinary gathering place that is found on every island in the Bahamas, on Great Abaco island | Reuters

But what gives the demand an undeniable edge is that reparations have been paid in the past—only not to the enslaved, but to the slave-owners. Revolutionary Haiti overthrew slavery in 1804 and had to pay nearly 8,000 French slave-owners some 150 million francs plus loan interests over 122 years as compensation for the loss of their “property”. The British government paid an equivalent of 300 billion (2018 value) to former slave owners as compensation after abolishing slavery in 1834; the last payment was made as recently as 2015. At the height of the Civil War, the US government paid slave-owners $300 for each freed slave; payments of similar reparations to slave-owners appear in the records of several European and Latin American nations.

All this adds up to a few hard facts, which can be examined after the bruised royal egos have been salved: the world is changing and nostalgia for a lost empire is no longer good currency; the dead past can still return to haunt our present; wounds have to be cauterised or they continue to fester. And the ship that helped Britannia rule the waves has long since sailed.

The writer is former high commissioner to the Court of St James’s and former ambassador to the United States.