What Sri Lanka did may qualify as war crime: Norwegian diplomat Erik Solheim 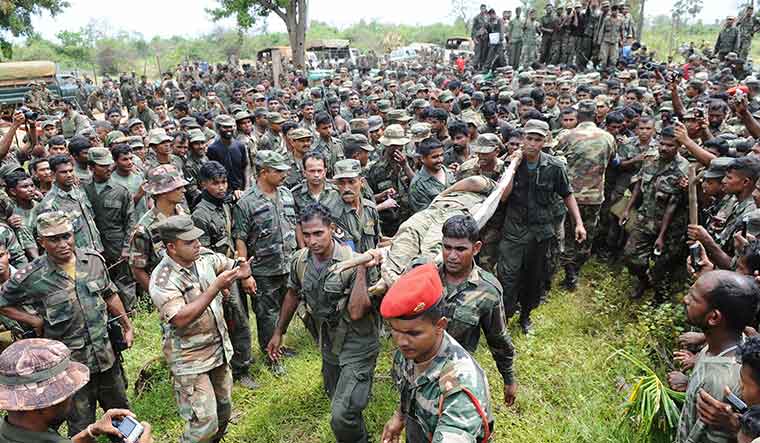 The victors and the vanquished: Sri Lankan soldiers in Mullaitivu district carrying the remains of Prabhakaran in May 2009 | AFP

Prabhakaran was allegedly shot dead by the Sri Lankan army, but not much is known about his final days. There are unconfirmed claims that he had offered to surrender.

THE WEEK interviewed Erik Solheim, former Norwegian diplomat and minister who had tried to negotiate a peace deal between the Sri Lankan government and the LTTE in the early 2000s. Solheim was a confidant of Prabhakaran, and the only outsider who met him several times before the ceasefire was broken and the final battle played out.

Solheim is now the convenor of the advisory committee of The Belt and Road Initiative International Green Development Coalition (BRIGC) at the World Resources Institute (WRI) in Washington, DC. BRIGC is a non-profit organisation that works with leaders in government, business and civil society to promote green initiatives. It is supervised by the Chinese Ministry of Ecology and Environment and has its own secretariat.

Solheim was in Chennai recently on WRI business. He spoke to THE WEEK about how the LTTE reached out to the world during the final days of the war, and how Prabhakaran rejected an offer from Norway and the international community.

Excerpts from the interview.

Q/ What actually happened in the last leg of the war?

A/ I don’t have any specific information. In the last few days of the war, the LTTE was contained to a small area in eastern Sri Lanka. On May 17, 2009—before the white flag incident (the alleged massacre of surrendering LTTE leaders and their families)—LTTE peace secretariat chief [Seevaratnam] Pulidevan called us and said he and [Balasingham] Nadesan, the head of the political wing of the LTTE, wanted to surrender to the Sri Lankan forces and wanted our involvement in that. We told him that it was too late.

We had, on many other occasions, proposed to end the war in a peaceful manner. But now there wasn’t much we could have done, because we were not on the ground. But we promised to inform Basil Rajapaksa, brother of president Mahinda Rajapaksa, about the LTTE’s intention to surrender. And we informed the president, too, the same afternoon. So, the government was well aware of Nadesan and Pulidevan’s intention to surrender.

Q/ You say the LTTE wanted to surrender. Does it mean that Prabhakaran, too, wanted it?

A/ They did not mention Prabhakaran. They only mentioned Pulidevan and Nadesan. We do not know if Prabhakaran was in the same place or somewhere else. Thereafter we got a message that Nadesan and Pulidevan had been killed. The most likely scenario is that they surrendered to the Sri Lankan forces and were executed. But, of course, we were not witness to this.

Q/ But why did they surrender? Was there no other option?

A/ This was the absolute end. They had to either fight it out or surrender.

Q/ There have been reports that Prabhakaran also surrendered.

A/ I have no knowledge on that matter. But the sure information I have is that his younger son, then 12 years old, was captured by Sri Lankan forces. The video clearly showed him with Sri Lankan soldiers, and then he disappeared. In all likelihood, he was executed after surrendering. A war crime, of course.

Q/ What do you know about Prabhakaran’s final hours?

A/ I do not have any answer to that. I think the world needs to know exactly what happened. The Tamil side or the Sri Lankan army should come forward and tell the truth.

Q/ But you said the LTTE reached out to you.

A/ They reached out to us, yes. But we do not have any information on Prabhakaran. In the last few months of the war, we communicated with Pulidevan and Nadesan and, through them, with Prabhakaran. We had invited KP (LTTE leader Kumaran Pathmanathan) to Oslo, because he was the LTTE’s foreign policy spokesperson based in Singapore.

KP agreed to come, and he arranged to take [Prabhakaran] from Singapore to Norway. But the meeting was cancelled at the last minute, obviously on Prabhakaran’s orders. So Prabhakaran constantly refused to organise an end to the war, which could have saved many lives. 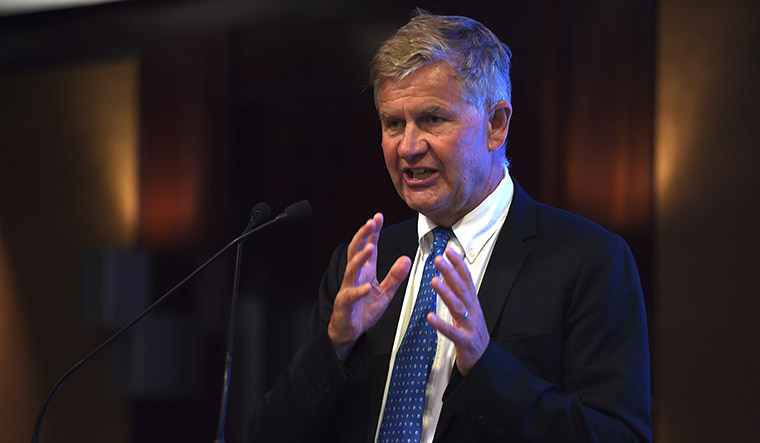 Q/ You said the LTTE reached out to you on May 17, 2009. What was the situation before that day? Where was Prabhakaran?

A/ Before May 17, 2009, the main issue for us was to find an organised end to the war. It was very clear that the LTTE would lose. We wanted to save the lives of tens of thousands of Tamil and Sinhalese people. We wanted UN secretary general Ban Ki-moon and other dignitaries to negotiate a deal with Prabhakaran.

The deal was that Indian or US ships, flying the UN flag, would evacuate civilians and LTTE cadre from the war zone. Names and photos would be registered to ensure that those who surrendered would not be harmed. There were indications that the LTTE would accept this deal. But [ultimately] they did not. They wanted to fight till the last moment.

A/ At that time, there was no way we could speak directly with Prabhakaran. He felt that the government would track his call and bomb the location. We communicated with him through Nadesan or Pulidevan. They spoke to us many times a week and told us that all was well, but we knew that they were losing ground. In fact, we spoke to them even on the day before they were to evacuate Kilinochchi, which was surrounded by Sri Lankan forces.

Q/ If the LTTE had accepted the deal, would there have been a separate Eelam?

Q/ What kind of a person was Prabhakaran?

A/ He was not a charismatic person. There was a language barrier; we could not communicate with him in his language. He was more of a military man than a visionary leader. Be it losing the Jaffna peninsula in 2001 or destroying the Bandaranaike airport, and of course the assassinations of Rajiv Gandhi, Lakshman Kadirgamar and others, came from the military point of view.

The LTTE was the world’s first rebel group with a navy and air force. I can say that, until the later part of his life, he was an absolutely brilliant military leader. His political vision, however, was not in line with his military acumen. He did not understand India well; he did not understand the rest of the world. If he had understood India well, he would not have committed the blunder of killing Rajiv Gandhi.

He used to listen to [journalist and strategist] Anton Balasingham in all these matters. But after Balasingham died [in 2006], the LTTE began losing ground. I think Prabhakaran believed that there was a military solution to every problem.

Q/ Would you say that India offered support to the peace process?

A/ Except in the very last few months, India was always for peace in Sri Lanka. India was sceptical and suspicious of the LTTE, because of the Rajiv Gandhi (assassination). But India continuously gave all possible support to the peace talks. Then, after 2008, India’s mood changed. That was the first time [India] thought that the Sri Lankan government could win the war. It was then that India gave all intelligence support to them.

Q/ But you said India was always for peace.

A/ That is because the LTTE did not keep its promise [on ceasefire] earlier. After 2008, India did not trust Prabhakaran.

Q/ Would you say that the war involved ethnic cleansing or genocide?

A/ I normally don’t use that word. But the mass murder of tens of thousands Tamilians certainly happened. Hospitals and civilian institutions were shelled. It was very, very bad; it may qualify as a war crime.

Q/ Do you think the LTTE is regrouping, because the diaspora has always been for Eelam?

A/ I don’t think so. The appetite for an armed struggle in Sri Lanka has gone down. But I think the Tamil diaspora is regrouping for a much stronger civil push based on Gandhian methods.

Q/ But in many countries, including India, the ban on LTTE has not been lifted. Can this be justified?

A/ The LTTE does not exist at the moment, so the ban is not significant in my view. What is important now is to support the legitimate struggle of the Tamil National Alliance and other political parties which want to promote Tamil rights in Sri Lanka. The leadership must come from Sri Lanka itself.

Q/ What do you have to say about the present dispensation in Sri Lanka and their commitment to the 13th amendment, which created provincial councils and made Tamil an official language?

A/ The 13th amendment has been declared as a solution by India. Prime Minister Narendra Modi brought it up. External Affairs Minister S. Jaishankar and other leaders in India have been repeatedly asking Sri Lanka to implement it. I agree with them.

The Tamils of Sri Lanka should fight to expand their political space, ensure that peace remains and help devolve power. So, my advice to Tamils would be to maintain unity. And they should reach out to both Muslims and Sinhalese to find common ground. Indeed, the space for Tamils is far too limited in Sri Lanka. The international community should support the Tamil fight for expanding that space.

Q/ There is a growing concern in India about Chinese investments in Sri Lanka. Do you think that a geopolitical change is happening south Asia?

A/ When we were involved in Sri Lanka, China did not play any significant role there. We were all focused on India and, to some extent, on the US. China did not have major investments there at that time.

But now, it could be a difficult situation. China is investing everywhere in the world, and most countries benefit from these investments. So, Sri Lanka, in that sense, is not a separate case. China has also invested in India, but not as part of its Belt and Road Initiative.

Q/ But my question is specific. Is this altering the geopolitics in the region?

A/ I don’t think I want to comment on this. I would like to stay away from that.

Q/ What is the relationship between Norway and Sri Lanka, now that the LTTE is no more and Gotabaya Rajapaksa is president?

A/ We have a normal relationship with Sri Lanka. We have an embassy there, and trade and economic relations. But there are no special ties, as had been the case during the peace process. We no longer have a close relationship with top leaders.

Q/ You recently had a meeting with Tamil Nadu Governor R.N. Ravi. Did you discuss the LTTE issue?

A/ We did not talk about Sri Lanka. We spoke only about Covid-19 and environmental issues.