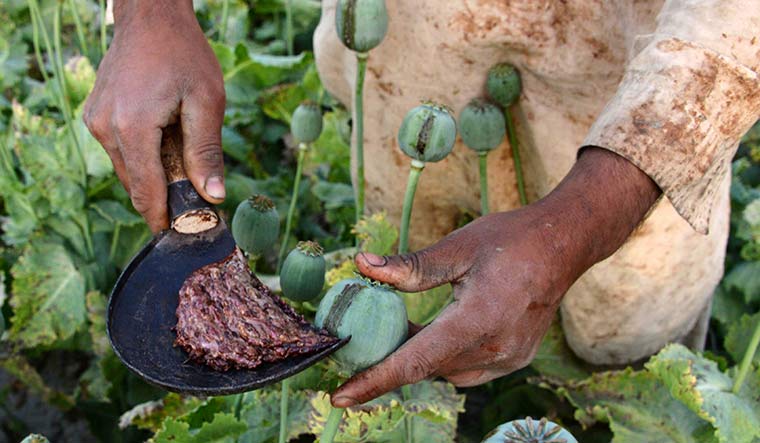 Under influence: An Afghan farmer harvests opium sap from a poppy field in Nangarhar province near Jalalabad | AFP

Haji Bashir Noorzai—nicknamed Pablo Escobar of the Middle East—might have been a forgotten name since his arrest in New York, 16 years ago. But the top Afghan drug lord could make a comeback as the new Taliban government is reportedly negotiating with the US administration to secure his release. As Afghanistan faces a major economic crisis, the Taliban’s survival may depend upon the support of drug lords like Noorzai, who run criminal enterprises worth billions of dollars.

The Interpol has raised an alarm and anti-narcotics agencies around the world, especially in South Asian countries like India, are on high alert after the Taliban takeover of Afghanistan. In its latest assessment of the impact of the Taliban’s return, the Interpol said the opium economy in Afghanistan could be pegged between $1.2 billion and $2.1 billion a year. The Taliban's share ranges between $100 million and $400 million, and could go as high as $1.5 billion.

“The Taliban's takeover and the departure of foreign military forces will likely result in a significant increase in the production and trafficking of both heroin and methamphetamine and with the Taliban now in control of all border crossings, there may be fewer barriers to smuggling drugs out of Afghanistan,” said the Interpol. This could lead to a significant influx of drugs into neighbouring countries and other global destinations, particularly Europe. An increase in supply is likely to drive prices down, making drugs more accessible to both habitual and new users.

Just like the warlords, the opium lords, too, have contributed to the Taliban’s return. The new government, therefore, is keen to bring back Noorzai, who used to be the group’s chief financier. Noorzai was arrested by the US Drug Enforcement Administration in 2005 in a covert operation and was sentenced to life imprisonment in 2009. His release was said to be among the key issues that figured in the discussions between the US and the Taliban delegation in Doha, prior to American withdrawal from Afghanistan.

There is speculation that the US is considering a swap deal with the Taliban to secure the release of American contractor Mark Frerichs, who was abducted in January 2020 from the Khost province in Afghanistan by the Haqqani network. His family and friends are putting pressure on the Biden administration to bring him home. “Even though there are no troops on the ground, the US is still engaging the Taliban and the release of the Afghan drug lord from custody is a key issue,” said a senior intelligence official.

President Joe Biden does not want to leave any American behind in Afghanistan, and the Taliban is reluctant to leave any of its key men, especially the prized drug lords, in US jails. According to intelligence reports, many small-time drug lords who were in Afghan jails have already been freed by the Taliban.

Noorzai, believed to be in his early 60s, is also politically important for the Taliban. He is a key leader of the Nurzai, a large landowning Pashtun tribe in the Greater Kandahar region. It is from here that Mullah Omar launched the first Taliban offensives in the 1990s. Noorzai helped sponsor some of his biggest operations, which brought him close to the Taliban supremo.

The “symbiotic relationship” between Noorzai and the Taliban was spelt out by prosecuting attorney David Kelley in April 2005, following Noorzai’s arrest. “Between 1990 and 2004, Noorzai and his organisation provided demolitions, weaponry and militia manpower to the Taliban,” Kelley said. “In exchange, the Taliban permitted Noorzai's business to flourish and also served as protection for his opium crops, heroin laboratories and drug transportation routes out of the country.” The new regime in Kabul has not forgotten the contribution of Noorzai and other drug lords in helping create the world's biggest opium empire, placing it at the apex of the Golden Crescent, comprising Afghanistan, Pakistan and Iran.

The appointment of Gul Agha Ishakzai as finance minister points to the fact that drugs, money and weapons—in that order—have played a major role in sustaining the Taliban and bringing it back to power. Ishakzai's proximity to the opium lords raises a red flag among narcotics control bureaus in South Asia, which fear that drug trade will be a key pillar in the economy of the newly formed Islamic Emirate. Taliban spokesperson Zabihullah Mujahid, however, said contraband would be banned in Afghanistan. 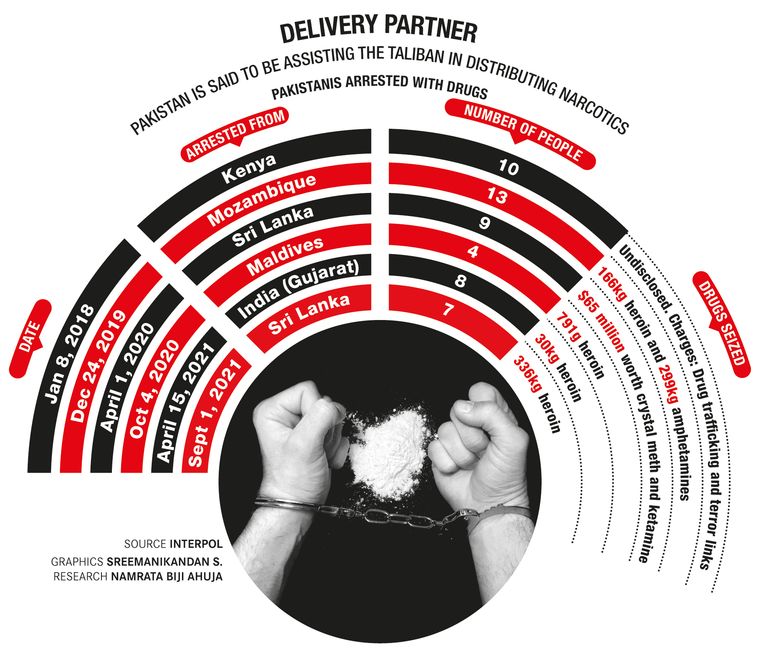 Speaking to THE WEEK, S.N. Pradhan, director general of India’s Narcotics Control Bureau, said, “The Taliban 2.0 is making the right noises as far the drug problem is concerned, but how much of it is implemented remains to be seen.” He said the Taliban had banned opium production back in 2000 and it came down drastically, before it picked up again. “So, it can happen again. We hope the Taliban remains true to its word. But it remains to be seen whether drug lords will come out in the open and the Taliban will be able to regulate the entire system,'' he said.

Yet, the Taliban’s links to the drugs and money-laundering networks are worrying. Ishakzai is close to Quetta-born Taliban financier Ahmed Shah Noorzai Obaidullah, whose name figures prominently on the UN sanctions list. According to the UN, Ahmed Shah owns and operates Roshan Money Exchange, an enterprise with multiple branches across Afghanistan and Balochistan, used for arranging funds to support the Taliban’s military operations and narcotics trade. He has been accused of providing services to Ishakzai and other Taliban leaders in Helmand province.

In late 2011, Ishakzai, who then headed the Taliban Finance Commission, instructed Ahmed Shah to deposit millions of dollars in Roshan Money Exchange for the Taliban, as per reports of the UN Security Council.

Some of the other drug lords who cooperate with the Taliban include hawala operator Musa Kalim, a Pakistani national placed on the American sanctions list on November 20, 2012, for narcotics trade in the Golden Crescent.

Another key opium trader is Mohammed Qasim Mir Wali Khudai Rahim, who was placed on the UN sanctions list for supplying weapons to the Taliban. Helmand born Qasim is the owner of Rahat Trading Company, which is used by the Taliban for channelling funds from external donors and drug trade. Within Afghanistan, meanwhile, there is growing worry about the emerging economic crisis driving more youth to the drug industry.

As per the 2018 report of the United Nations Office on Drugs and Crime, there has been a 37 per cent increase in opium production in Afghanistan, while the production in Myanmar—a key player in the Golden Triangle it forms along with Laos and Thailand—came down by 25 per cent. Afghanistan now contributes more than 83 per cent of the global opium supply.

Unfortunately for India, significant quantities of these drugs are making their way here, both in transit to global markets and also as a final destination. On September 20, the Directorate of Revenue Intelligence (DRI) seized nearly 3,000kg of narcotics worth Rs21,000 crore at the Mundra port in Gujarat. It came in two containers from the Bandar Abbas port in Iran, but DRI officials believe that the original source of the drugs was Afghanistan.

Intelligence reports show that drug seizures have come down along the Balkan and Central Asian routes since 2016, indicating stricter enforcement by anti-drug agencies in the region. The only available alternate route is via the Indian subcontinent. Tonnes of opium produced in Afghanistan are smuggled into the western borders of Pakistan in 100kg-200kg packets and then reassembled into bigger consignments by gangs in Lahore and Faisalabad, before being sent to Karachi and Gwadar for further transportation through fishing vessels in the Makran coast. In many drug seizures in 2019 and 2020, it was noticed that packing covers were of some popular brands of oats and atta in Pakistan, said an Indian customs official.

“Pakistan acts as an intermediary and assists the Taliban in distributing the drugs all over the world, as far as the west and Africa,” said Prateek Joshi, a foreign policy researcher at Oxford University. Pakistan takes advantage of the 2,500km-long porous border it shares with Afghanistan and also its 1,062km-long coastline on the Arabian Sea to promote drug trade.

K. Srinivasan, retired inspector general of police (intelligence) who was with the BSF and CRPF, said that once the interim government in Kabul became steady, the focus of Pakistan and the Taliban would be on Indian border states. “They will look at Punjab, Gujarat, Rajasthan and Jammu and Kashmir for narcotics smuggling. Infiltration is also expected to increase,” said Srinivasan. The latest DRI seizure, however, has shown that this may already be happening. Between 2017 and 2020, as many as 38 Afghan nationals were arrested by Indian agencies for drug trafficking.

Unlike terror outfits, drug smugglers never rely on a single route. “Apart from land, air and sea routes, the latest trend is the use of drones, which we have already seen in Punjab and Jammu and Kashmir,” said a former director general of the National Investigation Agency. He said drugs were being smuggled from Pakistan through Indian waters along the western coast of Gujarat and Maharashtra and also through land routes to local suppliers in Jammu and Kashmir, and Punjab.

Srinivasan said the ISI was targeting the Kashmiri youth with drugs, just like it did in Punjab. At the same time, terror groups active in these states use drugs and money to entice new recruits. There are more than half a dozen cases at various stages of investigation linked to Pakistani terrorist groups like the Jaish-e-Mohammed and Lashkar-e-Taiba and Khalistani outfits like the Khalistan Liberation Force (KLF).

Khalistani terrorists in Germany like Gurmeet Singh Bagga are moving to narco terror from regular armed infiltrations. The NIA filed a chargesheet in December 2020 against narco-terrorist Dharminder Singh in which the agency exposed the role of Pakistan-based KLF chief Harmeet Singh and Dubai-based drug smuggler Jasmeet Singh Hakimzada in running a network of drug traffickers across Delhi, Punjab and Dubai.

Involvement of Pakistani gangs was also noticed in the seizure of 532kg heroin at Attari in June 2019. The consignment was bound for Jammu and Kashmir, with its mastermind Farooq Lone sitting in Lahore. Investigation of drug cases in Jammu and Kashmir in the past one year indicates that more than 30 per cent of the narcotics came from Pakistan.

The Taliban’s return has, meanwhile, started dominating political debates in border states like Punjab and Gujarat, which will have assembly elections next year. The Congress has demanded an exhaustive investigation into recent DRI seizures.

Former Punjab chief minister Amarinder Singh said heroin was being smuggled into Punjab from Afghanistan via Pakistan, hurting the state’s youth and even preventing them from joining the armed forces. A senior officer of the Punjab Police said the Taliban-Pakistan-Khalistan network was a potent threat and pointed to the danger of Khalistani groups in the US, the UK, Canada, Germany and Australia getting further active in drug trade.

A section of the Indian security establishment, however, believes that drug trade out of Afghanistan is not going to change drastically because of the Taliban’s return as the group never abandoned it even when it was out of power. “Opium production in Afghanistan never declined and Indian and foreign agencies have been making regular seizures,” said Sanjay Kumar Singh, deputy director general of the NCB. “It shows that drug trade and trafficking remain the same, irrespective of the Taliban being in power or not. From covert support, it may just become more overt.”