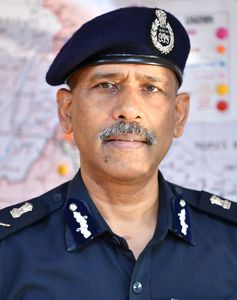 Prime Minister Narendra Modi's visit to the United States was focused on strategising and collaborating in the Asia-Pacific region. A key pillar in this collaborative effort is the joint war on narcotics trade and terror, which is posing a global security challenge following the Taliban’s takeover of Afghanistan.

According to the 2021 World Drug Report by the United Nations Office on Drugs and Crime, Afghanistan continues to be the largest producer of opium. In an exclusive interview with THE WEEK, Narcotics Control Bureau (NCB) chief S.N. Pradhan says that India is going to play a critical role in a common strategy to counter the narcotics menace.Excerpts:

Afghanistan is said to be the producer of 83 per cent of the world's opium. How big is the threat with the Taliban's takeover?

I think it is an established fact that Afghanistan is the majority producer of opium in the world. The problem from India's perspective is that it is a country facing the problem of being the source, the user and the transit country. Because of India's sheer size in terms of geography and population, it becomes a natural attraction point for traders and suppliers.

With the Taliban taking over, there are apprehensions building up because of the sheer volume and weight of production. It has to go somewhere. On the plus side, there is the statement made by the Taliban that they are not going to allow it to happen. So, if the Taliban government is to be believed, there is hope and we would like to believe they are going to be true to their word.

But if we look at the weight of production and the volume of opium Afghanistan comes up with every year, there are concerns. In 2020, there was a growth of 37 per cent [from the previous year]. So, the fact is that the production and cultivation of opium has not come down.

More than two lakh hectares [of opium] is cultivated in almost 22 of 34 provinces of Afghanistan. And this is only opium. I am not talking about other drugs like cannabis and cannabinoids. The recent hauls made by the NCB or DRI [Directorate of Revenue Intelligence] in 2020 and 2021, including the recent Mundra port seizure in Gujarat, have connections to Afghanistan. So, it is a matter of serious concern and that is why India needs to be very wary.

The Taliban drug lords are on the UN sanctions list. Are there apprehensions of them having a free run now?

I cannot say if the drug lords will operate openly, because the Taliban has been conventionally restrictive talking about drugs. Taliban 2.0 is making the right noises as far as the drug menace is concerned. But how much of it will be implemented remains to be seen. The Taliban should ban production of opium. In 2000, they had banned it and suddenly the production came down to 10 per cent of what it was earlier. The drop was from 80,000 hectares to 8,000 hectares. So let us hope it will happen again. It remains to be seen whether the drug lords will come out in the open or whether the Taliban will regulate the whole system.

What are the new routes of opium smuggling into the country?

In the last five to ten years, the whole system of drug supply has morphed out of recognition. In recent days, the NCB is investigating drug trade using the dark net. There is also the use of vessel containers as seen in the massive haul of heroin at Mundra recently. There have been seizures along the western coast, which is mainly Nhava Sheva Port, JNPT in Mumbai and other ports down south.

There is also the use of traditional routes like land, air and postal couriers. So, every route which is a possible conduit is being used. Therefore, it is a war for the NCB and other agencies fighting drug menace. It is a multi-front war where every front seems to be open and thriving.

The kind of innovative tricks drug smugglers and traffickers are using is amazing. It is not just the routes, but the fronts that are being used to cover the drug trade that are shocking. In the last month, we apprehended a couple of [people working with] NGOs, based out of Delhi and Bihar, that were working with local institutions and acted as fronts for movement of LSD patches.

So, if the drug traffickers fail in one route or if it is more monitored, they move on to another. Since all options are open, it becomes that much difficult for the agencies to control and monitor the transactions. Which is why there is a greater need for all agencies to combine their expertise and resources.

How big is drug consumption in India?

There is a real drug usage problem in the country. The Union social justice ministry has pointed out that drug abuse is expanding. The numbers are mind-boggling. As much as 2 per cent of the population, which is approximately three crore people, is using opioids. More than two per cent use cannabinoids. If we combine it, around 5 to 6 per cent of the population is using drugs. These are huge numbers.

How do you see the role of Pakistan and the Haqqani network, which is accused of financing terror or targeting youth in Jammu and Kashmir and Punjab?

I think it is both—the terror angle and the social disruption that can be caused with the use of drugs. The aim is to disturb the social fabric in border-states and this strategy works for all the enemies of the country. I would not like to comment on the policy of the new regime in Afghanistan or Pakistan's actions. Some of these things are out in the open. As far as the NCB is concerned, we are watching all developments with a microscope. What happened at Mundra port is not a good sign at all. And, if it has its origins in the Taliban coming to power, it is even more worrisome. We are hoping it does not, but if it does, it will be the worst fears coming true.

How is the NCB preparing to counter the threat?

We are working out a strategy at the highest levels of the government to prepare for a post-Taliban scenario as they return to power. There is serious thinking and strategising to beat the drug menace and all the agencies like the NCB, DRI and others are monitoring drug movement and trade. We cannot bank on the possibility that things will get better, so we should be prepared for the worst.

After the Taliban came to power, what progress has India made in these interactions?

I have personally had interactions with six countries in the last one month itself, and more [are] in the pipeline. So, the aim is to plan together, work together and operate together.