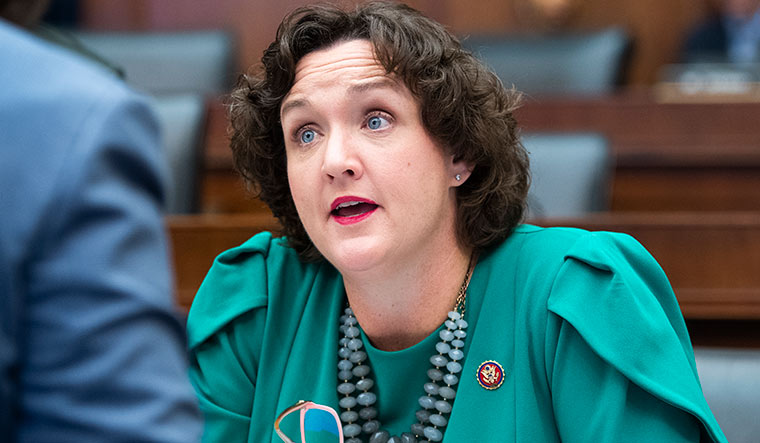 Pushing for progress: As a member of the house committee on oversight and reforms, Porter has been driving political reforms | Getty Images

A rising star of the Democratic party, Porter has Capitol Hill abuzz. In fact, that has been the case since 2018, when she shocked America by becoming the first Democrat to win California’s 45th congressional district, created in 1983. Porter’s razor-sharp politics makes her a serious contender for the senate seat that Kamala Harris would vacate if she becomes vice president. Porter is open to the idea, but she has more pressing issues on her mind. Taking down the Trump presidency, for instance.

Her rockstar image strengthened in April this year, when she raised $4.6 million—30 times more than her opponent Greg Raths of the Republican party did. Recognising her star power, the Democratic party has enlisted her help in its ‘Red to BOLD’ campaign, aimed at flipping seven Republican seats in Nebraska, Texas, New York, Michigan and Florida. “To achieve big change, I need more allies in Congress. And I’m asking for your help to make it happen,” Porter says in her fundraising emails.

As she winds down a virtual ballot party attended by THE WEEK, she reaches for a dry erase marker. “If you have any doubt about whether it is worth it for you to vote in this election,” she tells the audience, “I brought the whiteboard and here are some of the reasons. Climate change. Let me break it down for you. Do we all want to die? No. So vote.

As she reels off other reasons—health care, women’s reproductive freedom, criminal justice reform—one begins to see President Katie Porter as a distinct possibility in the future. She furiously scribbles “Will you vote?” on the whiteboard, and issues a sober reminder: “Your voice is your vote. It is not enough to write things on Twitter.”

As she waits for the fruits of the Red to BOLD campaign, Porter continues to pore over legislative work, hold people in power accountable and, of course, raise her three kids. Divorced, Porter is the only single mom in the US Congress. She splits her time between Washington, DC, and Irvine, California, where her three young children go to school. Every weekend, the minivan-driving supermom heads back to Irvine, does her chores, and volunteers with her children’s Cub and Boy Scout troops.

When the pandemic hit and Congress permitted votes by proxy, she stayed in Irvine, home-schooling the children, holding virtual events, distributing cleaning supplies to childcare workers, and even finding time to donate blood. Committed to being a voice for working mothers like her, Porter tweeted on September 17: “Despite current protections in the law, pregnancy discrimination continues to burden working women and their families. I’m glad the House today passed the Pregnant Workers Fairness Act, and I’m eager for my colleagues in the Senate to take it up.” 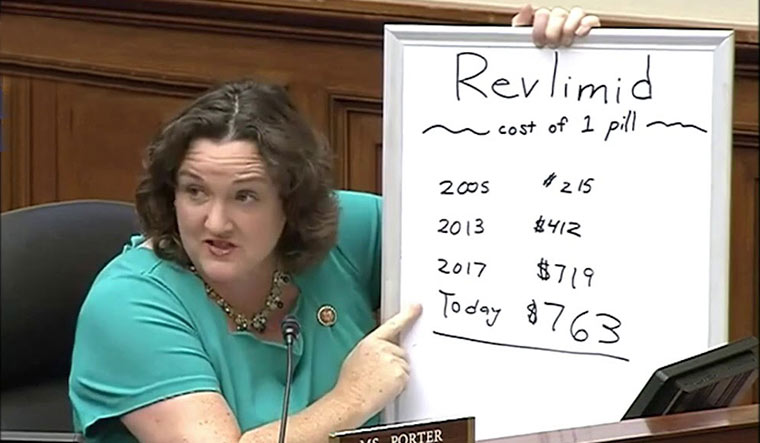 Ironically, Porter took the political plunge thanks to Trump. After Trump’s shocking victory in 2016, she had brunch with her mentor and senator Elizabeth Warren. She told Warren about her three possible career ideas. Warren said the first was terrible and the second, forgettable. The third idea—which was to run for Congress—had Warren saying: “Now that is a good one.”

The younger generation of voters love “Katie’s spunk”. Members of the Katie Porter fandom include young adults sporting ‘No BS’ tee shirts, Halloween revellers dressing up as ‘Katie’s Whiteboard’, and young mothers pointing her out to their children saying, “That’s your future president.”

“I feel she respects the intelligence of the voter, keeps it real, shows integrity and truly walks her talk,” says techie Rekha Kaul of Irvine. “I looked up her record; she has sponsored and cosponsored close to 470 bills in 2019-2020 alone.”

Kaul’s views are validated by the Asian American Action Fund, a political action committee that decided to endorse Porter’s 2020 reelection bid as early as July last year. Porter’s success in flipping Orange County, a Republican stronghold that encompasses her congressional district, and her initiatives for ensuring the rights of immigrants led to the decision. Asians, including Indian Americans, make up 21 per cent of the population in Orange County. One of her fans there is MBA student Amit Vashist, who describes Porter’s tenacious questioning in Congress as “cogent, firm and supremely practical”.

Two mentors helped Porter hone her questioning skills—the trailblazing senators Warren and Kamala Harris. After attending Yale University and getting a law degree from Harvard, Porter specialised in bankruptcy and consumer protection law at Warren’s instance. Porter’s decision to accept a teaching job at the University of California Irvine prompted Harris, then the state’s attorney general, to appoint her as California’s independent monitor of banks. Both opportunities eventually helped her run for public office.

Today, when the whiteboard and dry erase marker come out, members of Congress know Porter is about to school someone. Her most famous whiteboard takedown resulted in Robert Redfield, the head of the Centers for Disease Control and Prevention, committing to free Covid-19 tests for all Americans. In October, she chastened Mark Alles, CEO of the pharma company Celgene, for landing $500,000 as bonus in two years, “just by tripling the price of [the cancer drug] Revlimid”.

In a video that went viral, Porter asks Alles after scribbling ‘$13 million’ on her whiteboard: “Do you know what this number is? Does it ring any bells?”

“I think you’re referring to my compensation in some way,” says Alles.

“This was your compensation for 2017 for being CEO of Celgene. It’s 200 times the average American’s income,” says Porter. “Any increase in the price of Revlimid would also increase your bonus [because it] increases [the company’s] earnings. Isn’t that right, Mr Alles?”

Before her showdown with Alles, she had castigated Jamie Dimon, chairman and CEO of JPMorgan Chase, over the pay disparity in the company. She demanded that he explain how a bank teller could live on minimum wage. Even Mark Zuckerberg has been at the receiving end of her ‘no-BS’ stance. Porter dared the Facebook CEO to commit “to spending one hour a day” for a year working as a content moderator. The commitment would involve sticking to the regimen of Facebook’s 15,000-odd moderators—policing stabbings, suicides and other gruesome videos on the social media platform for long hours, taking only nine-minute supervised “wellness breaks”. Zuckerberg declined.

However, it was Porter’s decision last year to sign, along with 14 other members of Congress, a letter urging India to restore communications in Kashmir that had Indians and Indian Americans taking notice. On August 5 this year, Porter tweeted against the lockdown. “Today marks one year since India’s crackdown on Jammu and Kashmir. Millions remain cut off from phone and internet, the local economy is in ruins, and political prisoners are in custody without charges. It’s time for the lockdown to end.”

In Congress, Porter wants to overturn Trump’s tax plan, which raised taxes on middle-class families. She opposes the US-Mexico border wall, supports “immigration reform that will provide a fair path to citizenship for undocumented immigrants”, and is keen to break the chokehold of big money on American politics.

Her quibbles about life as a congresswoman reveals how Capitol Hill remains “a male institution”. The furniture is too big for women—her feet do not touch the floor when she sits—and the congressional lapel pin that distinguishes members from staffers and visitors is more suited for men’s suits.

Porter, however, does have two tools that have served her well in Washington—her ‘no BS’ attitude and her whiteboard. If the Democrats win big in the elections to the US Congress in November, an upgrade from congresswoman to senator could well be on the cards for her.