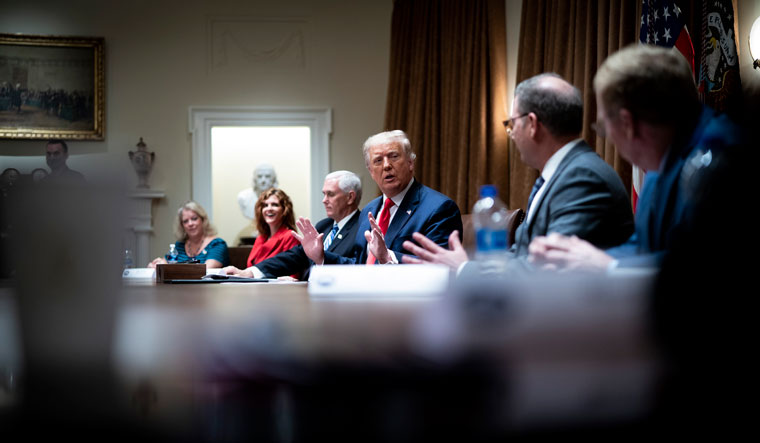 The Covid-19 pandemic has dealt a nasty blow to all those who have been waiting patiently to enter the United States legally. Citing the pandemic, President Donald Trump has shut down most immigrant and work visa programmes till the end of the year, pulling the rug from under the feet of those waiting for their green cards and H-1B visas.

Green cards are now being issued only to physicians, nurses and health care workers and their families. It, however, leaves the door open for the EB-5 immigrant investor programme. The freeze on green card applications—initially for 60 days—has been extended for the whole of 2020. The administration has also stopped issuing H-1B, H-2B, H-4, L and J visas during this period.

In early July, the Trump administration came up with yet another restriction, banning foreign students from entering or remaining in the US if their academic programmes were fully online. Many colleges and universities have moved their courses online because of the pandemic. Trump’s order was challenged immediately in court by prominent institutions like Harvard University and Massachusetts Institute of Technology as “arbitrary and capricious”. The administration backtracked quickly and agreed to allow existing students to continue their studies. The ban, however, remains applicable to fresh international students.

With presidential elections coming up in less than three months, Trump seems to have gone into an overdrive on the immigration front. In yet another move targeting foreign workers, he has banned federal agencies from employing foreign workers on H-1B visas and has put restrictions on H-1B workers moving to other employers’ job sites. The administration has also hiked application fees for H-1B and L-1 visas.

Indians will be among the hardest hit by the newly imposed visa and immigration restrictions. The blanket freeze on green cards and job visas has come as a big shock for those who were scheduled to get their visas, says New York-based immigration lawyer Cyrus Mehta. “If they have been sponsored by employers through the labour certification process and they happen to be overseas, then they, too, will be impacted by the order,” he says.

In an opinion piece in The Hill, journalist and attorney Raul Reyes says Trump’s latest move is little more than a calculated political stunt. “It is designed to stoke anti-immigrant sentiment and to distract the public from the administration’s myriad failures in dealing with the coronavirus crisis,” he says.

The new restrictions have thrown several families already in the US into a whirlpool, as immigration and the pandemic have combined to form a potent mix. Millions have lost their jobs in the US and so the H-1B workers are not immune; but unlike American workers, if they do not find a job within 60 days, they will have to leave the country.

Tahmina Watson of Watson Immigration Law in Seattle says the Trump administration is using Covid-19 as a vehicle to achieve its anti-immigration objectives like banning most family-based immigrant visas. “It is not a secret that this administration does not like H-1B visas. Covid-19 and the onset of recession provided the perfect opportunity for the administration.”

Meanwhile, the Democratic Party has promised a major overhaul of the Trump administration’s immigration agenda, if its candidate Joe Biden wins the presidential elections in November. “We support awarding visas for permanent, employment-based immigration in a way that is responsive to labour market needs,” says the party’s campaign agenda. With Trump and Biden having sharply divergent views on the issue, the debate on immigration is likely to become more acrimonious.

The Trump administration, meanwhile, is considering a proposal to require companies to pay foreign-born scientists and engineers in H-1B status a minimum wage of $1,50,000 to $2,50,000 or more a year. “The law enacted by Congress does not limit the issuance of H-1B visas to those earning such high salaries. This proposal would be subject to court challenges,” says Mehta.

Watson says the regulations are set on this issue through the Code of Federal Regulations. To change the rules, new regulations have to be drafted, proposed and finalised and the public will have an opportunity to comment on any proposed rules. “A standard high salary will lead to economic failure for companies that hire high-skilled foreign workers. It will lead to economic hardship for businesses just when the economy needs all the help possible to recover,” says Watson.

There are, however, some signs of cheer in the prevailing gloom. “Federal courts have reversed arbitrary H-1B denials,” says Mehta. “One court also held that the policy of requiring extensive documentation with third party clients was unlawful. This should improve the prospects of H-1B requests filed on behalf of IT professionals from India who are assigned to their party client sites.”

Meanwhile, it is wait and watch for those almost on the finish line for green cards. Gautam (name changed) who is in Seattle on an H-1B visa lost his job. With 18 days left on his visa, he debated whether to get a tourist visa so he could stay on to take care of unfinished business. At the same time, he also tried hard to get a consultancy job that would take care of his visa issues. He got a job despite the hiring freezes. “On the day my visa was expiring, I got the news that my new visa application was filed,” he says. “Within two weeks my visa was approved.”

One cannot predict what the future holds for those waiting to enter America, but there may be a silver lining to the Covid-19-induced crisis.

“India’s high-skilled workers are sought after globally,” says Watson. “As we enter an era of remote work for the technology industry, countries will compete for talent. I don’t necessarily worry about my clients making a living outside the US. My concern would be for the status of America as a global leader if we lose the talent that gives us the edge.”

­—The author is a New York-based journalist who blogs at Lassi with Lavina.