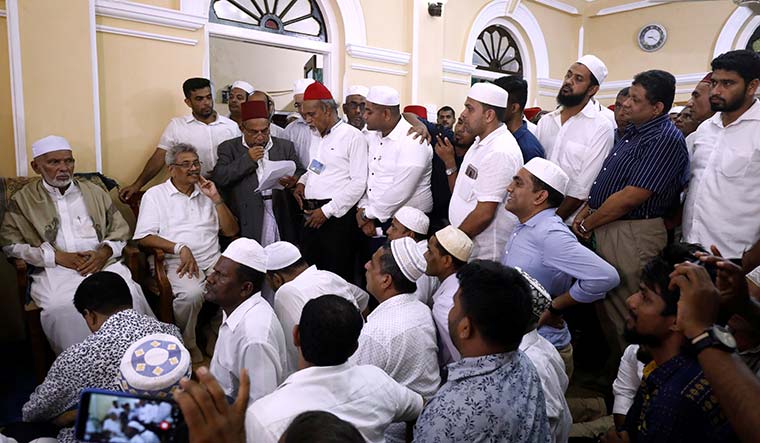 SATURDAY, NOVEMBER 16, began on a high for people of north Jaffna. There were long queues at polling booths, as even the elderly braved the heavy afternoon showers to vote for the 7th executive president of Sri Lanka. Steven Leonard, a businessman, was sure, like many others in the north, that United National Party (UNP)’s Sajith Premadasa would become president. “It is a sure victory because we Tamils have fully put our strength behind Sajith,” said Leonard.

Early next morning, however, the tension in the air was palpable. The Thirunelveli vegetable market, about 5km from Jaffna town, had traders and customers glued to their pocket radios. By 9am, gloom had settled in and around Jaffna. “He is winning all the Sinhala districts,” wailed a mournful trader. It was clear that he was referring to Gotabaya Rajapaksa, the former defence secretary and one of the two top contenders—the other being Premadasa. He was fielded by the Sri Lanka Podujana Peramuna (SLPP), which is led by his brother, former president Mahinda Rajapaksa.

By 10am, it was clear that Gotabaya Rajapaksa was going to be the new president. By afternoon, shocked northeastern citizens learnt that Premadasa had lost even Colombo and Kandy, two UNP strongholds. By evening, the roads of Jaffna were deserted as the north pondered over its future.

“In post-independent Sri Lanka, this is one of the elections in which the Tamil people were keenest to vote,” says Jaffna’s A.N. Rajendran, who was secretary of former Northern Chief Minister C.V. Vigneswaran. Rajendran has since joined a faction of the Tamil National Alliance (TNA) that agreed to cooperate with the UNP for this election. Rajendran noted that both the main candidates failed the Tamil people, but feels that Tamils had no choice but to trust Premadasa.

“We are not asking for federalism,” said Rajendran. “We want an effective way of sharing power within a united country. But in Sri Lanka, establishing the rights of Tamils is a political issue.” Rajendran acknowledges that the ultra radical view held by some Tamil politicians prevented further discussions with the former Rajapaksa regime.

The northern Tamils voting en masse for Premadasa is significant because there were calls from diverse segments of the community to boycott the elections. Vigneswaran’s Tamil People’s Alliance (TPA), had, along with four other parties, teamed up with a section of Jaffna University students to put forward 13 demands before the two main presidential candidates as conditions for supporting them. The conditions included the release of LTTE prisoners held for terrorism. Neither of them responded to the demands. Soon after Rajapaksa’s victory, Vigneswaran reiterated the call for self determination of the Lankan Tamils, even as he issued a statement congratulating the winner. He noted that this election had divided the country into “water-tight communal compartments”.

One Tamil, who holds a dual citizenship and is based in Europe, had come to Jaffna to vote. Preferring to remain anonymous, he expressed disappointment that the diaspora’s call for Lankan Tamils to vote for Premadasa did not reap expected results. However, he too, like many Tamils and Muslims, expressed fresh hope that Rajapaksa would usher in equality for all Sri Lankans.

By midweek, a distinct change had taken over and the fear to express opinion—a phenomenon that existed prior to January 2015—resurfaced. More than half of the Tamils in the north that THE WEEK contacted refused to speak even anonymously. A few took to Twitter, posting carefully worded messages about peaceful coexistence.

Although the main visible support by Tamils and Muslims was for Premadasa, there are few who spell out an alternative view. One such person is Sentitcumaran Ramalingam, a Tamil lawyer from Jaffna, now in Colombo. He feels that the fear of the new president is largely unfounded. “The context in which Rajapaksa operated as defence secretary and is accused of alleged crimes was a war situation where the LTTE had adopted ruthless methods,” said Ramalingam. He points out that 12,000 former LTTE cadres were rehabilitated under the Rajapaksa regime from 2010 to 2014.

In the east, which is inhabited by both Muslims and Tamils, the voting pattern favoured Premadasa, although, in the rest of the country, some sections of Muslims did vote for Rajapaksa. Ali Sabry, Rajapaksa’s attorney, was lobbying heavily to woo the Muslims back. The alienation of Muslims came after the anti-Muslim riots of 2014, and was furthered by the Easter Sunday attack, carried out by nine Muslims, that left nearly 300 dead.

“In this election, the whole idea of national security was predominant. The SLPP candidate contested entirely on a national security-based pledge. It also seems that the Sinhala people felt that they could depend on themselves to have a government totally elected by them,” said Muslim human rights activist Jezima Ismail. “We should give him (Rajapaksa) the chance to prove himself. The reconciliation process should continue so that we can... continue the energetic engagement of pluralism.”

The Muslims, like the Tamils, had the chance to vote for a Muslim candidate, but the votes polled were insignificant. Controversial former Eastern Province governor M.L.A.M. Hizbullah had contested but failed to get noticeable support from Muslims in the east.