Rise of the demagogues

EU and migrants are the major targets of Europe's rightwing strongmen 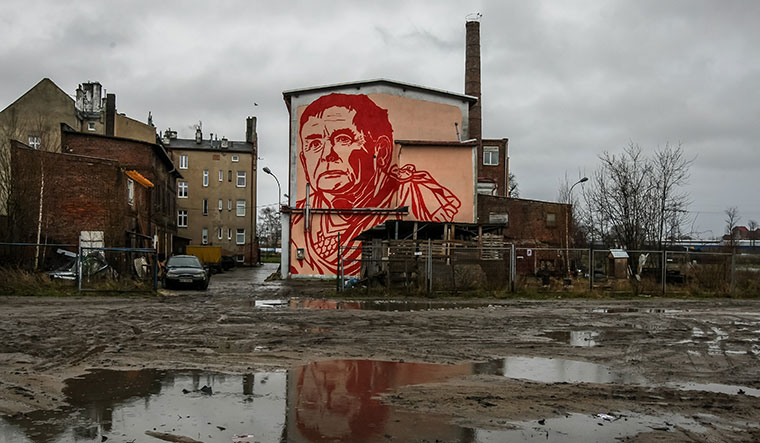 DEATH AND RESURRECTION. One twin dies, the other is reborn. On a bleak, wintry day eight years ago, former Polish prime minister Jarosław Kaczyński visited the air crash site where his beloved identical twin Lech, Poland’s serving president, was killed. People wept, but stone-faced Kaczyński shed not a tear—at least not in public.

Poland’s political power-pair were soulmates, phoning each other a dozen times every day. Kaczyński refused to speak to the condoling Russian president Vladimir Putin. He suspected his brother was assassinated. A grieving Kaczyński stood strong and patriotic. A forceful national populist in the European Union was born. Zbigniew Mikolejko, philosopher of religion at the Polish Academy of Sciences, describes Jarosław Kaczyński as the “Chosen One”.

A trailblazing archetype, Kaczyński emblazons all the traits that subsequent EU strongmen would typify—a right-wing demagogue defending conservative, traditional Christian values, nationalist, populist, Eurosceptic and anti-migrant; driven by a “messiah” complex to save people from foreign meddlers and their own corrupt elite.

This new “ism” called “national populism” is sweeping across Europe and the United States. Explains Matthew Goodwin, professor of politics and international relations at the University of Kent: “National populist movements provide political expression for the fears and frustrations of ordinary people, who feel excluded from mainstream politics, who are anxious about rapid societal, demographic and economic change.”

Like all EU populists, Kaczyński is divisive. His supporters see him as a crusader of Polish independence and identity. His English-speaking, liberal opponents regard him outdated, dangerous, polarising, anti-Semitic, homophobic and xenophobic.

The EU strongmen are also seen as human rights violators, degrading democracy and perpetuating corruption to entrench themselves in power. To them, critics are traitors, dissent is subversive and opposition is anti-national.

The EU is trying to put out the various fires lit by the strongmen, but nowhere more than in Poland. Kaczyński is at loggerheads with the EU over his “judicial overhaul”, which the EU regards as unacceptable political interference in the judiciary, violating the bloc’s sacrosanct rule of law. The European Court of Justice ruled against Poland and the EU invoked its “nuclear option”—Article 7—which can culminate in Poland losing its EU voting rights and facing sanctions if all the other 27 EU members agree. 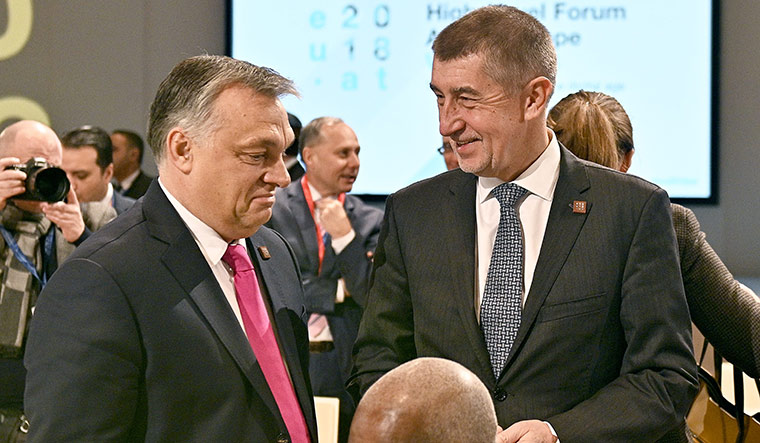 But another EU strongman, Hungarian Prime Minister Viktor Orbán has already confirmed he will veto this EU move. Orbán is in the same boat. His opponents call him “Viktator” and the European Commission president, Jean-Claude Juncker, once greeted him: “Hello, dictator”.

Orbán faces the EU’s ire for undermining the liberal media, judiciary, universities and NGOs. He is criticised for his “Stop Soros” law (targeting the Hungarian-American investor-philanthropist George Soros, who funds liberal causes). NGOs are not independent, accuses Orbán, they are “paid political activists who are attempting to enforce foreign interests… hordes of implacable human rights warriors who have an unquenchable thirst to lecture and accuse us.”

Many central and east European strongmen seem to carry the DNA of their former communist rulers. Yet, they have been winning elections all across Europe—in the Czech Republic, Slovakia and Romania.

But World Bank statistics show that corruption has increased in the past decade in Slovakia and the Czech Republic. The billionaire-turned-prime minister Andrej Babiš is under investigation for alleged fraud. Its president Miloš Zeman called journalists “manure” and “hyenas” who should be “liquidated”; his office claimed the last comment was a joke.

No journalist in Europe is likely to meet Jamal Khashoggi’s fate. Yet, disturbingly, journalists investigating corruption were assassinated in Slovakia and Malta. A beautiful young Bulgarian television reporter was brutally raped and murdered. Organised crime is entrenched in Bulgaria.

The EU takes the rise of strongmen seriously because it is a chilling reminder of the 1930s, when Adolf Hitler exploited people’s economic hardship with his ultranationalist, Jew-bashing demagoguery. “Enemies” are always strongmen’s oxygen. Says Michał Krzymowski, author of a Kaczyński biography, “There is one constant thing in his politics: he has always had to have a defined enemy, to unite his electorate, his voters around him.”

Now migrants replace Jews. Confined behind the iron curtain under Soviet rule during the Cold War, central and east European countries were closed to outsiders. Thus, they preserved an ethnic, cultural and religious homogeneity. So, when refugees inundated Europe in 2015 following German Chancellor Angela Merkel’s ill-fated open door policy, these citizens were aghast.

Populists stoked fear and prejudice. Refugees must be kept out, Kaczyński said, because they bring “disease and parasites”. Islamophobia thrives. In an interview with German newspaper Bild, Orbán said “We don’t see these people as Muslim refugees. We see them as Muslim invaders.” Barb-wiring his border to prevent “asylum-sneakers”, Orbán said, “Every single migrant poses a public security and terror risk… refugees bring gangs hunting down our women and daughters.” The refugee crisis fertilised far right movements across liberal Europe-Germany, France, Italy, Austria, the Netherlands and Sweden.

The EU is another “enemy”. Across Europe, there is frustration that the almighty “Brussels” (the headquarters of the EU bureaucracy) is robbing national sovereignty, enforcing rules, imposing hardship and “meddling” in political, economic and cultural matters. “Foreign” enemy is always a rallying issue, especially in countries that have been subjugated for centuries by the Austro-Hungarians, Prussians and then the Russians. Now the EU, which they belong to, is the powerful, dictating “outsider”.

Italy’s new coalition government comprising the far-right League and anti-establishment Five Star Movement is warring with the EU. Fulfiling its election manifesto, the coalition is hiking welfare spending, cutting taxes and lowering the retirement age. But the disciplinarian EU will not tolerate a rise in Italy’s deficit that impairs its ability to repay its gigantic debt. League leader and deputy prime minister Matteo Salvini attacked top EU officials as “the enemies of the happiness of Europe’s people”.

So, why are Europe’s people electing these populists? Some blame Russia’s hybrid warfare of cyberattacks, hacking, propaganda and planted fake news for the rise of anti-liberal movements. But Russia can only fish in troubled waters. Poisoning Europe’s waters from 2000 are the consequences of the dotcom bubble, the global financial crisis and then the Eurozone debt crisis. Voters across Europe saw governments bailing out the perpetrators of the crises—banks, big business and financiers—while punishing the ordinary people with austerity cuts and mass layoffs. The European socio-political contract—in place since the end of World War II—ruptured.

The biggest grievance in Europe is the stagnating standard of living. Most youngsters cannot match their parents’ lifestyle. Struggling with low pay and temporary jobs, they cannot afford to own a house or build up a pension. Deindustrialisation, outsourcing and economic stagnation resulted in job losses. Inequality widened between those who reaped the benefits of globalisation and those who felt “left behind”. Disparity between the city elites and countryside commoners grew.

Trust in mainstream politicians evaporated. People’s anger, sense of injustice and fear of the future channelled in four directions as they sought new political choices—extreme left, green, far right and anti-establishment parties. In Germany’s recent Bavarian election, the local ruling conservative party—the sister party of Merkel’s Christian Democratic Union—suffered big losses, to the gain of the Green and far-right AfD (Alternative for Germany) parties. British political theorist Margaret Canovan, who died in June this year, had said, “It can be argued that populism is good, it is a corrective, bringing ignored people and issues to the foreground.”

One leader who bucked the populist trend was the centrist Emmanuel Macron, who scored a spectacular victory in the French elections last year. His own break from the sclerotic mainstream parties was his allure. Yet, in one year, his popularity has sunk catastrophically to below 30 per cent because he is seen as pro-rich. Today, France is roiling under hundreds of riots and street protests, some of them violent.

Macron is an extremely eloquent anti-nationalist. His passion stems from the catastrophic consequences of Nazism. But the lessons of the world wars, Hitler and Soviet invasion were different for different countries. In Poland, the Czech Republic and Lithuania, nationalism spurred freedom struggles from foreign occupation. Observes American academic Walter Russell Mead, “Nationalism helped countries break out of the Soviet bloc and confirmed their belief that the cause of nationalism was the cause of freedom.” Today’s nationalists feel the multi-ethnic, elitist, bureaucratic and neo-imperial economic system benefits the internationalised rich at the expense of locals.

European nationalists have been legitimised and emboldened by Donald Trump, a self-proclaimed nationalist. His ally and former White House official Steve Bannon travels across Europe to strengthen national populism. Trump’s ambassador to Germany Richard Grenell provoked an uproar when he said that because of the failed socialist policies, he wants to “empower rightwing populists in Europe to rise up”. Disturbingly, the local police in countries like Germany and Italy have displayed extremism and racial bigotry.

In a famous 2014 speech, Orbán said a page had turned from 1989 when communism ended and Hungary adopted liberal values. “The new point of departure is the financial crisis,” he declared. This resonates powerfully, especially with the youth who are fearful of a jobless future.

European mainstream leaders despise the strongmen, calling them dangerous, impractical, lying rabble-rousers. Yet, these strongmen have also risen from the embers of public disappointment, frustration and suspicion. While they have successfully aroused emotions, these strongmen have not presented a credible economic alternative. Kaczyński is now being challenged by his polar opposite, Robert Biedron, mayor of Słupsk town. He is 42, gay, left-wing, atheist and pro-European.

Without doubt, national populism has taken root in Europe. Predicts professor Goodwin, “National populism is not a short-term protest. It is here to stay, it will be a permanent feature on our political landscape for a long time to come.” He is not talking of eternity, but national “messiahs” do have a habit of staying on. Asked what his political ambitions were in an interview a quarter of a century ago, Kaczyński proclaimed: “I would like to be the retired saviour of the nation.”