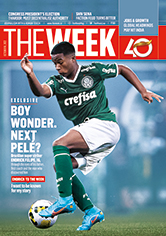 After reading about Endrick Felipe in THE WEEK, I feel he will go a long way and will continue to mesmerise football lovers across the world with his skills and power (‘The finisher’, October 16).

I hope that Endrick will keep his feet on the ground, and not let success change him, like it has changed so many stars. Your reporter said poverty has made Endrick mentally tougher, and I believe this is true. Hardships are painful, but there is always a silver lining.

THE WEEK is the only publication in the country that gives so much coverage to football. Here, I fondly remember all your major football packages in the past. Keep up the good work, and continue to stand apart from other news publications.

Your cover story made for an interesting read. I am not into football much, but I could not hold myself back from going through your cover story. What touched me the most is Endrick’s pointedness and humility.

I wish Endrick all success under the sun, and I shall pray that he remains grounded in spite of fame and money that comes along the way.

Every time the football World Cup approaches I start wondering why India is not playing in it. How many more years should we wait? At present, there is too much focus on cricket in the country. Football, any day, is a better game than cricket. It requires a lot of stamina to play football, and viewers worldwide enjoy the game more. And, results come quicker.

Is it possible for the Indian government to bring the likes of Endrick here, support them in every manner, cajole them into becoming Indian citizens, and make them play football for the country.

We have good ties with Brazil, and Prime Minister Narendra Modi can help us in this regard. He has the influence, respect and command required to do these things. Also, when it comes to football infrastructure, we are getting better. So, there is some hope.

Shashi Tharoor is a very capable politician. Today, many in the Congress are jealous of Tharoor, and that they do not like him is quite evident (‘An underdog can always spring a surprise’, October 16). Veteran Congress leader A.K. Antony was my senior in college, and Oommen Chandy and Vayalar Ravi were my classmates. So, it took me by surprise when I read that they were not supporting Tharoor. Ideally, these leaders should have backed Tharoor.

It is time young leaders of the Congress in south India stood firmly behind Tharoor.

If Tharoor becomes the Congress president, it is going to be the beginning of everything good for the Congress. I do not understand why majority leaders in the Congress are hesitant to choose an eloquent and articulate person as their president. Why is it only about their convenience and likings? Why are these leaders so jealous of Tharoor?

The onus is on the Congress veterans to ensure that the grand old party of Indian politics is not a diminishing force. These leaders need to move away and pave the way for younger leaders to rise to the leadership position.

General Anil Chauhan is a good choice as chief of defence staff (‘Right man, right time’, October 16). Chauhan’s vast experience in various defence sectors elevated him as the new CDS of India, a four-star general. I also feel this is a China-centric move. India is focused on threats from both China and Pakistan.

We can hope the new CDS will fill the vacuum left by the death of the previous CDS, General Bipin Rawat.

I agree with Shobhaa De that Aishwarya Rai looks graceful at 49, and she is a good actor (‘Let’s go beyond her beauty’, October 16). Like in Ponniyin Selvan: 1, in real life, too, Rai is a queen. She has come up with many notable performances in her career.

Like they say age is just a number, and I see no reason why Rai should not continue to enthral us in the same manner in her fifties and sixties.

Your cover package on Naveen Patnaik was a detailed one (‘Path of the empath’, October 9). When it comes to administrative experience and selfless service, there is nobody on a par with Patnaik, who has kept his flock together by serving people and not playing politics. When the rest of country faces problems, Patnaik solves his problems in his own way, without troubling the Centre. Like how Odisha, under Patnaik’s leadership, became the first state in India to have an early warning system in place for natural disasters.

Patnaik is also a man of few words, unlike many other politicians who talk a lot but do not perform.

People in Odisha are lucky to have such a capable leader as their chief minister—he is the only politician with a human touch. Wish we have many more Patnaiks in other parts of the country.

’Operation Lotus’ is working well for the BJP (‘Lure of the lotus’, Oct 2). I feel the next target is going to be Sachin Pilot from Rajasthan. By inducting Congress leaders, the BJP is giving a memo to the Congress that the BJP has a strong base in every state in the country.