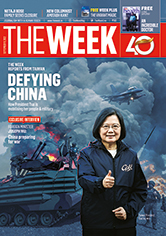 Your cover story on the Taiwanese crisis was timely and comprehensive (‘Fight against the mighty one’, September 11).

China, the big international bully, has been aggressive against Taiwan, India and the nations around the South China Sea.

To stand up to China, India needs to boost its economy. One big area where we are dependent on China is electronics. With the help of Taiwan, which is the unmatched leader of the global semiconductor, we could develop our electronic manufacturing sector.

Taiwan Foreign Minister Joseph Wu has indicated his country’s willingness to cooperate with India in semiconductor manufacturing. However, the problem is that we have not yet recognised the Democratic Republic of China, which is Taiwan. We should immediately rectify it as it will go a long way in getting help from Taiwan, which has so far been circumspect in its dealings with India.

Both India and Taiwan face threats from China, and it is about time India stood with Taiwan. India should be more vocal in calling out China. The problem with China is that it cannot be trusted. Right now, it remains the most hated country in the world. I pity the Chinese citizens who are not raising their voice against their government. They have been suppressed to a great extent.

Narendra Modi should invite Taiwan President Tsai Ing-wen as chief guest at the Republic Day parade next year. That will send a strong signal to China and the rest of the world. China will create a fuss, but India should ignore it.

‘Power Point’ (September 11) by Sachidananda Murthy was interesting. Murthy has vividly analysed K. Chandrashekar Rao’s plans of forging a non-BJP, non-Congress national front. But I feel any opposition unity is incomplete without the inclusion of the Congress.

All opposition-ruled states in south India, barring Telangana, have working relationships with the Union government. There could be conflicts between political parties at the time of elections, but once elections are over, there should be concerted coordination between the opposition-ruled states and the Central government for the overall development of the states and the nation.

Brooding on the questions regarding the mysterious death of Netaji Subhas Chandra Bose should end once and for all (‘Closure at last’, September 11). Bose’s death has been a political issue ever since independence, and the chances of manipulating it for political gains are high. The government should not mislead the public about Bose’s death. A DNA test of Bose’s ashes will establish the truth and put an end to all disputes.

On the losing side

If one group has the liberty to run award wapsi campaign because it suited their ideology, then the other group has the right to rundown Bollywood and Swara Bhasker (‘Bitter chocolate’, September 11). And they should not complain on the retaliation. Everyone is entitled to stick to their views. Ultimately, society will stand up for what is right. Right now the Swara Bhaskers are on the losing side.

In the defence services, an individual who errs in obeying specific instructions is punished irrespective of his rank. It is obvious that the person who was responsible for the security of the prime minister has not looked into the contingencies to be adopted when the PM travels by road (‘PMO Beat’, September 11). It is shameful that the officer did not provide the security ring and contingency plans despite clear instructions in the blue book.

I read THE WEEK on a daily basis as it is a great source of knowledge. It is well organised with a variety of articles. The picture quality is impressive and fascinating. Thank you.