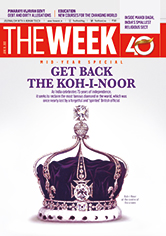 For us, Indians, the Koh-i-Noor is an emotive issue and not financially significant (‘Caged in the crown’, June 26). It has been inextricably linked to our history and will continue to hold a special place in all discussions on India’s cultural heritage.

The British government ought to repatriate the Koh-i-Noor as a gesture of goodwill, in atonement for historical wrongdoings.

I was delighted to go through the cover story on the Koh-i-Noor, the most famous (and infamous) precious diamond in the world, and India’s quest to get it back.

Many of our antiques, artefacts and heirlooms have been retrieved from various countries like the UK, Australia and the US under a restoration initiative by the Narendra Modi government.

It is good to know that India is trying to reclaim the most famous diamond in the world.

Your cover story on the Koh-i-Noor was informative. I have mentioned about the Koh-i-Noor in my book, India and Indian National Congress, which was published in Malayalam. This is what I said in the book:

In 1526, Babur defeated Ibrahim Lodi in the first battle of Panipat and established the Mughal empire in Delhi. Babur instructed his son, Humayun, to conquer Agra. Humayun defeated Vikramjith, a Rajput king of Agra. Vikramjith’s family attempted suicide to escape enemies. Humayun interfered and rescued them. As a token of their gratitude, the Rajput women gifted many priceless jewels to Humayun.

The Koh-i-Noor was part of that gift. This is how the diamond reached the Mughals. The British version of the Koh-i-Noor is a 19th century story.

Rather than dealing in speculations, a thorough media investigation is needed to unveil the truth.

Your cover story made for bad reading of a dead subject. Getting back the Koh-i-Noor, an overhyped gem, is a romantic narrative created by people for whom historical heritage does not make much sense. The diamond, which changed hands many times, never enjoyed paramount importance when it was with the Mughals till 1739.

Its origin story is half myth and half fact. Every time it changed hands, there was a gory event in the backdrop. Finally, Lord Dalhousie took it from Duleep Singh in a most uncivilised manner.

However, one should not forget that the diamond was taken by Duleep’s father, Ranjit Singh, through coercion—from a king who had sought refuge in his court.

If India has a claim on this diamond, then there are bound to be similar claims from other countries whose artefacts are displayed in our museums. How will we feel if Afghanistan demands all Gandhar artefacts to be returned? Or, if Pakistan demands all Indus archaeological artefacts to be shipped back? What if Nepal demands Charyapada, the first written text in Bengali language?

It is better to give up such an overhyped gem, which hardly represents India’s cultural heritage. Instead, India must reclaim the grand metal statue of Sultanganj Buddha, now displayed at a London museum. India must demand the marvellous piece of art, along with the Amaravati Marbles, as a token of gratitude.

A piece of Buddhist heritage means much more to Indians than a diamond owned by the Mughals.

George Santayana said, “Those who can’t remember the past are condemned to repeat it.” Undoubtedly, we can learn from history and prepare ourselves for the future (‘Let’s learn from history’, June 26). History is a neglected subject, which, if we know well, can help us find our way through the greatest crisis. However, if used at the wrong time to raise violent sentiments, it can lead to disasters.

History is like a knife—you can use it in the kitchen or use it to kill someone. It is up to us to use it properly.

I read with interest Shobhaa De’s column on superchef Suvir Saran (‘Detour’, June 26). To be a chef is a great experience. No two chefs will agree on the nuances of their profession; it is the consumer who rates their calibre. With De agreeing to have met a few obnoxious chefs, it is for certain that Saran is a chef with a difference and a humanitarian.

Annam Brahma, in Sanskrit, means food is god. So culinary art is divine in nature and practitioners like Saran are our unsung heroes.

It relieves me to learn that Saran survived a death scare. May he live long and his tribe increase.

These days the Central and State governments are out to destroy democracy for political gains (‘Powerpoint’, June 26). The only hope is the judiciary. It should rein back governments from misusing agencies like the CBI and ED.

Judiciary, in the past, distinguished between a convict in jail and a prisoner under trial.

The Supreme Court should not have declined the plea of Nationalist Congress Party MLAs—Nawab Malik and Anil Deshmukh—seeking temporary release from prison to vote in the Rajya Sabha elections. They should have been able to cast their votes under police protection.