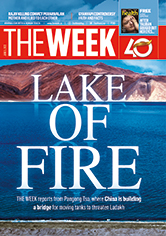 Though China is building a second bridge on Pangong Tso to threaten us in Ladakh, I am quite confident that the Indian Army is going to nip in the bud any misadventure, or aggression, on the part of the Chinese (‘A bridge too far’, June 5).

Having said that, there is nothing much that India can do to thwart the Chinese infrastructure upgrade on the territory under its control. But, as mentioned by Lt Gen (retd) Philip Campose, we need to deal with China from a position of strength. And the Chinese know those strengths well.

It was information to me that we have more personnel on the ground in the disputed area compared with the Chinese. We have a definite edge on Pangong Tso.

It is the travesty of geo-political complexities that such a beautiful lake has got the cognomen—Lake of Fire. Though India has maintained the aesthetic dimension of Pangong Tso, and kept it open for tourists, the Chinese have kept the region heavily militarised. That China is building new infrastructure in such a disputed territory shows its imperial frame of mind and complete disregard for territorial integrity, which it violates often through surgical slicing.

In the picture about the dragon’s intentions, the Indian Army is prepared to meet them at the other end of the bridge across the Lake of Fire.

After getting fully entrenched across the Line of Actual Control the ‘dragon’ is now trying to extend its fangs further through a fairly wider bridge, under construction, to move its heavy artillery. It necessitates constant vigil on the Indian side.

China is on its way to becoming the most powerful nation in the world. But it is always trying to intimidate its neighbours and other superpowers.

China is not an ideal superpower. In comparison, India is a soft power with a vibrant democracy. India’s cultural diversity unites it.

In Hindi, there is a saying—loha hi lohe ko katata hai, which means only an iron cuts an iron. Hence, we should deal with China with our heads held high and foil its evil intentions.

Why so much coverage?

You spent six pages on the Rajiv Gandhi assassination convict (A.G. Perarivalan) after his release from prison. You made him a national figure (‘Keeper of faith’, June 5)

While I appreciate the Supreme Court’s order to release Perarivalan after 30 years of incarceration, on humanitarian grounds, why should some political outfits celebrate his release from prison with crackers? Why should he get a hero’s welcome in Tamil Nadu?

Perarivalan should be left alone. Let him spend the rest of his life peacefully, regretting what he had done.

Why give so much publicity to Perarivalan? He is not as innocent as he claims to be. The offence he committed is quite serious—abetting the assassination of a much-loved leader and a former prime minister. Rajiv Gandhi was a progressive leader who had a good chance of becoming prime minister one more time, had he not been killed.

Had Rajiv been alive, India would have grown by leaps and bounds.

Your cover story was quite insightful with prominent personalities talking about their failures, success and life lessons learnt from their experiences (‘When lightning strikes’, May 29). All this proves there is no shortcut to success and failure is not the end of the road. Success is achieved when hard work meets the right opportunities. The most important thing to do is to learn from one’s mistakes.

Over the years I have come across so many good cover stories in THE WEEK. The cover story on life lessons of eminent people was unique.

If one goes deep into their lives it is apparent that 40-50 years ago they lived in a country that was laden with shortages. Those days have now disappeared.

Your cover story reminded me of the words of Thomas Edison: Genius is 99 per cent perspiration and one per cent inspiration.

Shashi Tharoor is only expressing the age-old viewpoint of the Congress (‘Last Word’, May 29). India was divided on religious lines by Muhammed Ali Jinnah out of the fear that Muslims, as minorities, would be made second-class citizens by Hindus. Jinnah died soon after. If he had lived longer he would have realised the fallacy of his fear.

When the Congress was governing the country, Muslims became first-class citizens and the Hindus got suppressed. The leaders of the Congress never recognised the sentiments of Hindus even when Lord Ram’s idol was installed at the Babri Masjid to symbolise the desire of Hindus that the historical wrongs committed by the barbarian Muslim rulers should be corrected.

With the help of the Left parties, the Congress had glorified barbarian Muslim rulers as heroes and suppressed the great Hindu rulers.

Why is Tharoor banging the “alarm” bells in Kashi? Tharoor has umpteen number of times spoken about British ruthlessly exploiting India, and sought rectification of the damage done. But in his column Tharoor talked about the BJP’s obsession with undoing the past. Why the double speak?