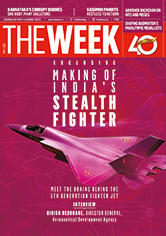 It feels great to know that India is building an advanced and lethal aircraft—a fifth generation stealth fighter (‘Enter, the AMCA’, May 1). Any country would love to have fighter jets that are hard to detect, and why should India be an exception to it. In the coming years conflicts are going to be short and unpredictable. It is here that such aircraft could provide the crucial edge.

It is good to have advanced fighter jets to take out the enemy’s air defences. Remember the dogfight between Indian and Pakistani fighter jets in 2019 that resulted in the downing of an Indian MiG-21 Bison then. If the Air Force had the advanced stealth fighter in its custody such an incident would not have happened. Air power is important in today’s times. We need many more of these advanced fighter jets to strike terrorist camps in Pakistan.

The story on India’s fifth generation stealth fighter is a feather in your cap. THE WEEK was the first news publication to provide a detailed coverage on it. Great going!

Your cover story was explosive and informative. It feels good to know that India’s top defence scientists are building one of the world’s most advanced and lethal aircraft. But I fear whether these information that you shared could be used by our enemies.

Reading ‘The Long Way Home’ (May 1) reminded me of my trip to Srinagar in December 2018. Back then, I felt bad when I saw soldiers, bunkers and the anti-India slogans all over the town. I wondered where it would all lead to eventually.

But a small encounter with a Kashmiri Pandit at the airport changed my perspective. He was a professor from Delhi. He told me he was visiting Kashmir for the first time after he and his family had fled many years ago. He had longed to see his ancestral home. When he visited his village, the elders there recognised him and insisted that he and his wife come back the next day. When they returned the following day, they were moved by the welcome dinner organised by the residents of the village. They gave them plenty of shawls, dry fruits and other gifts to take home. When the professor told them that he could not take everything as he would have to pay for the additional weight at the airport, he was advised to abandon the clothes that he had packed for the trip instead!

It was then that I suddenly saw hope for Jammu and Kashmir. According to your article, things seem to have further improved from then on.

I want to know why the title Pandit is being given indiscriminately to Kashmiris, when it is not easy for one to earn the title. Jawaharlal Nehru and his father Motilal Nehru may have been addressed as Pandits, with respect, for their great scholarship, but it is debatable whether even they should have been called Pandits, where the original understanding was that a ‘Pundit’ was a veritable authority on the Vedas and other Hindu scriptures and a great teacher.

Finally, what about other Hindus in Kashmir? Can we know something about their recent history?

I know of many government contractors and their agonies and apathies (‘One death, many skeletons’, May 1). They have expressed their helplessness regarding the system which is controlled by greedy politicians.

As citizens and prudent taxpayers, the general public has to suffer due to bad quality of work—so many bridges and flyovers have collapsed, and roads are damaged because of floods. Now is the time to wake up and open our eyes, so that we can teach a lesson to corrupt officials and politicians.

It is the general perception that most politicians, irrespective of their political affiliations, try to extract as much as possible when they come to power, so that their next seven generations could live a luxurious life. The death of the contractor, apparently under political pressure for an exorbitant ‘cut’, is just the tip of the iceberg.

Abhishek Bachchan is a good actor who has come of age, but it is unfortunate that most of his films do badly at the box office (‘Being himself’, May 1). It is wrong to compare Abhishek with his father, Amitabh Bachchan, who was in a different league all together. It is difficult for sons or daughters to come out of their parents’ shadows.

May I take this opportunity to thank Sachidananda Murthy for writing a wonderful column (‘One India; one detective?’, April 17). Please go on publishing such intellectually stimulating write-ups.