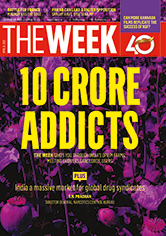 THE WEEK’s cover story on India’s opium farms, ganglords and users was an eye-opener (‘How India gets high’, April 24). There should be zero tolerance against people aiding and abetting drug trafficking in the country. Bringing opium cultivation under government’s control could resolve the problem to an extent, and it should be seriously considered.

Also, there are plenty of big fish on the drug scene in the country, and most of them have the reach and influence to go scot-free. Only if the government takes action against such people will we be able to eradicate the drug menace in the country.

The demand for drugs in the country has been increasing like never before, which is quite unfortunate. Young people are addicted to drugs and alcohol due to many reasons.

Parents, today, have less time for children. Giving too much of pocket money to children, along with providing them with whatever they ask for, is going to spoil them.

Private schools are also to be blamed, for they are not teaching children moral values. The addiction of young people towards drugs is not a social disorder, and the police have little role to play.

It is our moral responsibility to put our youth on the right track, and that should begin from home.

It is the constitutionally mandated duty of Union and states, under Article 47, to make all possible endeavours to prohibit the use of intoxicating drinks and drugs, to protect our youth from the drug menace.

All regulatory, security, intelligence and investigating agencies should come forward—putting their rivalries aside—to work together towards vanquishing the drug hazard from our soil.

Why should you highlight Prakash Karat’s quote? Who cares for what he has to say! The CPI(M) has no relevance nationally. Karat has never won popular elections or led the masses. He became the party’s general secretary because of his clout and the JNU connection (‘Point blank’, April 24).

Sachidananda Murthy said a petrol pump that belonged to a Samajwadi Party MLA was levelled for being an illegal construction (‘Powerpoint’, April 24). To the best of my knowledge this petrol pump was demolished based on the judgment of the High Court a year ago, and hence there was nothing illegal in the action of the Uttar Pradesh government.

A king like Ashoka had risen above caste boundaries and saw everyone with the same eye, which gave him the title—‘Ashoka the Great’. Unfortunately, today’s politicians are fighting over useless things like the caste of Ashoka.

Politicians must take inspiration from kings like Ashoka and Akbar. They must ensure equality and not talk about castes (‘Party snacks’, April 24).

‘Pogonology’: only R. Prasannan could have raised it. His keen eye does not miss anything (‘PMO Beat’, April 24).

KGF Chapter 2 has dominated cinemas pan India. It is for the first time that regional films are breaking box office records in the country (‘The big picture’, April 24). Telugu, Kannada and Tamil film industries are rich in content, invest in technology and market films far better than Bollywood. I feel southern film industries will continue to do better than Bollywood films in the coming years. Actors like Prabhas, Yash, Ram Charan and Junior NTR are national superstars today.

I concur with the views expressed by Mani Shankar Aiyar in ‘Manifesto’ (April 24). I also liked Aiyar’s reference to the observation of P.D.T. Achary that secularism should be considered as “the state has no religion”. But, in our country it is observed all religions are equal, and to emphasise this rulers offer prayers at temples, mosques and gurdwaras.

I appreciate the stand taken by Jawaharlal Nehru in not allowing president Rajendra Prasad to attend the inauguration of the restored Somnath Mandir. It is sad that Narendra Modi has taken a diametrically opposite stand by laying the foundation stone of the Ram Temple.

I feel our leaders would do well to desist from visiting religious places in official capacity. They should pray in the privacy of their residences.

It appears the Karnataka government, instead of focusing on development, working for the benefit of the underprivileged and aiming at social transformation of people, has initiated a negative approach against Muslim community, and is trying to destabilise the otherwise good relations between communities (‘On a knife-edge’, April 17).

The Supreme Court of India should, suo motu, direct the Karnataka government to withdraw the relevant orders and direct people to refrain from agitation in the interest of peace.