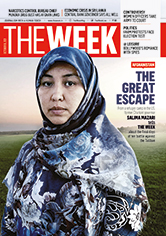 Your cover story underlined the social trauma and the true spirit of women in Afghanistan (‘Cheating death’, October 10). It felt like reading a crime thriller, albeit without much bloodshed.

The extraordinary efforts of Salima Mazari, Najiba Noor Dilawari and Mahbouba Seraj to defend the rights of their countrymen are stupendous. Yes, the peaceful life of Afghan women is at stake under the Taliban.

Your cover story was riveting. Despite difficulties, these women reached the top rung of society in Afghanistan by hard work and determination. The brutal Taliban takeover has not only destroyed their dreams, but also has made them struggle for a peaceful living.

Salima and Najiba are perfect models for our society. They are like the silver lining in a dark cloud.

The article on Najiba, the valiant woman police officer from Afghanistan, exuded strength. Her narration about the encounter with the Taliban reflects love for Afghanistan and wrath for the Taliban.

The fact that Najiba had convinced her father, who came from a family of Talibs, to leave the Taliban and serve the country shows that she is a no-nonsense woman. Women like Najiba are the need of the hour in a new Afghanistan. Wherever you are, Najiba, carry on your mission.

Like Salima and Najiba mourn the plight of Afghan women, the whole world must grieve for not helping the Afghans when they needed it the most. It is true that some countries have helped Afghans in the past, but, then, they also abandoned it. All that has made it easy for terrorists to make Afghanistan a hotbed of terrorism.

Thanks to THE WEEK for highlighting the achievements of two strong women of Afghanistan—Salima and Najiba—who led from the front. But, unfortunately, they had to hide themselves.

Salima’s statement that the Taliban was nothing more than a paid labourer of Pakistan, and its aim was to drag Afghanistan back to its past, reveals her steadfastness. Mahbouba’s statements made for very painful reading. One can understand the depth of her sorrow. I am sure there are many more such good-hearted human beings in war-torn Afghanistan.

Navjot Singh Sidhu is not someone who can be trusted; he is not a team player (‘Disruptor-in-chief’, October 10). All that Sidhu wants is to become the chief minister of Punjab, and he is making it look quite evident. Sidhu is quite sad that he was overlooked for the chief minister’s post even this time. He only likes to sit, dominate and order things. He has done nothing to prove that he is good politician who is always at the service of the people. So let us stop taking Sidhu seriously.

There is no doubt that expressways and national highways have connected rural areas and have led to faster development and rapid urbanisation (‘Last word’, October 10). The US developed expressways in the early 20th century, linking the entire country on a massive scale that led to their position as the number one economy in the world. China is also doing the same for the past five decades.

India accelerated the development of highways under Atal Bihari Vajpayee in 1998, and under Narendra Modi it will certainly get a boost. There are issues like land acquisition, funding, finding the right agencies for execution, quality of supervision and corruption. But I am sure leaders like Union Minister Nitin Gadkari will apply their management skills to take the nation forward to match advanced countries.

The news that Tamil Nadu Chief Minister M.K. Stalin appointed non-Brahmin priests in 24 Hindu temples is music to the ears of many people across the country (‘Acts of faith’, September 26).

By doing so, Stalin has set an example for others; he has fulfilled a long-cherished dream of Periyar. For the last thousand years, Brahmins performed all religious, cultural, and traditional activities in our temples through their arcane knowledge of religious texts that was passed through bloodlines.

Hinduism is home to several castes. There should be equal room for each person to pursue a profession of one’s choice, on the merits of one’s qualifications not by one’s caste. Stalin’s initiative augurs well for India.

Learning from THE WEEK

I study in class seven. The ideas and thoughts I get from the WEEK are so splendid. I spend my free time reading the magazine. I thank my parents for introducing me to THE WEEK.

By reading the magazine I am getting good exposure, especially to Indian and world politics. Sometimes my teachers are surprised by my ideas. I like history and would like to read a cover story on the Delhi Sultanate.

I appreciate THE WEEK for informing us through the range of articles published. You are directly or indirectly helping so many of us. Here is a magazine that is inspiring, energetic, powerful and inspirational. Let me sincerely congratulate everyone at THE WEEK.