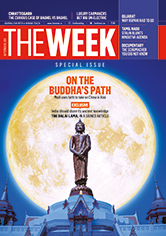 Your cover story drew my entire attention. Buddhism is not just a religion, but a way of life (‘From India, with love’, September 26). It had a great impact on politicians like Jawaharlal Nehru and many others. This is just like how Mahatma Gandhi, who never followed Christianity, was impressed by the teachings of Jesus Christ.

If politicians in India lead a value-based life, it will help the country as a whole. Let us bring back our values.

Your cover story has brought out the Buddha’s valuable teachings. There is no doubt that India is the spiritual home of Buddhists. Let Buddhists make the world a better place to live in. Let Buddhism shine and protect humanity.

China is increasingly asserting itself as the home of Buddhism. It has suddenly realised the importance of using religion as a means of diplomacy, taking a cue from Prime Minister Narendra Modi.

The Dalai Lama’s wish that India should share its ancient knowledge with the world was really applaudable. The most beautiful and long-lasting legacy of ancient India is its tradition of art, architecture, culture, language, literature, maths and science. Indian epics and mythological stories are full of morals for all of us. They can teach not only the art of living but also the various secrets of success.

I am disappointed with you for politicising Buddhism. Your articles conveyed that Buddhism is being revived by Modi. They implied that but for Modi, Buddhism would have been more or less forgotten.

Lalit Mansingh’s article said the International Buddhist Conference (IBC) has imploded. But, in the following page, you had an article by the director general of IBC.

It was quite bold of Tamil Nadu Chief Minister M.K. Stalin to have handed over appointment orders to non-Brahmin priests (‘Acts of faith’, September 26). This will eventually make Tamil Nadu a caste-less state, and has lessons for all.

I want to congratulate Stalin for having shown that courage. He will fulfil the dreams of Periyar by doing more of such things.

The general public, unless triggered by the government, are happy with Brahmins doing pujas in temples. Caste is forcibly thrust by a fanatical section to evoke unnecessary tumults. Any attempt by the Tamil Nadu government to change the old order is not democratisation but absolute destruction.

By this volatile exercise, the temple deities will not lose sanctity, but the government surely will.

Swara Bhasker’s tryst with camera might have given good file pictures for posterity (‘Bitter chocolate’, September 26). But it throws up intricate issues to be pondered over!

A person who is passionate about photography, or acting, could seldom lose any precious frame, be it sorrow or euphoria, or any other worthy moment.

Swara’s article reminded me of a photograph of a doctor who was trying to give a heavy dose of painkiller to a road accident victim who laid beneath the wheels of the truck writhing in agony. The photographer might have suffered severe mental stress while clicking the photo. But his passion for the camera did not let the stress overcome him. And, voila, one finally had a frame that spoke volumes.

I want to thank R. Prasannan for enlightening us on the origin of the Durand Cup, which was started by Mortimer Durand, who was India’s foreign secretary in 1880s. He drew the line between British India and Afghanistan. I am sure even football players who played in the 130th edition of the Durand Cup do not know this (‘PMO Beat’, September 26).

Friends with THE WEEK

“During this pandemic how do you pass time?” asked a friend. “By reading,” I said. My friend looked around and asked me, “Which book have you finished reading?” I showed him stacks of THE WEEK nearby. He was a little surprised and before he could say something I interjected, “This is a magazine that keeps you abreast of not only the whole spectrum of India but also of the happenings around the globe.”

Three cheers to THE WEEK. Keep it up, Philip Mathew.

THE WEEK is always successful in bringing out a wide variety of news. That is why readers are fond of your publication. Practically all articles are quite relevant to the present situation and are helpful for readers at all stages. Congratulations to the entire team at THE WEEK.