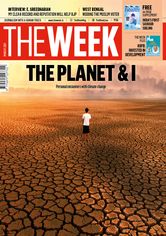 Your cover story on ordinary people exploring climate issues in various parts of the country was interesting and informative (‘Weathering the storm’, March 7). I am glad that the world, by and large, has started taking global warming and climate change seriously.

It is our duty to make the world a better place to live for our future generations. We should not be selfish, and should care about how the world will look like in 2070, or 2100, long after most of us are gone.

Our politicians should listen to the voices of change, who care for the future of the planet.

More than the rich, it is the poor who will bear the worst effects of climate change. China, followed by the US, has the world’s largest carbon dioxide emissions. The onus is on both these countries to avert climate change disaster.

Neither the National Green Tribunal nor the Delhi Pollution Control Committee can improve the air quality in Delhi, unless we, the denizens of Delhi and surrounding areas, become responsible.

It is due to our negligence and complacence that the air in Delhi is becoming hazardous. Till when will we expect miracles from the administration and not do our own homework sincerely?

My native village in south Tamil Nadu is located in a rain-fed area with a minor irrigation tank, which can irrigate about 120 acres of wet land. Seasonal rain ensured timely agricultural activities and rich produce. Now, for the past decade, drought situation prevails there, with agricultural land lying barren, occupied by thorny bushes.

People in the past worshipped nature. Now we are paying the price for our utter disregard for nature.

If Disha did something wrong, she should certainly be punished. But I feel the Delhi Police did not have substantial evidence to continue keeping Disha in custody. Or, did the Delhi Police do that to scare away people who engage in ‘such’ activities? Who knows!

The entire nation heaved a sigh of relief at the just, fair and bold verdict given by Justice Dharmender Rana, granting bail to Disha. It has rekindled hope in judiciary, and reposed faith in the courage of conviction. The idealist youth of this country, with a mind of their own, needs to be celebrated and not put behind bars.

What is happening in Puducherry is utter nonsense and should end; the BJP should stop such ‘operations’ to poach opposition MLAs. Or else it will lose respect (‘Poach and win’, March 7).

The BJP leaders think they can form governments in the remaining south Indian states, if they rule Puducherry. All I can say is that they are living in a dream world.

E. Sreedharan had changed public transport facilities across the country for the good of the people (‘If the BJP can stay united, it can at least become a kingmaker’, March 7). Who knows, the Central government can nominate Sreedharan the governor or president in the coming days.

In my view, if Sreedharan wins the election in Kerala, and a BJP-led coalition is formed in the state, he can be made transport minister.

A person of Sreedharan’s stature and integrity should keep away from the quagmire of politics. The BJP in Kerala, with all its infighting, wants to expand its footprint, and, hence it is piggybacking on the spotless reputation of Sreedharan. Considering his age and the risk of getting infected by Covid-19, Sreedharan should avoid large public gatherings. There is a world of difference between being a ‘metro-man’ and a
‘Modi man’.

In the perception of Sreedharan’s well-wishers he is already a king, and he need not get into politics to become a kingmaker.

An individual or a group might have mindlessly portrayed Disha Ravi as a Christian in the social media. It is neither known nor established whether any Hindu group or the BJP itself have any part in the act.

Shashi Tharoor has the right to hail and praise the Christian community and no one will largely object to the content of his column (‘Hate machinery’s new target’, March 7). But, it was surprising that the writer chose to pounce upon a relatively mundane issue to feel irked and defend the Christian community.

How is it possible to presume that the BJP has a hand in this prosaic action when the party has in its ranks leaders belonging to the Christian community like Alphons Kannanthanam and George Kurian? Again, no religion, leave alone Christianity, needs any defence as to its glory.

As one who has benefited in unfathomable measures from the education I have had from Catholic institutions, I went through the tribute paid by Shashi Tharoor to Christian missionaries and the educational institutions run by them in the country with a deep sense of gratitude.

It is heartening to see chaste Hindus like Tharoor rise above petty religious fanaticism to recognise the immeasurable services rendered by Christian institutions and other renowned Christians to the nation.