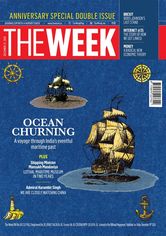 Thank you for the treat

The anniversary special double issue of THE WEEK was a sheer delight to read. It was also a visual treat. Both the issues had so much to offer. As a distressing 2020 came to an end, this was exactly what I was looking for.

The first issue on India’s eventful maritime history was so revealing and comprehensive. Today, retelling India’s naval history is significant and strategically important.

Why didn’t we officially record our maritime past? Why did we neglect coastal traditions? All that would have been of so much help today.

I am sure Indians were one of the first people to navigate the seas. We, too, would have had explorers like Columbus and Vasco da Gama.

We must continue to highlight our cultural superiority, and there has to be a deeper attempt on our part to understand and appreciate India’s rich maritime history (‘Tied to the tide’, September 27).

I was enraptured going through THE WEEK’s anniversary special double issue. I, especially, enjoyed the volume on India’s maritime past. In my opinion we should focus more on such issues, which give a fresh perspective. The illustrations for this package have come out well.

The lessons that 2020—annus horribilis, the year of the apocalyptic pandemic—has taught us are many, and were precisely and eloquently listed in your story (‘Autobiography of an unrepentant year’, December 27).

In his recently released book, Nobel Prize winner Paul Nurse defines life and its intricacies. He underscores our special responsibility to care for all forms of life. To counter the challenges that the human race faces, it is vital that we live in harmony with nature. This is one of the sacrosanct lessons that the pandemic has bared. Life throws up several questions and challenges and it is prudent not to search for all answers.

The mask may have shielded our smiles, but our sense of humour should be our strength.

The issue on India’s maritime past made for an interesting read. I also enjoyed reading the second cover story on how we found refuge in humour during the pandemic.

I liked the cover illustration by Bara Bhaskaran.

2020 was a bad year, but it has taught us valuable lessons as we move forward. We are all survivors. The year taught us to be humble and generous. But, in the process, sadly, some of us became self-centred.

The graphics on the phenomenal progress in communication media, from telegraphy to present internet era, turned me nostalgic (‘The .in revolution’, December 27).

As an octogenarian I looked back to the year 1944, when I was ten.

My father was a postmaster and the office was manned by him and an attendant. Back then, the telegram was the fastest mode of communication—operated by tapping a key emitting sound in two notes, as dot and dash in Morse code for different alphabets, and continued tapping for a pause.

Out of inquisitiveness I memorised the binary code and learnt to tap them out, too. The place was a busy commercial centre and there was a flurry of telegrams every day. Suddenly, one day, my father fell acutely sick, and, with his guidance, I managed to send an express telegram to the head office seeking immediate assistance. This instance remains etched in my memory till date.

Now, electronic media has taken giant strides in the field of telecommunication. Storage and transmission through analogue, via internet using spectrums of different wavelengths, has emerged in the form of computers, mobile phones and laptops.

Internet usage has become universal, occupying all commercial and business centres. Apart from ashleelta (vulgarity), as an offspring of digital revolution, an element of dehumanisation has seeped in.

With the advent of artificial intelligence and robots we can soon foresee humans and machines dancing together.

2020 was not a good year for Narendra Modi (‘Stainless steel’, December 27). Modi’s calculations went wrong on the day he said, “Mahabharat was won in 18 days, but the war against coronavirus will take 21 days.” Thereafter, Modi and team had a plan to announce a vaccine on Covid-19 for August 15 ahead of other countries. But it got leaked and the idea was shelved. Finally, the farmers’ protest has taken Modi by surprise. His government was not prepared for it.

The length to which the government has gone to convince farmers shows that the entire issue could have been better managed from the beginning. This issue is not going to settle anytime soon. Good luck.

An elected government is working on the mandate of the people to frame policies and implement it for public welfare. If every policy requires public opinion and an all-party approval, no decision can be taken.

Sonu Sood has ignited the flame of hope in the hearts of citizens of our beloved country (‘The road home’, December 20).

With his acts of kindness, a number of like-minded friends have joined hands with him, encouraging many more to follow the just path.

Let’s make it a habit to contribute our bit to provide happiness to those who have little or no means of survival.

Care for girls, not cows

It was distressing to read that the pandemic has forced many parents in Karnataka to marry off their minor daughters (‘Lawless wedlock’, December 20).

The effect of the pandemic on cash-strapped families should be an eye-opener for powers that be. Not just in Karnataka but all over the country thousands of underage girls are victims of a heartless society.

An aggressive campaign to educate the masses is the need of the hour. The government should show more interest in the safety of girls rather than cows. The POCSO act should be stricter in dealing with such issues.

The government should take the help of NGOs to track and avoid such incidents. Kudos to THE WEEK for publishing the report.

Where is the year planner?

The year planner was one of the most useful gifts that THE WEEK gave to its readers. Although such planners are available on the internet, THE WEEK’s planner was so user-friendly.