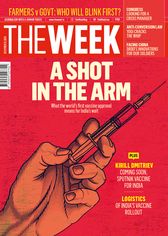 With the emergency authorisation of Pfizer-
BioNTech vaccine against Covid-19 in the UK, there is heightened anticipation for approval and rollout of a vaccine in India (‘Gift of the jab’, December 13).

Considering the novelty of mRNA platform, and the requirement of sub-zero temperature, live attenuated vaccines, like Covishield, are safer options for India.

The biggest challenge, which I foresee, is development of trust and equitable distribution of vaccines in India. Second, in the absence of long-term follow up, none of the vaccine makers have any data about the duration of sustained protective effect, requirement of booster doses in future and long-term effects of vaccination. The government and regulatory authorities need to address such issues to ensure a successful mass vaccination programme against Covid-19.

Hoping for better days ahead.

No single vaccine is going to act as a silver bullet against Covid-19. Safety, efficacy, logistics and cost factor are critical. Coordination at all levels is paramount for a successful immunisation programme. It is the collective responsibility of all to make sure that none in need is left behind to get a shot of the vaccine.

Do we need a CDS?

I agree with Laljee Verma, retired air marshal
(‘Letters’, December 13). The role of the Chief of
Defence Staff is to advise and coordinate the working of the three services. But, it seems CDS’s suggestions are just the opposite of what the service chiefs want. We were better off without the CDS. Political appointees should not head defence ministry or defence organisations. In the interest of the country, lessons must be learnt and executed.

Mamata Banerjee is under immense stress and it is showing (‘Trouble at the grassroots’, December 13). The use of force and violence against opposition leaders who visit West Bengal is unacceptable in a civilised democracy.

People of West Bengal are frustrated with Mamata. But she has a chance of coming back to power if she gets into a redemption mode at the earliest. First and foremost, she should shed her arrogance.

Congress is sure to miss Ahmed Patel. There are hardly any leaders in the Congress who can leverage goodwill beyond party lines and can strike crucial deals (‘A permanent void’, December 13).

To nurture another Patel is not easy. The onus is on the Congress to find a leader like Patel who can steer the party out of crisis, and guide the top leadership.

For a former minister of state for external affairs [Shashi Tharoor], who must be aware of the detailed examination of dual citizenship by the government of India, to call for dual citizenship to suit his family is unconscionable (‘Last Word’, December 13).

It is even worse to characterise the Overseas Citizenship of India as fraudulent. It is a device that equates foreign nationals of Indian origin with NRIs not just for travel, but also for ownership of land and other facilities within the framework of the Constitution.

Indians who become foreign nationals seek dual citizenship to have the best of both worlds. Globally, only very few immigrant countries allow dual citizenship and most countries prohibit immigrants from retaining their original passports because of the undesirability of divided loyalty.

Dual citizenship is a fair idea to keep diaspora grounded to Indian roots. It will keep Indianness alive and help Indians contribute to the nation's progress.

Mohammed Shami is one of our best fast bowlers and is performing consistently well (‘I enjoy leading the attack’, December 6). He is today in a position to help upcoming fast bowlers like T. Natarajan, who will be an asset for team India in the T20 World Cup in 2021. India needs more such fast bowlers if it wants to perform well abroad.

While I was in the ICU battling Covid-19, my son Alif gave me a copy of THE WEEK, which had a cover story on a coalfield in Jharia (‘For a fistful of coal’, December 6). An average of 25 children die in these mines each year, breathing toxins and developing lung diseases like tuberculosis, asthma and pneumonia. Poisonous gases like methane, carbon monoxide and sulphur dioxide are in the air. The families living close to the coalfields have no option but to send their children to collect coal. Among these children are college-going Suman Kumari, Naman Kumar, who is suffering from persistent coughs, and eight-year-old Anurag, who said he did not fear death in the mines because he had to make a living.

Mining here has gone on for ages, but there is no plan to change the lives of such people. A teacher and social worker said that rather than saving these children, the authorities were busy making a list of coal stealing children and deploying the CISF to prevent them.

Whether the term love jihad is justified or not, forced conversion of Hindu and Christian girls is a reality in Indian society. The girls are lured and exploited physically (‘Love and laws’, December 6). They are so brainwashed that they have no escape from conversion or their exploiters.

The vocal and mute

The farmer unrest seems confined to the northern region, especially Punjab (‘On fury road’, December 13). In other parts there seem to be no protests, although some regional parties are instigating some group for their own political advantage. Yet, the protest by farmers in Punjab is creating an impression that the entire farmers’ community is against the new law. The government should find out the opinions of farmers of the whole nation and then take corrective action.

The local body election will pave way for a political change in Jammu and Kashmir (‘System revamp’, December 6). The BJP government at the Centre wants to create a new set of leaders from the grassroots, who can challenge the Abdullahs and the Muftis. I am looking forward to the election results. The verdict will be seen as a referendum on the abrogation of Articles 370 and 35A.

Sadhguru is a guru with a difference, and is one of the wisest spiritual leaders that we have in the country (‘The cool guru’, December 6). He explains things in a simple and logical manner.

Most spiritual leaders, today, talk irrationally and make a mockery of themselves. That way, Sadhguru is quite different. The Isha Foundation has reached the level that it has today because of the hard work of Sadhguru and his team.

Your interview with Bhupesh Baghel was insightful (November 29). He said the Centre did nothing but issue instructions on Covid-19. He is wrong. It is states that have to manage ways to tackle the virus. The Centre can only assist the states. India, as they say, does as well as its states do collectively. States are the implementing agencies of Central policies.

Baghel, nevertheless, is a performing chief minister. The Congress has won important byelections in the state under his leadership. The Congress should nurture and promote leaders like Baghel if the party has to survive.

Barack Obama is one of the most intelligent presidents we have had in our lifetime. He speaks with so much clarity and is a good observer (‘The honourable ‘gangster’’, December 6). I agree that his descriptions of people and situations are so masterly.

Obama has analysed many of the Indian leaders properly. His description of Rahul Gandhi was apt, but it has put the crisis-ridden Congress in a further spot. It is a fact that Rahul has never been serious about politics.