The actor reveals how he landed a Netflix hit 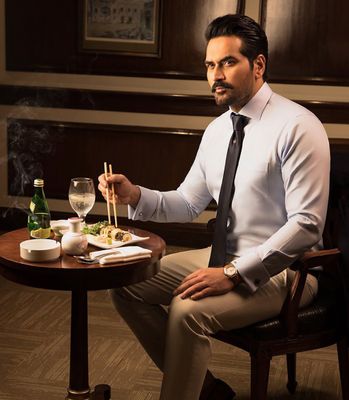 It was the worst of times for Humayun Saeed, actor, producer and entrepreneur. He had fever, burning eyes and crushing fatigue―he was just recovering from a nasty case of Covid.

Yet, it was the best of times. Saeed was up for a final meeting with the makers of The Crown, the hit Netflix series that premiered in 2016. The fifth season of the show was starting production, and he was being considered for the role of Dr Hasnat Khan, a British-Pakistani surgeon who dated Princess Diana shortly before her death. The meeting happened in the basement of his Karachi home, with him crouched over a screen as the unstable internet connection played havoc with the audio and video. He relaxed only after the producers said, “Fantastic.”

“I was hopeful that the role would be mine,” says Saeed, who had earlier passed two rounds of auditions. The first was a solo bit, where Khan explains heart surgery. The second was Khan chatting with Diana, played by Elizabeth Debicki, near a vending machine.

After the audition, Saeed told his agent to call him only if the part was his. Two weeks went without any call. “Yet, I still imagined him calling me and saying ‘Congratulations’ as his first word. That is exactly what happened,” he chuckles.

Known to be shy, Saeed was initially out of sorts on the sets of The Crown. Debicki reassured him that Peter Morgan, the creator, loved him. “One day, while giving her cues, I missed one line and was profusely apologetic. She said it was the best that could have happened, for I was so focused on not forgetting my dialogues. That put me at ease,” he says.

Prosthetics helped transform Saeed into the simple, slightly overweight Khan. Fans were initially dismayed by the look, but the actor was struck by the likeliness created.

He was, however, distraught at the mop of short hair plastered on his head. He did try to puff it up when he thought no one was looking, but the looks in-charge quickly flattened it back―along with the vanity actors tend to have about their looks. “When I saw the first shot, I promised myself not to see more, for my look would have distracted me,” says Saeed, who co-owns the fashion label Cast and Crew.

As many critics have pointed out, Khan’s track in the series ends rather abruptly. That was not the original plan, apparently. Saeed speaks of a scene that was cut from episode 9. “It was dramatic. She cries, implores him not to be scared, says they would go away… The scene would have given proper closure to the character. It did not make it to the final cut, even though the director fought hard for it. I understand that it is the queen’s story and a season has just 10 episodes. Plus, there was no point causing emotional trauma to her children,” says Saeed. 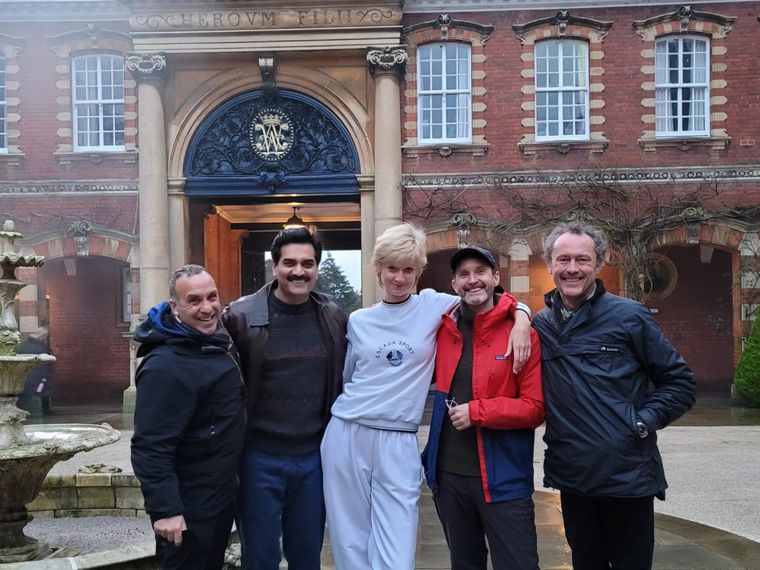 On a high: Saeed and Elizabeth Debicki (to his left) with crew of The Crown | Courtesy Humayun Saeed

A big elephant on the set for Saeed was the kiss with Debicki. He kept it from his wife, Samina, for a long time, saying the makers had done “a 360-degree shot with me puckering to a green screen and Debicki will be edited into it later”. A few days before the premiere, though, he confessed.

“She told me to be ready to take the flak,” says Saeed. “Thankfully, I got out of it rather easily. The larger conversation that happened was about how the audience back home would have reacted to a female actor doing it.”

Saeed is grateful for Samina’s part in his journey. He had been part of a successful garment export business when his boss suggested that he audition for a television part. Despite misgivings, Saeed did, and landed his first role. But after just two days of shooting―during which he told his family that he was working continuously at the factory―the director asked him to portray another role. To him, that felt like rejection.

In response, Saeed set up Six Sigma Plus, a film and television production company, with Samina. He wanted to prove that he could act. The first production, however, was so bad that he prefers that it remains unseen. Yet, after seeing some scenes, the director who had earlier asked him to switch roles cast him in another drama. It aired in 1996 on PTV, the state-owned broadcaster.

On the day the show first aired, Saeed ensured that the TV at home remained switched off. His family would not have supported the idea of sacrificing his business career for an uncertain future. When they finally came to know what he had been doing, it was Samina who stood by him.

“Initially, our production company had just four people,” says Saeed. “She was far better than me at management. From ensuring that lunch was served on time to signing contracts, she oversaw everything. Even today, I might not be able to get someone to agree to something; but when she makes a call, no one refuses.”

On screen, Saeed is like a calm ocean that mere pebbles cannot disturb. His acting has a still, subtle quality that is not always enthralling to the naturally uber-expressive Asian audiences. 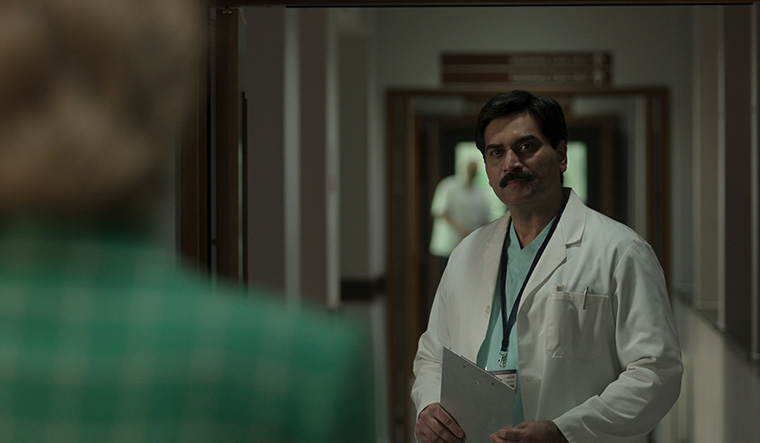 Living the part: Saeed as Dr Hasnat Khan in The Crown.

Saeed says he honed his craft thanks to a friend who introduced him to the work of greats like Robert De Niro, when he was hooked to Bollywood as a teenager. “Actors should control their gestures and facial expressions… In my early work this calmness came across as unimpressive, but when I tried adding unnecessary flourish, my directors stopped me. Slowly, it became part of my personality,” says Saeed. “Even today, if confronted by bad news, my reaction is measured. As actors, we have different ways of connecting with audiences. This stillness is my way.”

Pakistan’s entertainment industry was recently rocked by a censorship controversy involving the acclaimed film Joyland. The government had banned the film because of pressure from certain groups, but the decision was later reversed. Saeed has not seen the movie, but he knows that the controversy has roots in the presence of a transgender character in the film. One of his most popular productions, Khuda Mera Bhi Hai (2016), had such a character. “Censors had approved the film (Joyland), but the social media calls for banning it made the government fearful,” he says.

Saeed says viewer preferences have been a factor behind the tonal shift of Pakistani dramas, from a limited number of episodes that told character-driven, multi-layered stories shorn of excesses to productions that have a Star Plus-like format. “I have been told that when a woman stands up for herself in a drama, the ratings plummet,” he says.

As an industry leader, Saeed wants to tell compelling stories that do not succumb to the stereotypes of scheming mother-in-laws and toxic males. He admires the work of many new-age Indian directors and older ones such as Sanjay Leela Bhansali, Rajkumar Hirani and Vidhu Vinod Chopra. He looks forward to better days when artists from both sides of the border can meet and exchange ideas.

“It is not important that we collaborate,” he says. “But we should be free to appreciate each other’s work without fear of criticism. Our films should release in each other’s countries. We should meet. Why should it be so difficult?”

In 2005, at the Zee Cine Awards in London, Saeed and Shah Rukh Khan made their stage entries with songs from Khan’s cross-border love story, Veer Zara, playing in the background. The act ended with the line ‘Jaisa desh hai tera, waisa desh hai mera’ (loosely, our countries are similar), and the two national flags fluttering in the background. It was a goosebump moment.

And, were that to happen again, it would be a return to the best of times.