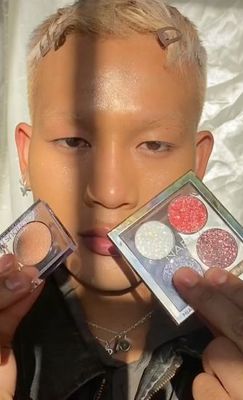 Short video format aficionados celebrated Halloween with a beauty trend that demanded an Edward Cullen-esque sparkle. For those who need a refresher, Edward Cullen―the protagonist of the vampire-themed romantic fantasy Twilight―has skin that sparkles in sunlight.

Edward and the other Cullens of his family might have wanted to keep a low profile and stay in the shade, but Tik-Tokers and Instagrammers are not ready for that. Instead, they want to flaunt their shiny complexion and challenge others to follow suit.

Beauty influencer August Sombatkamrai started the trend, where he mixed together MAC Cosmetics Studio Fix Fluid SPF15 Foundation, Made by Mitchell Blursh Liquid Highlight in Drip Drip and Beauty Bay Crystal Eye Shadow in Precious Topaz. This mix was blended onto his face with a dense brush. For some extra sparkles on the cheekbones, Sombatkamrai used Urban Decay’s Moondust in Space Cowboy. The brow bone, nose, cheekbones and temples were then dusted with Nabla Cosmetics Miami Lights glitter palette. Sombatkamrai explained in his video that his version of vampire skin looks best under the sun and club lights.

The video he posted garnered over 1.3 million views, and social media users came up with their own glittery versions of this look, to mimic an over 100-year-old vampire this Halloween.