For this performance-centric band, exuberance is everything 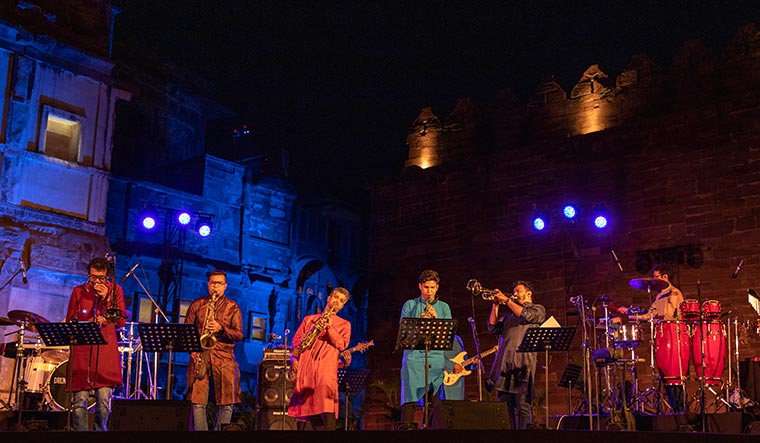 There is a song titled ‘Prime Sinisters’ in the repertoire of Bombay Brass, a Mumbai-based punk-jazz band comprising some of the finest horn players, including saxophonist Rhys Sebastian, who is almost like the group’s “band-master”.

When you start playing the song from a personal device, you think your system’s volume has gone down. But three seconds down, when Sebastian interjects, “keep it rolling”, it rises again. Now they are blaring full horn, all 11 members in sync, their adrenalin transmitting to the listener in a snap. When Bombay Brass performed ‘Prime Sinisters’ at the recently concluded Jodhpur Rajasthan International Folk Festival (JRIFF), they did not quite dwell on the story behind the name. But the audience responded like it was trailing behind a boisterous baraat (wedding procession). Or navigating a rambunctious chase in a busy street with a perfectly synchronised orchestra of car horns.

For this performance-centric band, exuberance is everything. Their smooth, high-energy instrumental pieces can conjure visions in technicolor. “The point of the act is the full energy of the brass,” says Jehangir Jehangir aka JJ, the band’s drummer, a day after their performance on a breezy night at Mehrangarh Fort.

When we think of brass bands, we think festivities: Processions and pujas, weddings and births. Often, they are part of funerals too. Trumpets, trombones, clarinets, bagpipes, saxophone and shehnai (an Indian musical instrument) are de rigueur, as are the military uniforms, turbans and moustaches. A typical set will include numbers from filmy songs to folk tunes and western pop blockbusters. It was the British military which introduced the modern markers of the European marching bands in India. In the 1980s, almost every city in India was bursting with these concert bands. Today, the shehnai is almost on its way out and few think of brass bands performing onstage at a ticketed event. So, what does a modern brass band, clued in to the metropolitan beats of an urbane, cafe-resto-bar kind of India, look like? Bombay Brass might just have the answer.

Formed in 2019, Bombay Brass is that rare independent brass band in India belting out original pieces. “We started off with covers and one original, and now we have several originals and perhaps one cover in our performance sets,” says Sebastian, who has led brass arrangements in several Bollywood titles and ad jingles. He has worked with the Symphony Orchestra of India, Lionel Richie, beat-box sensation Dub FX, A.R. Rahman, Louis Banks and Ranjit Barot. He is also the musical director and bandleader at Mikey McCleary’s ‘The Bartender’, which is known for reinventing evergreen Hindi songs into modern, retro treats. Remember the sultry ‘Khoya Khoya Chand’ with a Dracula twist? It was at ‘The Bartender’ that the idea of Bombay Brass was born. With musical influences ranging from Shankar Jaikishan, Niladri Kumar and Blackstratblues to Snarky Puppy, Trombone Shorty, Vulfpeck and Steely Dan, Bombay Brass is now a homegrown, contemporary Indian instrumental band inspired by the eclectic sounds of Bombay. And the members include known faces in the commercial and indie music circuit of Mumbai like JJ, Ramon Ibrahim on trombone, I.D. Rao on tenor sax and Zohran Miranda on electric guitar, among others. They also have musicians on flute and sitar. One of their recent compositions, ‘Quegdevelim Sunset’ (named after a lesser-known beach in Goa), was used in the soundtrack of Mira Nair’s A Suitable Boy.

The whole idea of creating a separate, curated baraat set came from supporting Ritviz and Nucleya’s 2021 Hindi album, Baaraat. “We enjoy doing it because it is music steeped in the film culture that we identify with and grew up listening to. It is just that we do it the Bombay Brass way,” says Sebastian. And hence, when Bombay Brass performs those forever foot-tapping numbers like ‘Chumma Chumma’, ‘Humma Humma’ or ‘Chin Chin Choo’ in their inimitable way, you suddenly begin to appreciate the shared joy of loud, celebratory wedding processions a lot more. Even in the original sets, where one can be alerted to influences from Hindustani classical, there is that unmistakable sense of shared joy. “In my humble and limited experience of playing fusion with great musicians like Louiz Banks and Ravi Chary, I always felt like there was scope to do a lot more with it,” says Sebastian. “It took time to develop and I struggle to play that kind of music, but I found a way to make it easy for myself. So, as a band, we make sure we enjoy playing those tunes and melodies by making them accessible for other artists, musicians and the audience.”