Effingut in Delhi: This one's for you, beer buffs! 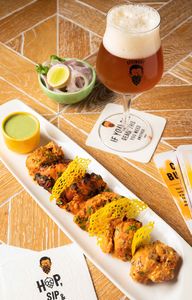 At Effingut in Delhi, you might find yourself “levitating”. Dua Lipa’s soaring anthem, a fixture on pub playlists, is one way to describe the first proper craft brewery in south Delhi. Until now it was Gurugram, famous for cut-price booze, that boasted some of the best micro-breweries in the Delhi-NCR region. But after much tarrying, Effingut has a great new address after Mumbai, Pune and Kolkata. At 7,000 sq. ft., the 190-seater pub is also Delhi’s largest craft brewery complete with a giant sports screen and a taproom right at the entrance, with 16 styles of craft beer, meads and cider. Just in time for the football season, Effingut in Delhi has a very Bengaluru brewpub vibe, a nifty playlist and a smoker’s annexe the size of a restaurant. They are also trying to revive the (almost nonexistent) culture of pub quizzing in the city.

There has been a gradual uptick in the sale of craft beer in the capital. Delhi’s old excise policy―which allowed the building of microbreweries and on-site consumption of craft beer―was reinstated on September 1, with licences for microbreweries being distributed once again. Seven more microbreweries might come up in Delhi soon if things go according to plan, as the government wants more “soft liquor” establishments. While there are two microbreweries already operating in south Delhi, the opening of Effingut on this scale bodes well for beer buffs who will easily appreciate the richer, more distinct flavours of the freshly brewed beer called craft.