Recreating the magic of Mughal-e-Azam 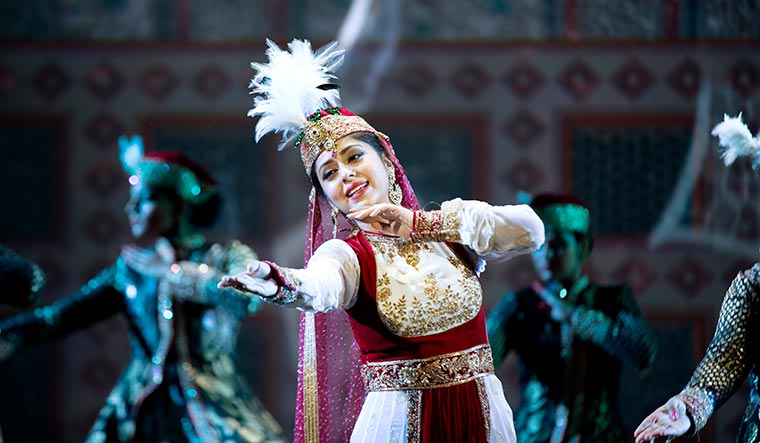 Wooing her prince: Neha Sargam, who plays Anarkali in the play.

It is a late Monday evening, and a largely empty auditorium at Bandra in Mumbai is about to witness an epic battle. Emperor Akbar and Prince Salim—of the 1960s’ classic Mughal-e-Azam—are confronting each other. Akbar is dressed in body-hugging blue T-shirt and denims. Salim, his son, is in a black tracksuit. Both of them are wielding swords, and are being carried by extras standing in for horses.

A number of soldiers—in kurtas and denims, and holding flags and props denoting the infantry and cavalry—soon charge across the stage. Another group runs hither and thither to simulate chaos. The stage is lit up in dark grey and shining silver, and in its backdrop is a palatial fortress. What is happening is a rehearsal—the effort is to recreate the elaborate battle scene in the film.

Watching a big-screen magnum opus play out as a Broadway-style musical can be surreal. But the settings are magnificent enough. The epic Sheesh Mahal dance number in the film—‘Pyar kiya to darna kya’, aced by the ever-charming Madhubala—comes out alive in all its resplendence.

Indeed, there are limitations of space and technology to precisely recreate Anarkali’s reflections in the hundreds of tiny mirrors, as shown in the film. But the stage version overcomes them, thanks to dozens of glass panels dangling from the ceiling. The experience is elevated as Anarkali (played by Priyanka Barve and Neha Sargam) actually sings on stage to a pre-recorded orchestral and choral score, boosted by the reverberating sound of ghunghroos (anklets) worn by the dancing crew.

The only snag: When the stage is being cleared for the next scene, something snaps and two large wooden frames in the roof come crashing down. Fortunately, the actors are all unharmed. They step down from the stage, as the production crew comes in to fix the problem. 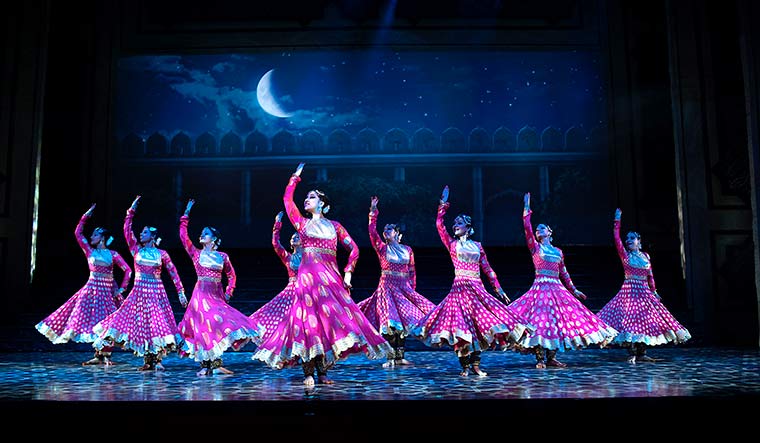 Love is in the air: A still from the musical Mughal-e-Azam.

This is day one of the rehearsals for the new season of Feroze Abbas Khan’s Mughal-e-Azam, the acclaimed stage musical based on K. Asif’s film of the same name. The entire cast and crew is coming together on stage after three years; their last performance was in Dubai just before the lockdown. Khan’s Mughal-e-Azam will have multiple screenings in Mumbai from October 21 to October 30.

Known for plays like Tumhari Amrita and Mahatma vs Gandhi, Khan says his attempt was not to recreate the timeless original. “Attempting it would be an insult to the original,” he says. “This is not even a remake. This is simply taken from the film as it is. In fact, we have ended up cutting down on the length quite a bit.”

The scene in which Salim gently strokes Anarkali’s face with a feather, and such scenes that required intimate close-ups and sharp focus on facial expressions, were omitted because it would have been a challenge to replicate them on stage. At 140 minutes, the play is nearly an hour shorter than the film. 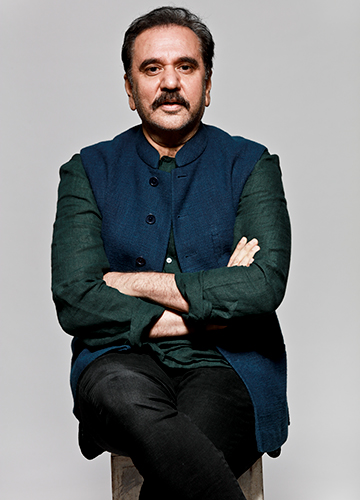 The plot remains the same, though. Much to his chagrin, Akbar discovers the romance between Salim and Anarkali, a beautiful but lowly courtesan. The prude emperor’s efforts to end the affair result in a battle between him and his son, which threatens the very existence of the Mughal empire.

The musical, produced by Shapoorji Pallonji Group, debuted in October 2016 and completed hundred shows in 2018. Khan says he had a hard time approaching producers initially, as “people were aghast [at the idea of a stage adaptation] and predicted that the show will be a complete disaster”. One reason was that, over the years, the characters of Salim, Anarkali and Akbar had become so associated with Dilip Kumar, Madhubala and Prithviraj Kapoor that the very idea of an adaptation had become preposterous.

Khan describes the play as “nuanced, intimate and subtle with a strong female voice”, one in which actors were given the freedom to present their own interpretation of their onscreen counterparts. “Feroze sir told me that you cannot become Madhubala, and that I don’t have to be her,” says Sargam. “I had to be my own Anarkali, because recreating Madhubala’s charm was impossible.”

The musical is mounted on a grand scale, with lavish costumes, choreography and lighting. In 2017, it won seven of 14 BroadwayWorld India Awards, including best play, best director and best costume design.

The choreography, by sisters Mayuri and Madhuri Upadhyay, has especially been praised. “Every season we have a new batch of dancers,” says Mayuri. “Six dancers have been with us from season one.”

All dance sequences in the film are based on kathak. So Mayuri set only one condition for dancers in the play—they have to “live and breathe kathak”. “The auditions got us dancers from across India,” says Mayuri. “This season we have 24 dancers.”

The iconic ‘Pyaar kiya toh darna kya’ piece from the original was given a “fresh treatment”, because she knew that she would “never be able to match it”. Initially, the song given to her lasted three and a half minutes. “I told Feroze sir that this had the scope to become a longer piece. Eventually the final sequence lasted for a good seven minutes,” says Mayuri. “The first section of it [is] Anarkali’s solo… creating that took the longest in the entire choreography. All my dancers fight to bag that solo.”

As the rehearsals progress, the stage reverberates with the thunderous sound of ghunghroos as thirty dancers move to the tunes of the classic song. And then, towards the end, the music comes down to just a single ghunghroo. It is one of the many beautiful moments where the play diverges from the film—making the new Mughal-e-Azam all the more endearing.