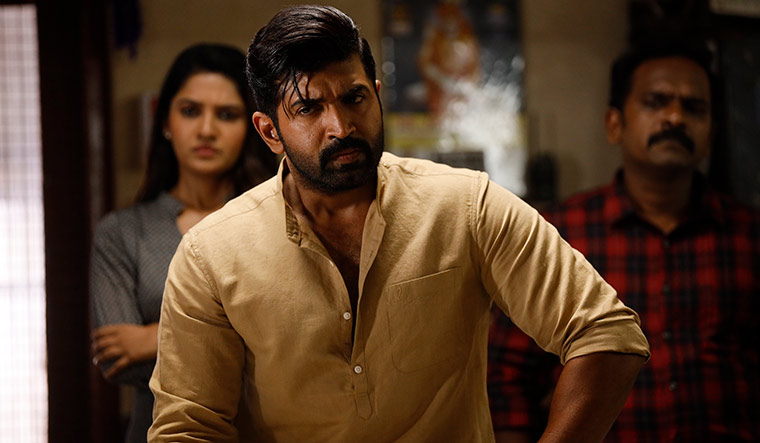 Hot on the trail: Arun Vijay plays a ruthless cop in Tamil Rockerz.

In 2007, when Sivaji: The Boss, produced by AVM Productions—the oldest active film production house and studio in India—was released, Aruna Guhan was a student at Stella Maris College, Chennai. Her father, M.S. Guhan was helming AVM then. One of Aruna’s classmates asked her for a shocking favour. “That girl asked me whether I could help her to get a pirated DVD copy of Sivaji,” she says. “Being a producer’s kid, I have first-hand experience of what piracy can do to people working in the film industry.” Aruna and her twin sister Aparna now lead the operations at AVM Productions. Through their debut web series, Tamil Rockerz—directed by Arivazhagan Venkatachalam and released on Sony Liv on August 19—the AVM sisters hope to make the audience aware of piracy’s damage to film industries.

Tamilrockers is synonymous with piracy in the south Indian film industries. It came into prominence as a public torrent website that offers links to pirated copies of films. There are many different versions of the notorious group’s origin story. A 2017 interview in VoxSpace of Bhaskar Kumar—supposedly a founding member of the group—says that its origin is connected with AVM’s anti-piracy actions. Kumar’s version was that Tamilrockers was founded in 2007, after the release of Sivaji. Bhaskar used to own a popular CD rental shop in Saravanampatty, Coimbatore. He would buy stockpiles of porn CDs from Chennai-based Daniel Raju, who would later become the mastermind behind Tamilrockers.

Sivaji, a mega-budget Rajinikanth-starrer, was hugely hyped, and many CD rental shops profited from selling camrip DVDs of the film. But then, when AVM complained, the anti-piracy cell of Tamil Nadu police raided and closed down many of these shops. Thus, Raju came up with the idea of uploading films on torrent. Bhaskar, Raju and four others started working from a shed in Nungambakkam. The group uploaded Camrip, Webrip and DVDrip versions of films. Soon, they built a loyal consumer base. Producers, distributors and theatre owners became part of their global piracy network.

Tamil Rockerz is a fictional take on the myths and facts about its namesake and other similar groups. “Our research was on how piracy works,” says Manoj Kumar Kalaivanan, who co-wrote the series with Rajesh Manjunath. “The story is not about Tamilrockers or any particular group alone. We got all the information available on piracy, and then created a fictional world around it.”

The story revolves around the piracy group Tamil Rockerz threatening the producer of a “300 crore film” and its ‘golder star’, Aditya. Ruthless policeman Rudra (Arun Vijay) is out to nab the group, after suffering a personal tragedy at its hands. The series’s eight episodes take the audience to the dark underbelly of piracy. There is a serious effort by the makers to explain to the audience how piracy works—technically and financially. These explanations, however, are embedded in a narrative that fails to emotionally connect with the audience in certain parts. However, the series touches the right notes when it makes crucial observations about the grey markets selling pirated films, and how piracy affects people at multiple levels.