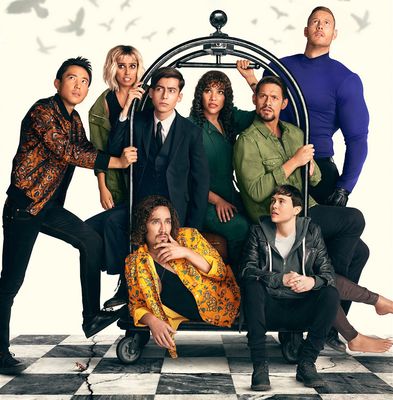 The Umbrella Academy - Available on Netflix

A “kinky black hole” doesn’t care about your pronouns—he, she and they are all just cosmic fodder. That is how the makers of The Umbrella Academy handle the real-life transformation of actor Ellen Page to Elliot Page. The Oscar nominee plays Vanya Hargreeves on Netflix’s hit show. The story, in short: an eccentric billionaire adopts seven super-powered babies and makes them a crime-fighting team for his sinister designs. They disband after one of them dies young, but reunite when their father dies. They then go on adventures spanning timelines and centuries, trying to stop one apocalypse after another. Loosely based on the original from Dark Horse Comics, the show is one of the few comic-book adaptations that have thrived outside of Marvel and DC.

Season three continues the chaos. The siblings have another apocalypse to stop; this time they face a rival team of superhero siblings and are stuck in a hotel that they can never leave.

The show touches upon heavy topics such as racism, trans-rights and mental health, but never lectures. This season dilutes the soap-operatic family drama, adds more self-deprecating humour and sprinkles in a liberal dose of banter. It also throws in some light-hearted nihilism for good measure.

When Vanya (Page) comes out as Viktor, the siblings just nod and move on. There are more pressing matters at hand. Viktor, on the other hand, is now more confident and assertive, and speaks and does more. The transition is handled tastefully, even if it gets just a few minutes.

Netflix had copped hate for platforming stand-up comics—most recently Ricky Gervais and most notably Dave Chappelle—who seemed to be attacking the LGBTQIA+ community. With this season of The Umbrella Academy, the streaming giant might have some love coming its way.

As for the negatives, there are a few. The rival academy has mostly one-note characters, the time travel is hard to keep up with, there are convenient plot-moving tropes, and also a sexual assault scene that is problematic beyond the obvious reasons.

There is no official announcement on season four yet, but given that the show feels more comfortable in its skin with every passing instalment, the next set of episodes will have greater expectations. And another apocalypse, surely.

P.S. The soundtrack is still banging. Jeremy Renner, Hawkeye to Marvel fans, sings a vocally acrobatic rendition of ‘House of the Rising Sun’. It’s a quirky touch to what is one of the most wonderfully weird shows going.