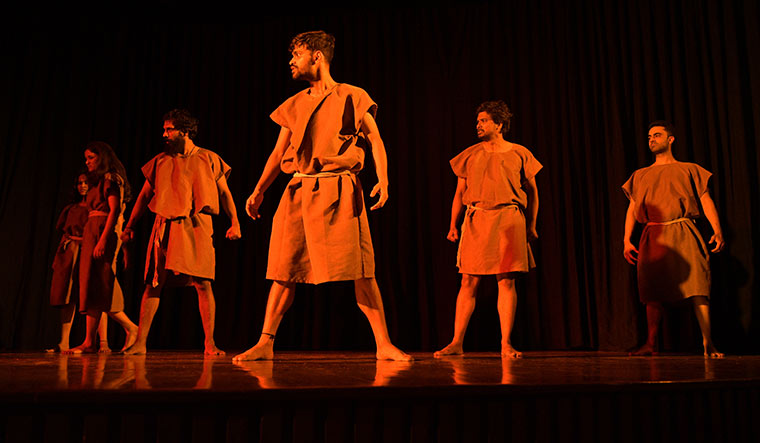 Spartacus led the revolt of slaves in Rome in 71 BC. Howard Fast published a novel on the theme of the revolt in 1951. Stanley Kubrick made a classic film based on the novel in 1960. Badal Sircar adapted the story into a play in Bengali in 1972. Hasn’t everything about Spartacus been told, staged and filmed?

No, says theatre activist Tarique Hameed who has come out with a Hindi production (translation done by Rati Bartholomew and Virendra Saxena) of Sircar’s play through Delhi’s Wings Cultural Society. “The Spartacus theme is very contemporary,” he says. “The Roman empire ended long ago, the Caesars and the generals died, but the evils against which Spartacus and his army of slaves fought remain in today’s society, too. Sircar’s play is about human bondage—not just slavery in ancient Rome—and that exists in our society, too.”

Tarique Hameed’s production, staged recently at Delhi’s India International Centre, vindicates the Spartacus spirit that Sircar had captured. The play revolves around five actions—capturing of people; selling of the captives in the market; slaves toiling; gladiator-slaves fighting in the arena; and the crucifixion of rebel slaves.

Sircar, it is said, used the human body to develop the action in the play. He performed it often in empty rooms, parks, street corners and remote villages, with the audience sitting around. The play is a tragedy in the conventional sense of the term, but the audience leaves the hall with a sense of triumph. For, even as Spartacus and his warriors are crucified, his heroic spirit triumphantly pervades the hall. Music by Ayush Sharma and Rochana Vidya captures the sense of both tragedy and triumph.